Although the market capitalization of all cryptocurrencies is still bouncing around the $1 trillion level and has not yet reached its peak, there has been a general upward trend in the value of the major coins.

With the recent increase of more than 50% in the price of Ethereum (ETH), it is only a matter of time until Bitcoin (BTC) follows suit. Earlier today BTC hit the $25,000 mark before hitting reverse.

A well-known cryptocurrency analyst believes Bitcoin may have already printed this cycle’s low and forecasts a boom for a prominent Ethereum rival.

Is Solana finally going to put in a big move?This daily looks good and we haven't seen nearly as much mean reversion as I would expect. $Sol — Clark (@CanteringClark) August 11, 2022

Cantering Clark, said that the smart contract platform Solana (SOL) is preparing for a move that could lead to a significant price increase. He claims that SOL appears to be compressing and consolidating in order to fly. We haven’t seen nearly as much mean reversion as I would anticipate, and this daily [chart] seems healthy.

According to the analyst’s charts, Solana’s next significant barrier may be around $75. SOL is trading at $46.47 at the time of writing, suggesting a potential gain of roughly 60% for the Ethereum rival.

Regarding Bitcoin, the trader hypotheses that BTC returning to its weekly timeframe support level of $20,000, which it reached at the peak of the 2017 bull market, could be a suitable bottom indication.

“Crowds, is it possible that Bitcoin really was this simple? Everyone talking about a drawdown that should match prior drawdowns but disregarding the fact that the recent bull market was less intense than priors. We kind of did revert to a good historical mean regardless.”

He then points out that Bitcoin rose more than 11,000% from the trough of the 2017 bull market. In contrast, during the bull market of 2021, Bitcoin only experienced gains of about 2000%.

Bitcoin is being very dull and giving the impression of weakness."Never short a dull market"This kind of reminds me of 2020 structure off March lows..— Clark (@CanteringClark) August 12, 2022 After Another Major Hack, What’s Awaited for Solana(SOL) Price in the Coming Days? 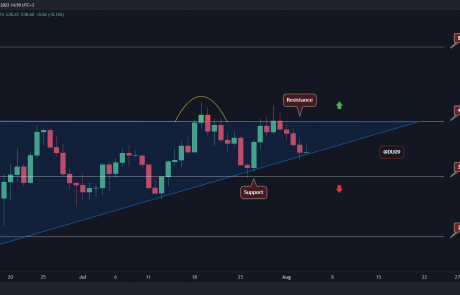