Solana’s [SOL] descending channel course finally saw an upwards break over the last week. After closing above the 20 EMA (red) and the 50 EMA (cyan), the buyers depicted their edge in the current structure.

The recent reversal from the 61.8% Fibonacci level could see a rebound from the near-term EMAs. A drop below the 50 EMA could delay the likely recovery prospects. At press time, SOL was trading at $41.9175, down by 7.34% in the last 24 hours.

SOL’s long-term down-channel pulled it down toward the $28 baseline until mid-June. The south-looking tendencies had impaired the near-term buying rallies.

Over the last two months, the 61.8% Fibonacci resistance has kept a strong check on the rallies. After the recent breakout, the bulls have recouped their vigor but the golden Fibonacci level has curtailed the buying efforts.

The price action now seemed to consolidate near the 50 EMA. A bounce-back from this level would confirm a bullish hammer in the daily timeframe. In this case, potential targets would rest in the $46-$47 zone. An inability of the buyers to inflict a strong rally could only aid the sellers in extending the sluggish phase.

The Relative Strength Index (RSI) found a solid spot beyond the midline resistance over the last few days. A sustained close beyond the 60-mark would reaffirm the buying endeavors in the coming days.

Also, the CMF took off from the 0.06 support and blended with the bullish narrative. These readings can help buyers ensure the 50 EMA support.

Interestingly, the MACD finally found a spot above its zero-mark. A sustained position above this level would indicate a gradual shift of momentum in favor of buyers.

Given the bullish break above the pattern alongside the north-looking 20 EMA, SOL could see a comeback rally while facing a hurdle in the $46.5-region. The triggers and take-profit levels would remain the same as above.

However, investors/traders must keep a close eye on Bitcoin’s [BTC] movement to determine its effects on the broader sentiment. Solana [SOL] traders can leverage this pattern to their benefit 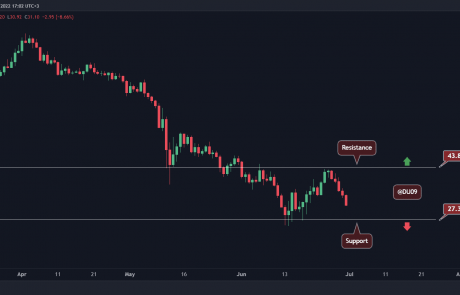