Cryptocurrencies are gaining traction in prominence with each passing day. The yearn to learn the forecasts of digital assets has been soaring to greater heights. One crypto-asset which has been under due consideration of marketers since the start of the year is XRP. Which comes following the constructive developments in ripple ripplem***[email protected] / Blockchain SolutionPayment solution Followers : 0 View profile lawsuit with the SEC. Leaving that aside, Ripple has been spreading its wings toward global cross-border payments, CBDCs, and NFTs. Which justifies the quest for long-term price predictions. Join in with us in our odyssey as we decode the possible XRP price predictions for 2022 and beyond.

Ripple’s trading volume has been rather consistent off-late. The firm’s lawsuit with the U.S SEC has been witnessing constructive developments and is likely to find an outcome in its favor. In a recent update, U.S District Court Judge Analisa Torres has turned down the SEC’s motion to withhold the popular Hinman documents. With a positive conclusion to the lawsuit, XRP’s price could propel to its potential high of $0.6445.

On the contrary, if the lawsuit finds any other delay or motions, the price could close its trade at $0.4683 That said, usual buying and selling pressures would land the price at average levels of $0.5652.

By the end of 2023, if the series of events occur as predicted. Then the possibility of the price hitting a new milestone is high. Moreover, the price could form new highs and range towards its annual closing target of $1.1043.

Else if the lawsuit has no impact, the typical buying and selling pressures would restrict the price below $0.8486. But, conversely, if the SEC further pushes the lawsuit or a decision comes against XRP then the altcoin would end up trading at $0.5850.

Factors like global recognition and growing adoption could propel XRP prices to greater heights. If this were to happen, the altcoin could propel to its annual high of $1.8157. In contrast, prolonged dominance of bears and ebbing volumes could drag the price down to $0.9564. Successively, considering the bullish and bearish targets, the regular price might find its base at $1.3511.

Ripple is expected to work with more European and Latin American banks who will further promote both XRP and Ripple’s payment technology. Such advances could lead to significant price changes in XRP. This can further draw investors and cause the XRP price to march towards the target of $3.0220.

However, if Ripple manages to carry over the persisting investors by maintaining a steady network. And remains to be an affordable exchange medium, then by the end of 2025, the price may be at an average figure of $2.2815.

The institutional support and partnerships will have a positive impact on Ripple along with its price perspective. According to Coinpedia’s formulated XRP Price Prediction, with such positive market sentiments. XRP price may get a considerable boost, and it may hit a maximum of $0.64 by the end of 2022.

On the downside, the Lawsuit may negatively impact the traders if the case sees another extension to the following year. If this happens, Ripple will lose a massive sector of its investors, and the price might drop to $0.46.

The proponent says XRP has posed a solid breakout from the lows, and that the price action has been showing support above the last target level 47C. He expects a strong finish to the week with a target at and above 55C.

$XRP fan's, solid breakout from the lows, price action showing support above last target level 47c. Expect a strong finish to the week with eyes on targets at and above 55c. Some adjustment to levels in this post from previous – 20/09. — Harry (@HaraldoXRP) October 1, 2022

Click here to read our in-depth price forecast for Polkadot for 2022 and the years to come!

XRP is a cryptocurrency following its launch in 2012. It serves its payment network, Ripple Net, and native asset. At launch, 100 B XRP tokens were pre-mined and distributed to individuals and companies. 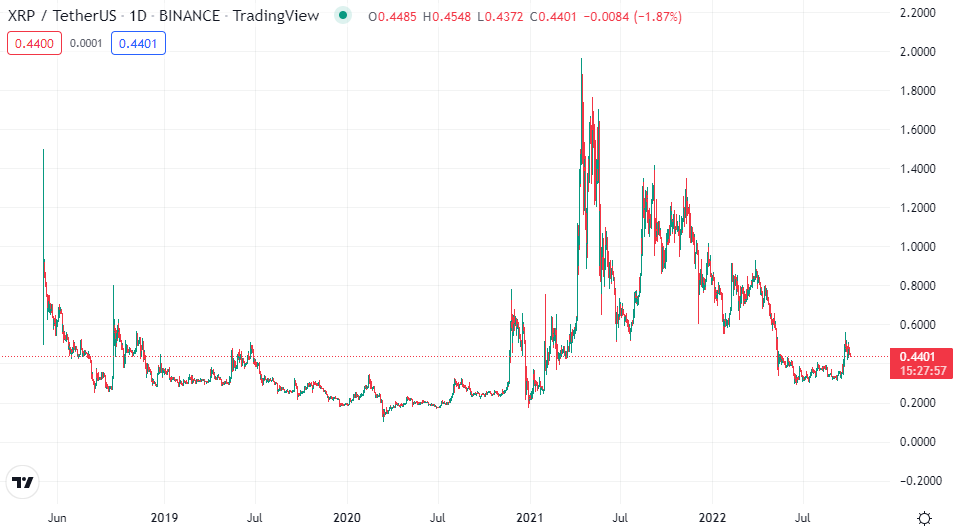 XRP might reach $0.6445 if it gets a clearance from the SEC’s lawsuit.

According to our Ripple price prediction, the price of XRP could reach the maximum trade value of $3.0220 by the end of 2025.