Cryptocurrencies are becoming more popular by the day. Adoption has increased significantly, particularly now that alternative payment solutions are available. When it comes to payments, Ripple has solidified its position by providing a safe platform for cross-border payments using XRP as a medium. However, the crypto has largely remained unaffected by these factors, as the Ripple vs SEC lawsuit has had a greater impact.

As a result, when the judgment is expected to be issued in the near future, will it provide the necessary boost to push the price above $1?

Let’s look at the detailed Ripple price prediction for 2022 to 2025 and try to figure out the answers to the questions above. 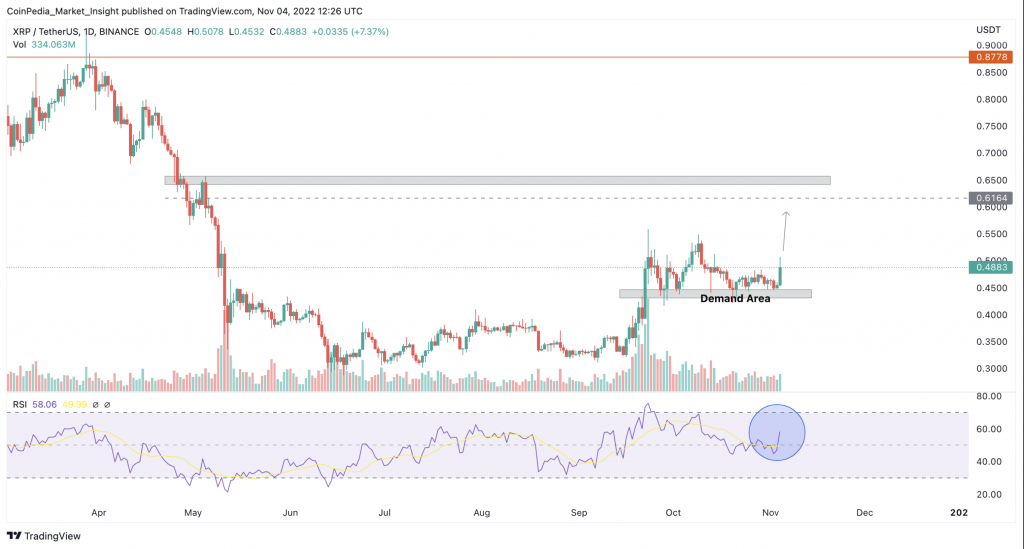 Ripple’s trading volume has been rather consistent off-late. The firm’s lawsuit with the U.S SEC has been witnessing constructive developments and is likely to find an outcome in its favor. Meanwhile, the XRP price continues to trade above the demand area, flashing the possibility of a notable surge. The bulls may try very hard to maintain a firm upswing throughout the month aiming to reach $0.6 at the earliest.

Therefore, With a positive outcome to the lawsuit, XRP’s price could propel to its potential high of $0.6445.On the contrary, if the lawsuit finds any other delay or motions, the price could close its trade at $0.4683 That said, usual buying and selling pressures would land the price at average levels of $0.5652.

The possibility of the Ripple vs SEC lawsuit being pushed to December or beyond emerges. In such a scenario, the XRPArmy may get a little furious which may inversely impact the price. Hence one can expect the resurgence of the bearish trend for a while which may trigger a significant upswing if the price reaches the required support levels.

With a normal trade, the XRP price may hover between $0.7 to $0.95 by the end of the year 2022. Meanwhile, if the judgement is produced in favour of the company, the XRP price is expected to kick-start a notable upswing above $1 and may reach $1.2 levels. Meanwhile, if the bears intensified their activity, the Ripple price may remain consolidated between $0.98 to $1.05 by the year-end.

By the end of 2023, if the series of events occur as predicted. Then the possibility of the price hitting a new milestone is high. Moreover, the price could form new highs and range towards its annual closing target of $1.1043.

Else if the lawsuit has no impact, the typical buying and selling pressures would restrict the price below $0.8486. But, conversely, if the SEC further pushes the lawsuit or a decision comes against XRP then the altcoin would end up trading at $0.5850.

Factors like global recognition and growing adoption could propel XRP prices to greater heights. If this were to happen, the altcoin could propel to its annual high of $1.8157. In contrast, prolonged dominance of bears and ebbing volumes could drag the price down to $0.9564. Successively, considering the bullish and bearish targets, the regular price might find its base at $1.3511.

Ripple is expected to work with more European and Latin American banks who will further promote both XRP and Ripple’s payment technology. Such advances could lead to significant price changes in XRP. This can further draw investors and cause the XRP price to march towards the target of $3.0220.

However, if Ripple manages to carry over the persisting investors by maintaining a steady network. And remains to be an affordable exchange medium, then by the end of 2025, the price may be at an average figure of $2.2815.

The institutional support and partnerships will have a positive impact on Ripple along with its price perspective. According to Coinpedia’s formulated XRP Price Prediction, with such positive market sentiments. XRP price may get a considerable boost, and it may hit a maximum of $0.64 by the end of 2022.

On the downside, the Lawsuit may negatively impact the traders if the case sees another extension to the following year. If this happens, Ripple will lose a massive sector of its investors, and the price might drop to $0.46.

The proponent says XRP has posed a solid breakout from the lows, and that the price action has been showing support above the last target level 47C. He expects a strong finish to the week with a target at and above 55C.

$XRP fan's, solid breakout from the lows, price action showing support above last target level 47c. Expect a strong finish to the week with eyes on targets at and above 55c. Some adjustment to levels in this post from previous – 20/09. — Harry (@HaraldoXRP) October 1, 2022

XRP is a cryptocurrency that launched in 2012. It serves its payment network, Ripple Net, and native asset. At launch, 100 B XRP tokens were pre-mined and distributed to individuals and companies.

XRP might reach $0.6445 if it gets a clearance from the SEC’s lawsuit.

According to our Ripple price prediction, the price of XRP could reach the maximum trade value of $3.0220 by the end of 2025.

XRP Price Evinces as the Strongest Movers! This May Be When it May Reach $1!

XRP Price May Reach These Levels in December 2022!