XRP price surprised with its magnificent moves in the past couple of days, gaining more than 62% since the beginning of the week. The main reason behind the rise is assumed to be the comments of the Ripple CEO, Brad Gardlinghouse who believes the settlement may be around the corner. The liquidity poured into the asset due to which the price inflated by more than 60%, outperforming Bitcoin & Ethereum.

Despite the ongoing lawsuit against SEC, Ripple continued to expand as it has invested nearly $500 million in more than 60 companies within the crypto space. Additionally, the coiling market sentiments with a belief of closure to the case have also paved the way for a gigantic rise of the XRP price.

With the surge, the asset has successfully pierced through the multi-year descending trend line and flashing hug bullish signals of a 2x or 3x rally soon.

Therefore, the XRP price surged high to hit the ATH at $3.84 from the levels around $0.01. Now when the price is hovering around $0.5, the analyst believes the asset may go parabolic for the next 9 months and mark a new ATH.

Did the Short-Squeeze Play Well for XRP Price?

The XRP price rose magnificently after a prolonged consolidation below $0.45 for more than 3 months. While the XRParmy appeared a little annoyed with the sideway trend of the asset, a clear possibility of a short squeeze came out of the blue.

A similar attempt was carried out on Celcius Network where the CEL price rose more than 200% following a short-squeeze. Therefore, if the measured impact will have the same repercussion, the XRP price may be due for a monstrous rally to reach $1.65 in the next 6 to 8 months. 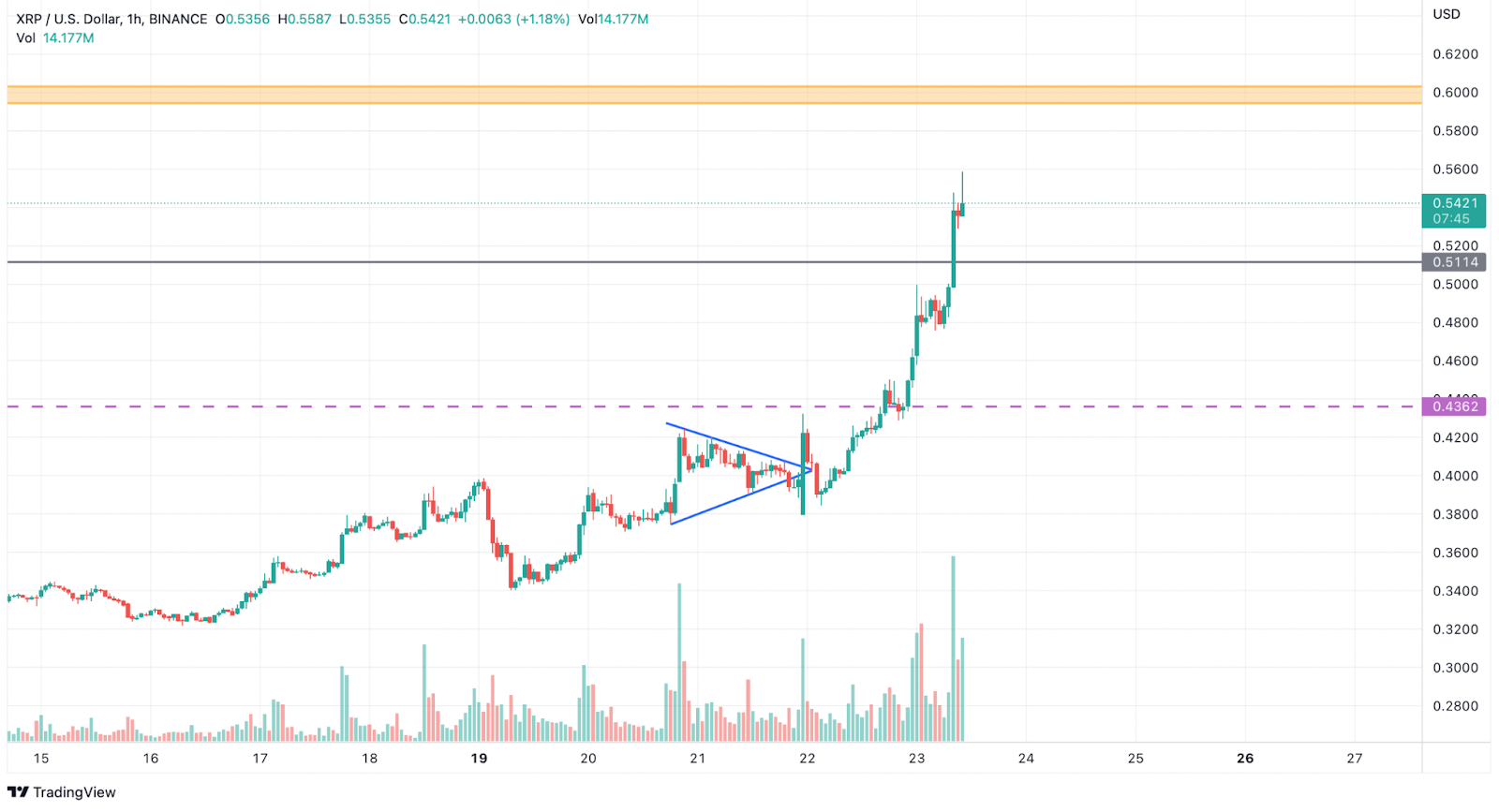 The XRP price ignited a strong upswing immediately after breaking out from the symmetrical triangle. On reaching the immediate resistance at $0.4362, the price began to stumble slightly, which may be due to a rise in XRP short bets. However, the asset consolidated for a while and quickly rose high following a huge influx of buying volume that thrashed the shorts.

Further, the XRP price continued to form bullish flags and raised high maintaining a firm upswing, without leaving any room for the bears to swell. Collectively, the positive comments from the Ripple CEO on the ongoing Ripple vs SEC lawsuit turned out to be a blessing in disguise for the asset. Hence, the price is expected to continue to thrive in the coming days until it reaches $1.

XRP Army Back in Action, Will Ripple Price Gain the Required Momentum to Reach $1?