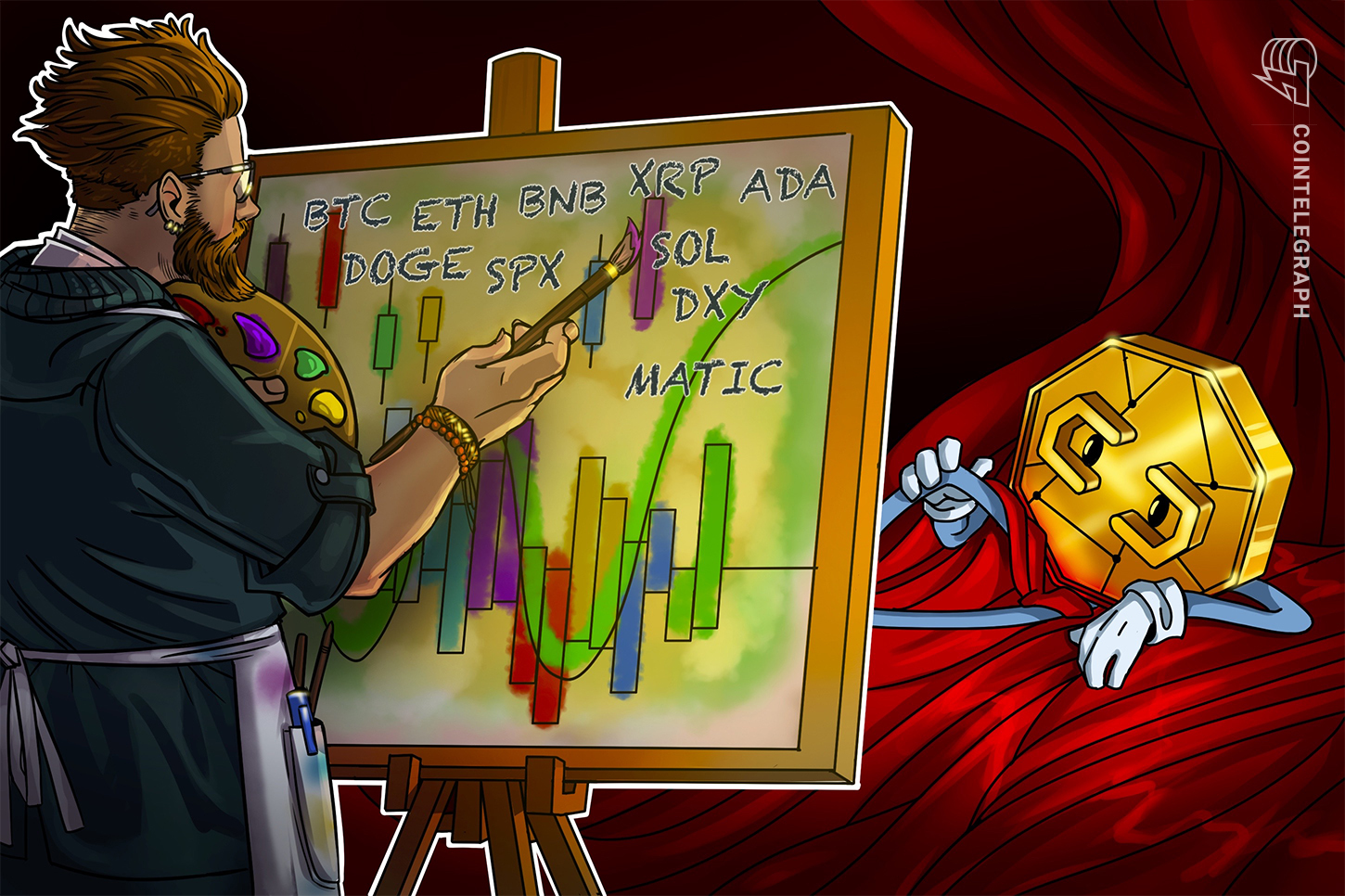 The United States consumer price index (CPI) increased 8.2% annually in September, beating economists’ expectations of an 8.1% rise. The CPI print lived up to its hype and caused a sharp, but short-term increase in volatile risk assets. 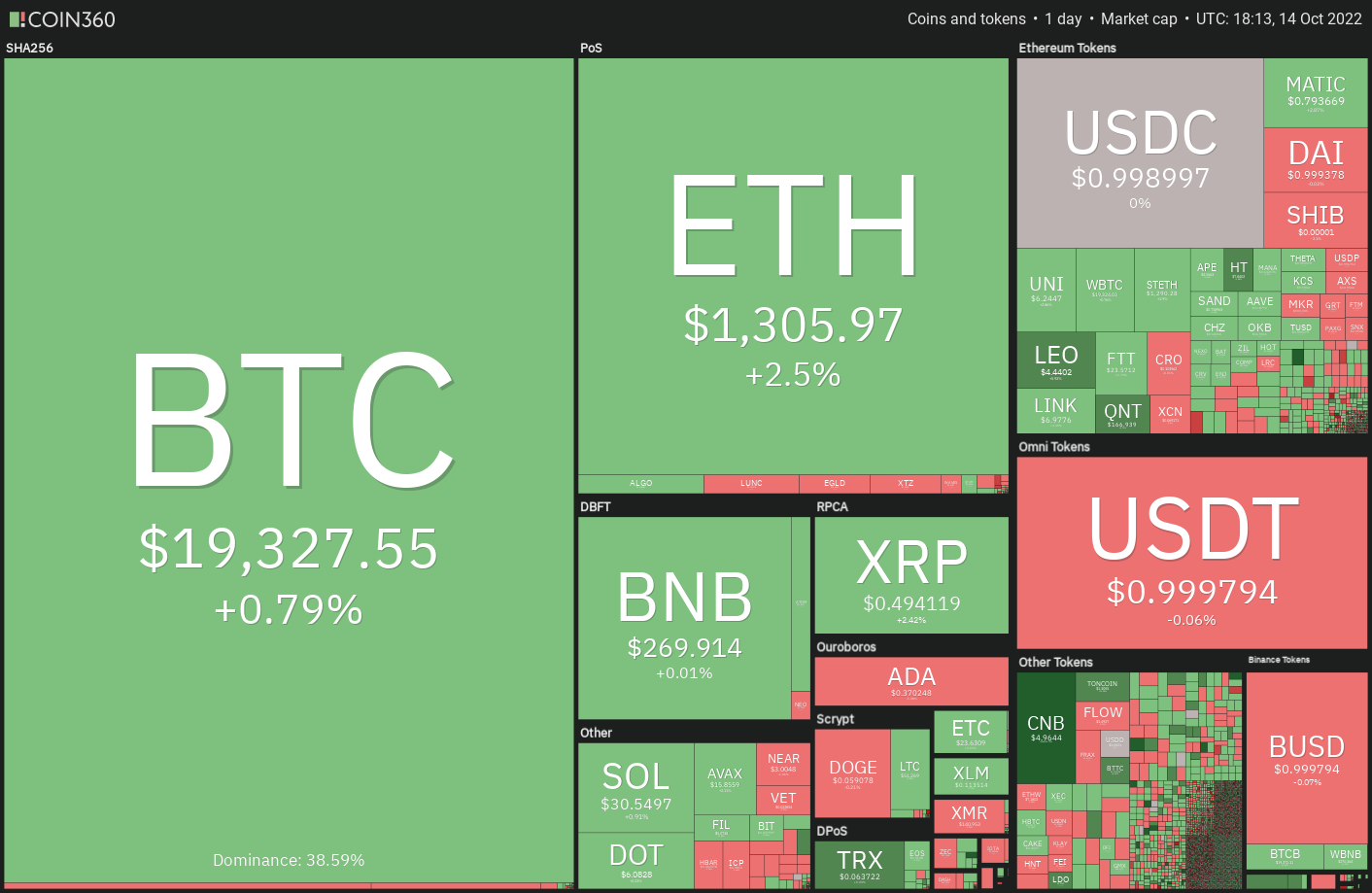 Both the U.S. equities markets and Bitcoin tried to extend their recovery on Oct. 14 but the higher levels attracted selling, indicating that the bears have not yet given up.

Could the increased volatility culminate with a breakout to the upside or will it start the next leg of the downtrend?

Let’s study the charts of the S&P 500 index, the U.S. dollar index (DXY) and the major cryptocurrencies to find out.

The S&P 500 index (SPX) gapped down on Oct. 13 and dropped to 3,491 but lower levels attracted huge buying by the bulls. That may have caught several aggressive bears on the wrong hoof and they might have scrambled to cover their short positions. That propelled the index back above the breakdown level of 3,636. 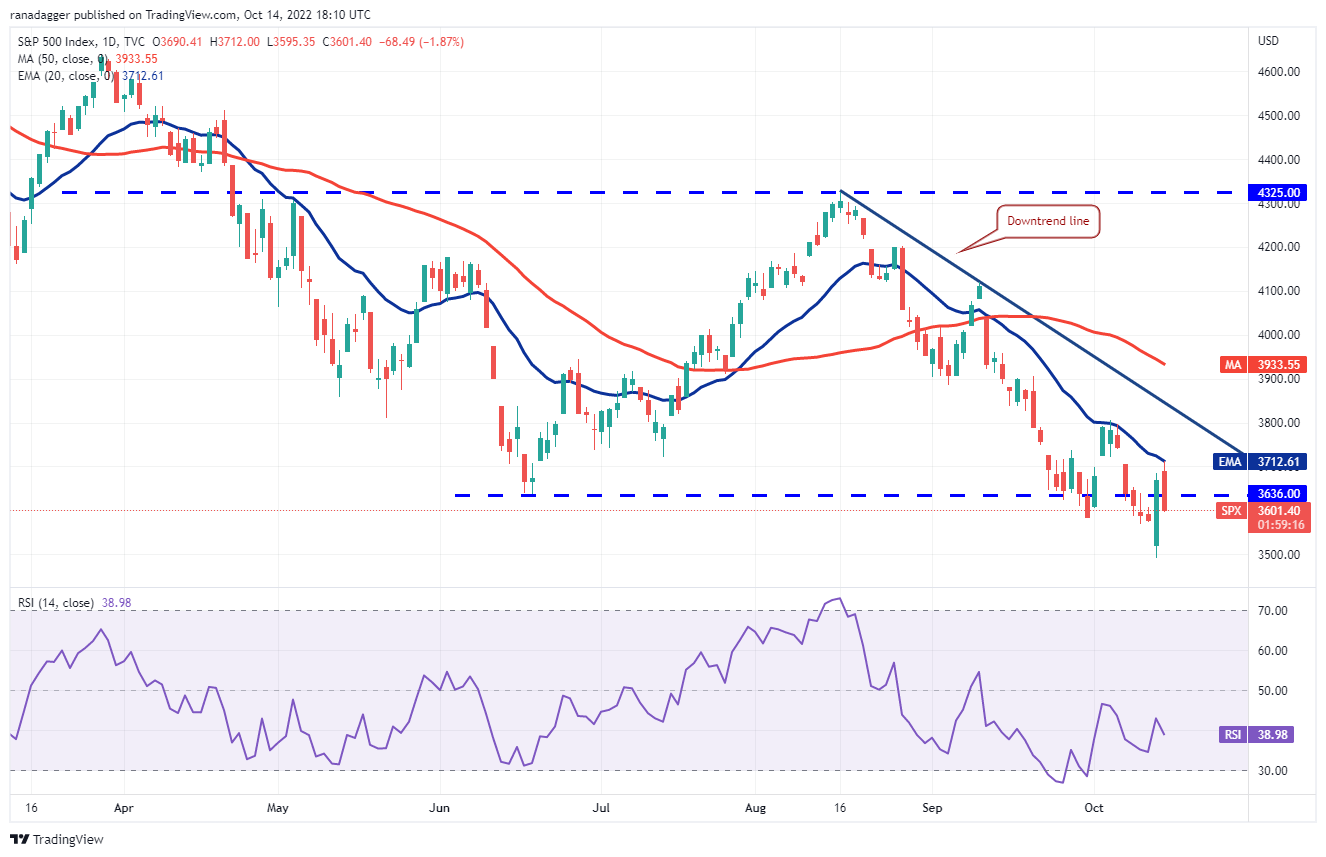 Buyers tried to extend the recovery on Oct. 14, but the bears had other plans. The sellers vigorously defended the 20-day exponential moving average (3,715), indicating that the sentiment remains negative and relief rallies are being sold into.

The bears will try to sink the index to 3,491 which is an important level to keep an eye on. If this support cracks, the index could dive to 3,325.

Alternatively, if the index rebounds off the support zone between 3,636 and 3,491, it will suggest that bulls may be accumulating on dips. Buyers will then attempt to overcome the barrier at the 20-day EMA and challenge the downtrend line. If this resistance collapses, it will signal that the corrective phase may be over.

The U.S. dollar index turned down from 113.92 on Oct. 13 but the bulls arrested the decline at the 20-day EMA (112). This suggests that the sentiment remains positive and traders are viewing the dips as a buying opportunity. 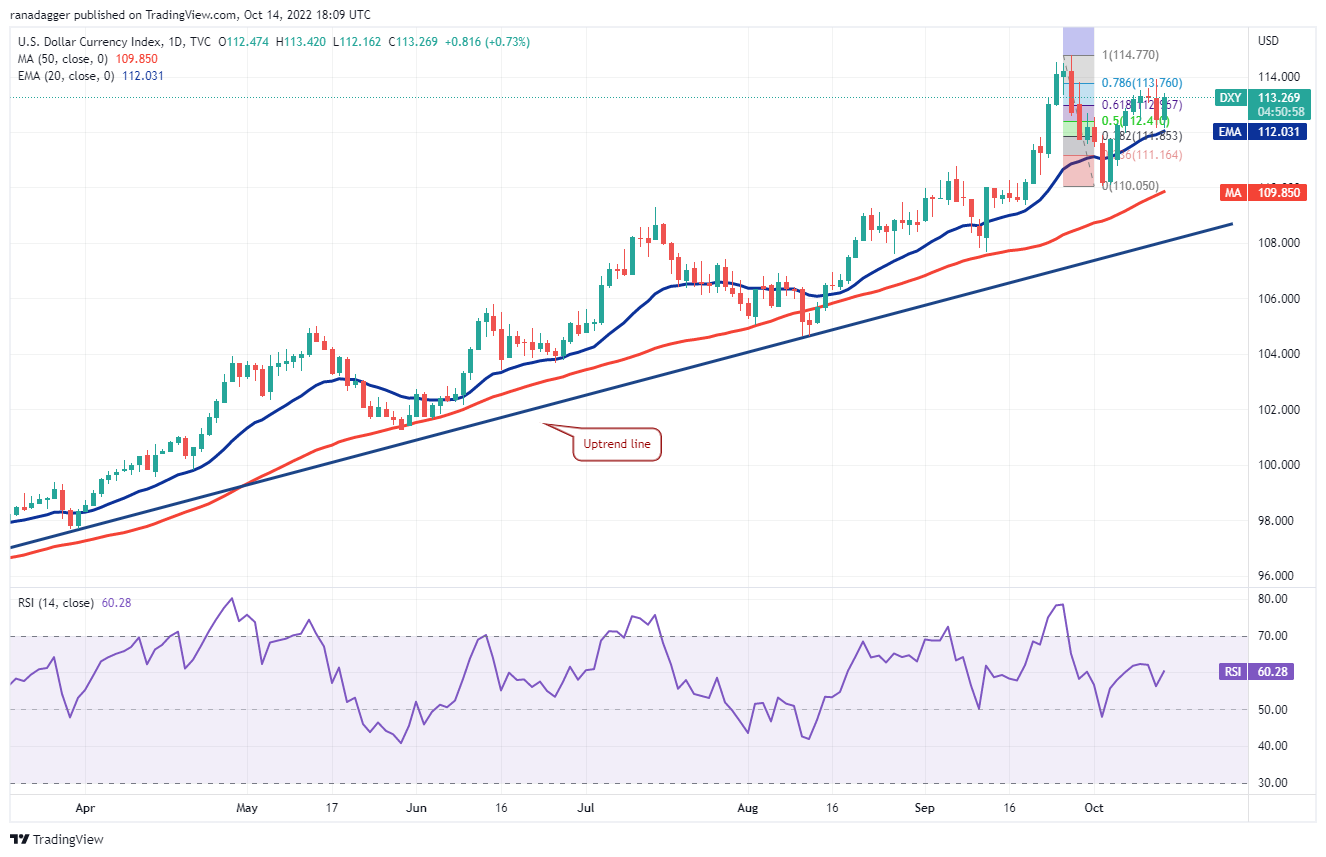 The bulls will try to pierce the overhead resistance zone between 113.92 and 114.77. An acceptance above this zone will signal the resumption of the uptrend. The index could then rally to 117.14.

Contrary to this assumption, if the price turns down from the overhead resistance, the bears will try to pull the index below the 20-day EMA. A break below this support will be the first indication that the bullish momentum is weakening.

The index could then decline to the 50-day simple moving average (109). A trend change will be signaled if bears sink the price below the uptrend line.

Bitcoin sliced through the support at $18,843 on Oct. 13 and dipped close to $18,125. This level attracted buying which started a sharp recovery as seen from the long tail on the day’s candlestick. 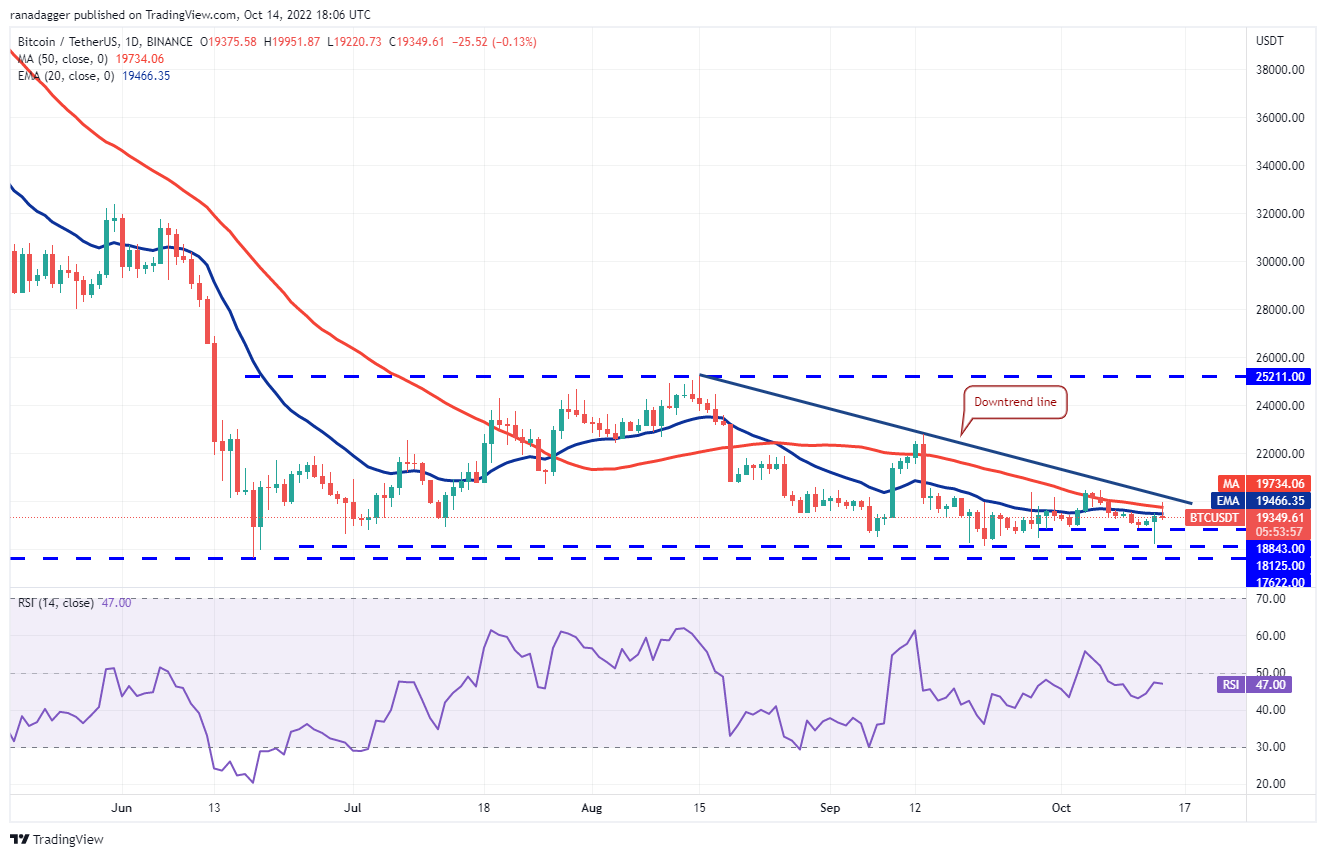 Buyers pushed the price above the moving averages on Oct. 14 but the up-move is facing stiff resistance at the downtrend line. The 20-day EMA ($19,466) is flattening out and the relative strength index (RSI) is near the midpoint, indicating equilibrium between buyers and sellers.

This balance will tilt in favor of the bulls if they push and sustain the price above the overhead resistance at $20,500. The BTC/USDT pair could then rally to $22,800. The bears are expected to mount a stiff resistance at this level.

Ether (ETH) broke below the support at $1,220 on Oct. 13 but the bears could not keep the price down. The bulls vigorously purchased the dip, forming a hammer candlestick pattern. 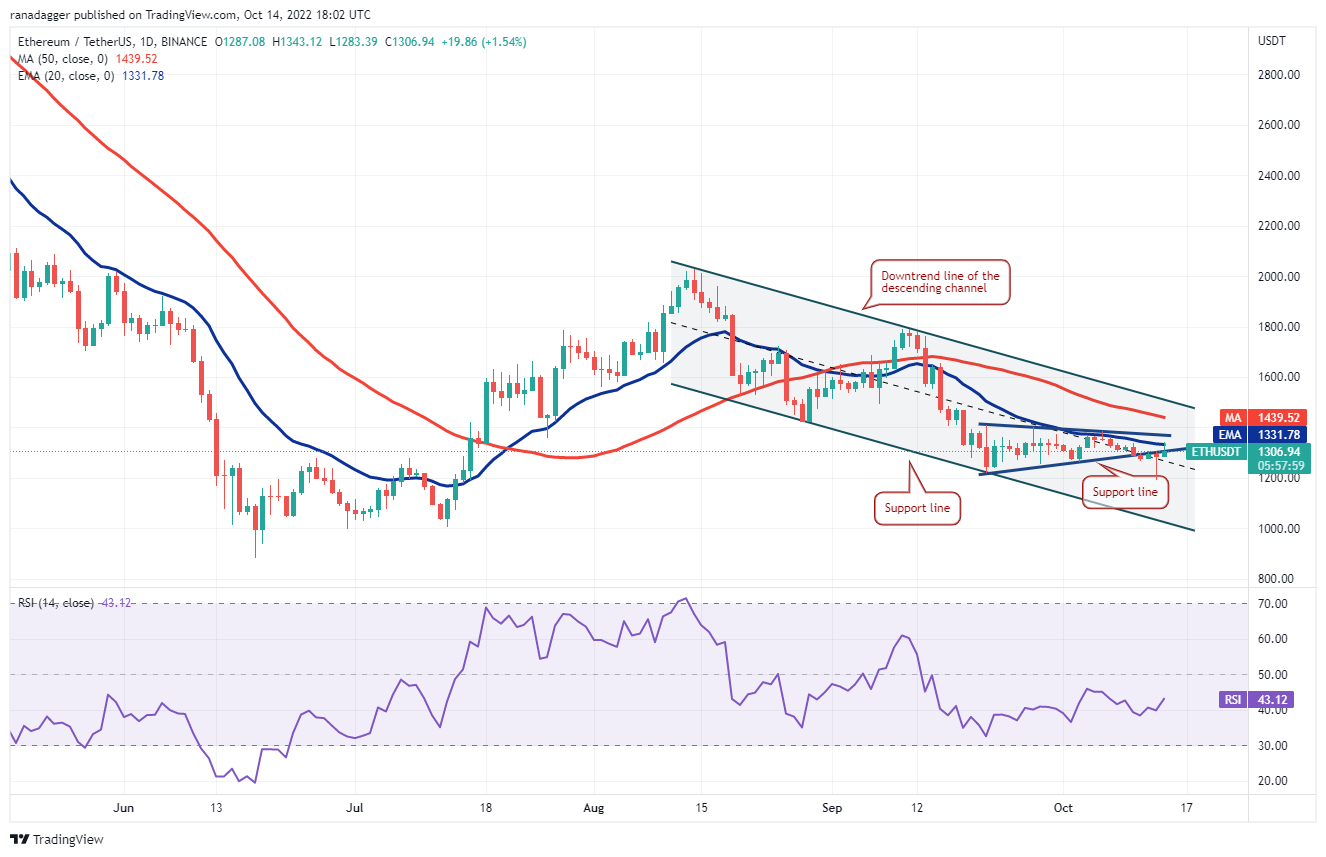 Buyers have sustained the positive momentum on Oct. 14 and are trying to push the price above the overhead zone between the 20-day EMA ($1,331) and the resistance line of the triangle.

If they can pull it off, the ETH/USDT pair could attempt a rally to the downtrend line of the descending channel pattern. The bulls will have to clear this obstacle to signal a potential trend change.

The bears are likely to have other plans. They will attempt to halt the recovery in the overhead zone and then try to pull the pair below $1,190.

BNB (BNB) has been range-bound between $300 and $258 for the past several days. In a range, traders usually buy near the support and sell close to the resistance. 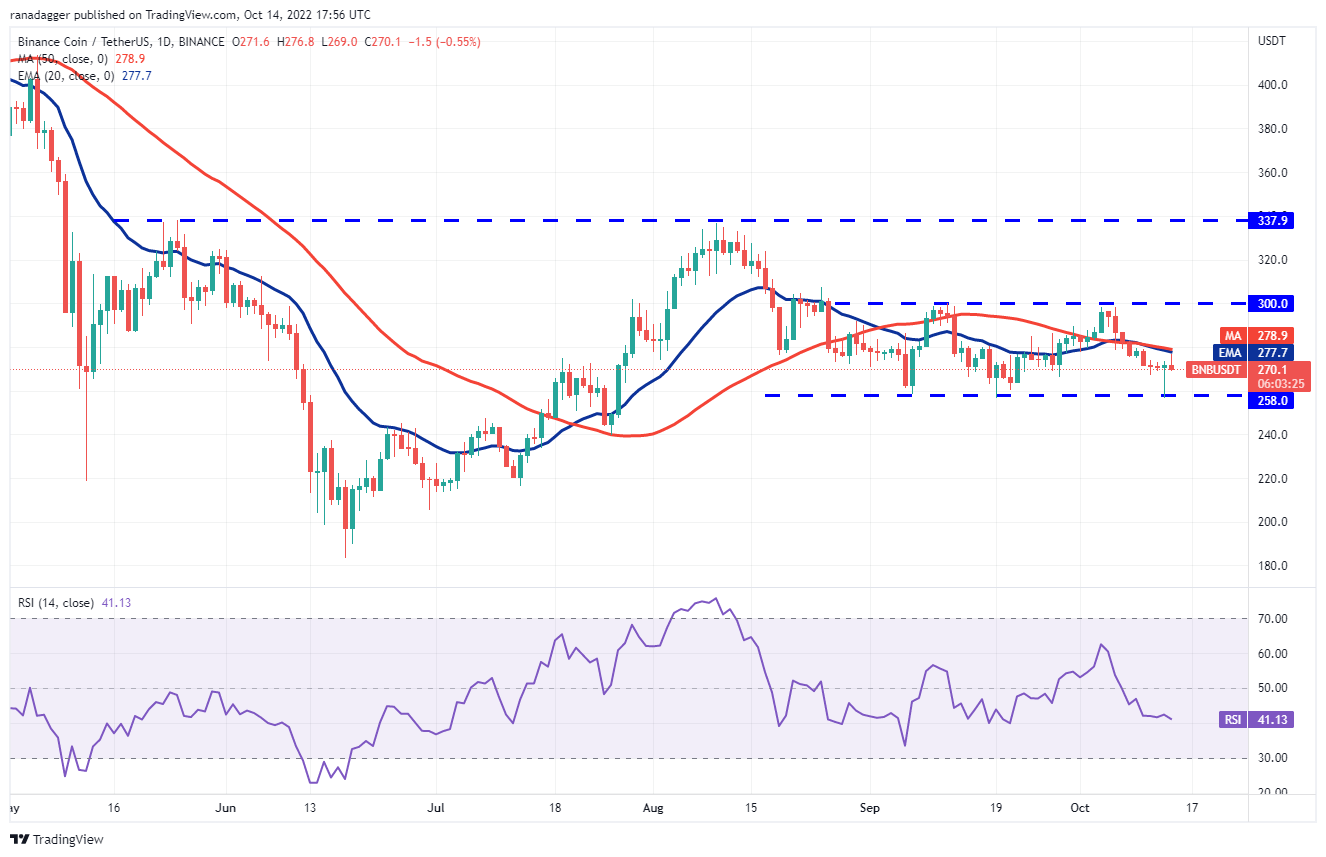 That is what happened on Oct. 13 as the bulls purchased the dip to $258. Buyers tried to push the price above the moving averages on Oct. 14 but the long wick on the candlestick shows that bears are selling near resistance levels. The bears will again try to pull the price below $258 and extend the decline to $216.

On the contrary, if the price turns up and breaks above the moving averages, the BNB/USDT pair could attempt a rally to the overhead resistance at $300. A break above this level could set the stage for a rally to $338.

XRP (XRP) broke below the 20-day EMA ($0.47) on Oct. 13 but the bears could not sustain the lower levels. The bulls purchased the dip and pushed the price back above the 20-day EMA. 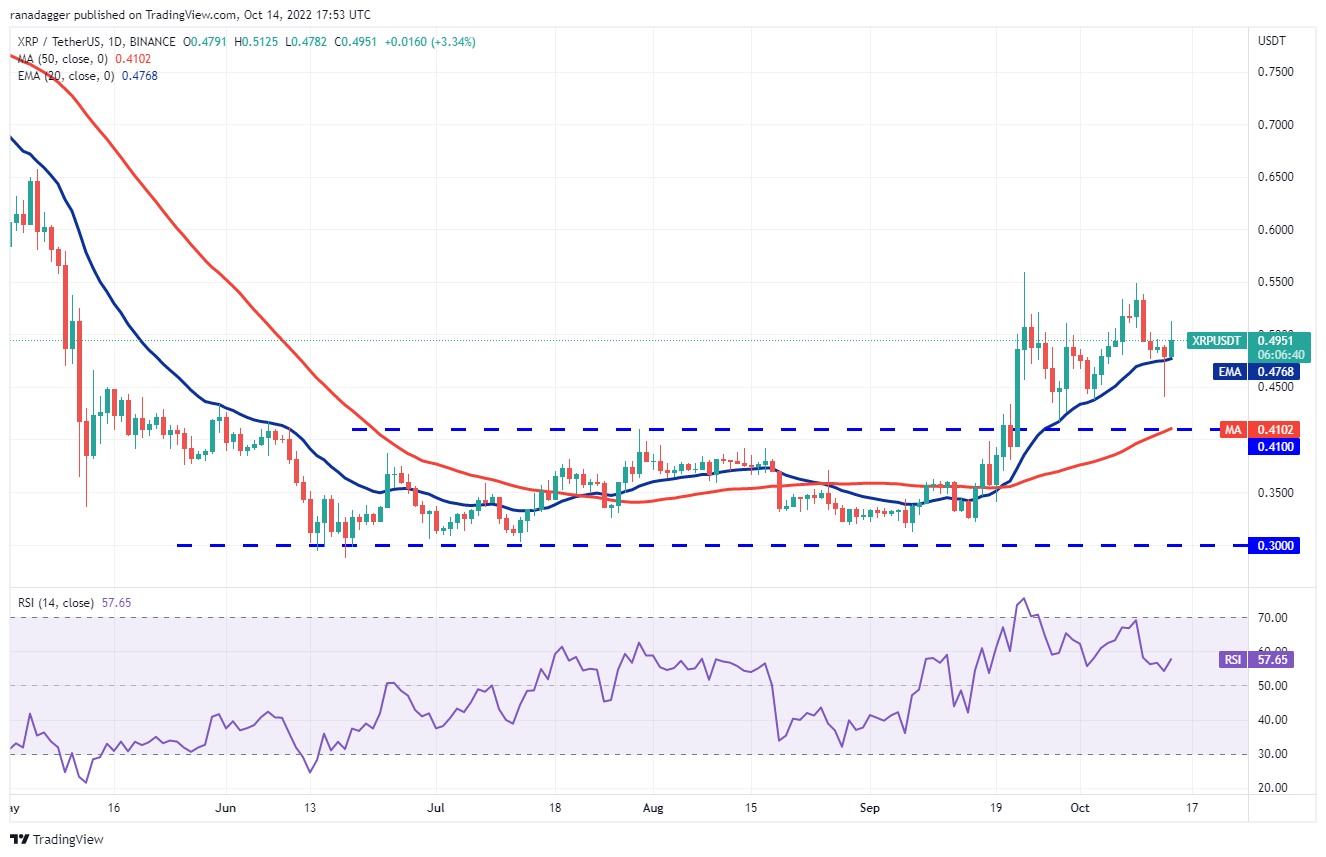 The first sign of weakness will be a break and close below the 20-day EMA. That would indicate that traders may be booking profits at higher levels. The pair could then slide to the breakout level of $0.41. 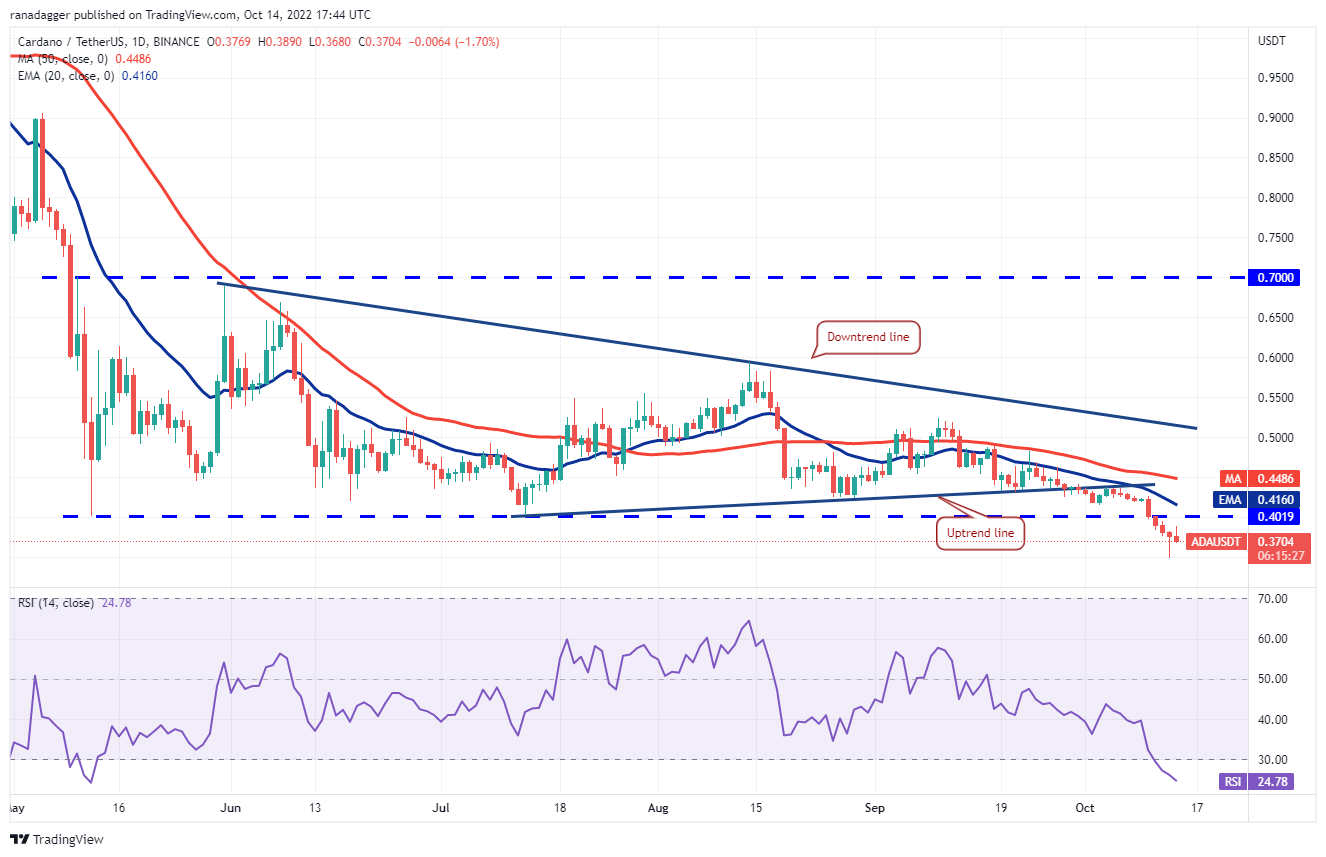 The 20-day EMA ($0.41) continues to slope down and the RSI is in the oversold territory, indicating that bears are in control. If the price continues lower and breaks below $0.35, it will suggest that bears have flipped $0.40 into resistance. That could increase the likelihood of a drop to $0.33.

This bearish view could be negated in the near term if buyers push the price above the moving averages. That will indicate strong accumulation at lower levels. The ADA/USDT pair could then climb to the downtrend line.

Solana (SOL) plunged below the $30 support on Oct. 13 but the bears could not build upon this strength and sink the price to the vital support at $26. The bulls arrested the drop at $27.87 and pushed the price back above $30. 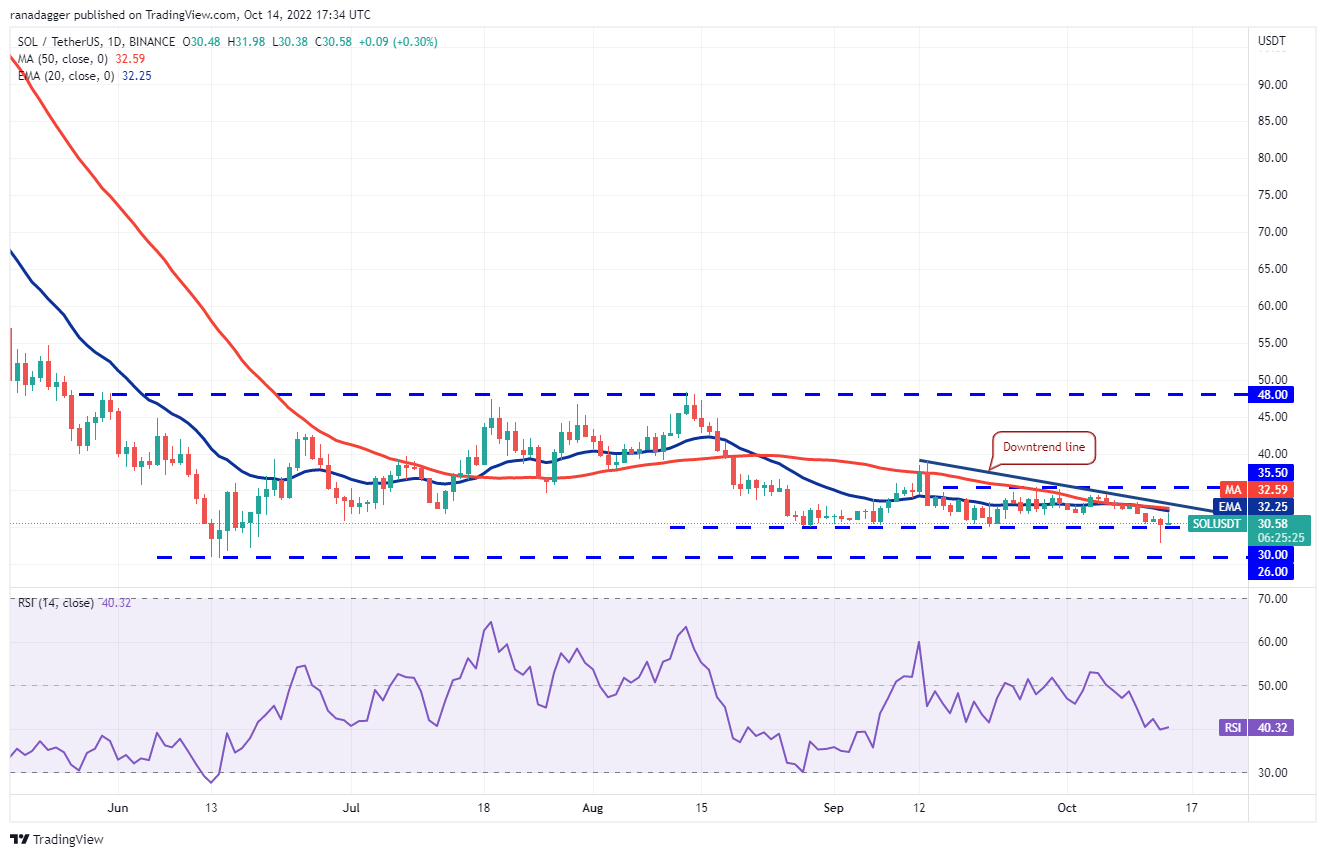 Buyers tried to extend the positive momentum on Oct. 14 but ran into heavy selling near the downtrend line as seen from the long wick on the candlestick. The bears will now again try to pull the price below $30 and extend the decline to $26.

If bulls want to invalidate this bearish view, they will have to quickly push the SOL/USDT pair above the downtrend line. That could clear the path for a possible rally to $35.50 and thereafter to $39 where the bears may again offer a strong resistance.

Dogecoin (DOGE) rebounded off the strong support near $0.06 on Oct. 13, indicating that the bulls are defending the level aggressively. Buyers are trying to propel the price above the moving averages on Oct. 14. 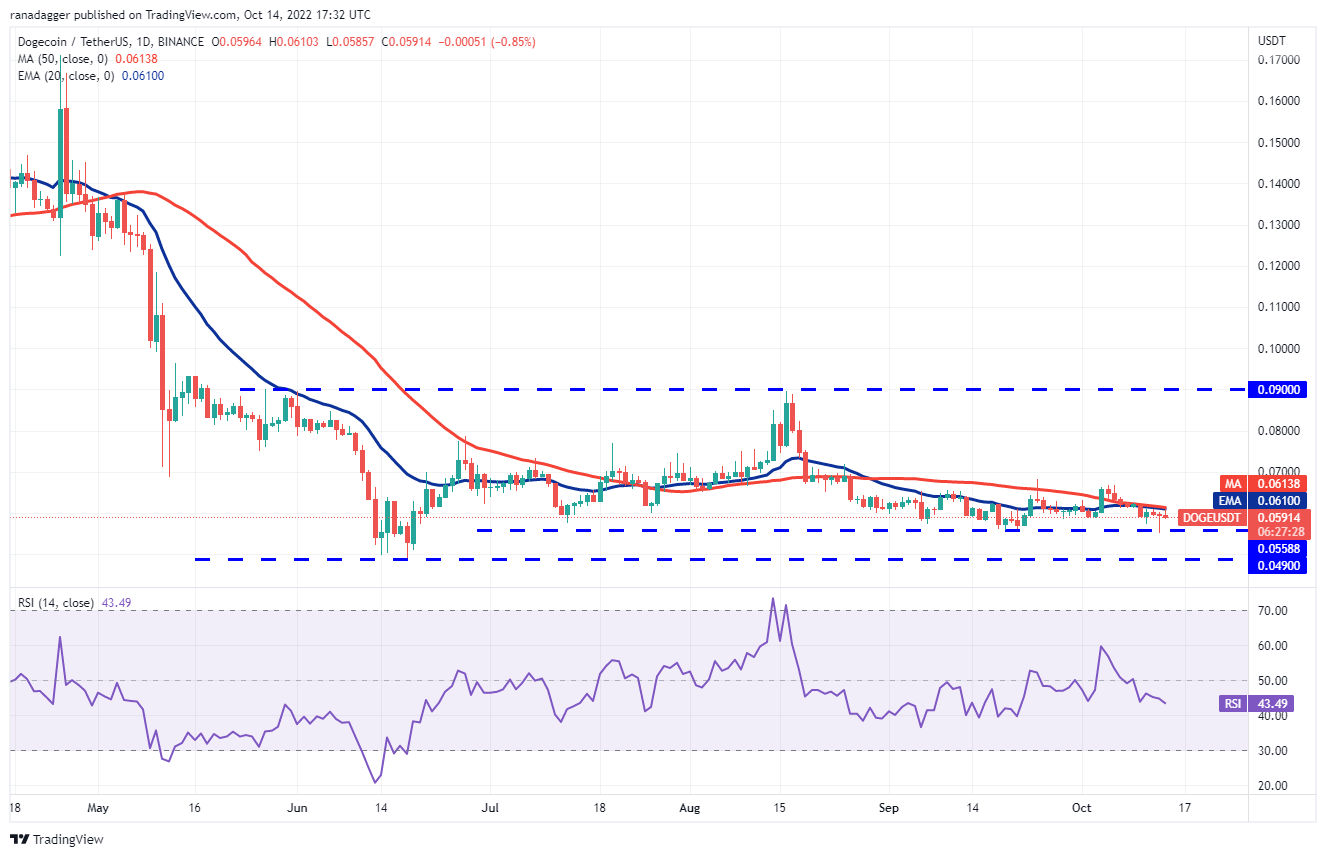 If they manage to do that, the DOGE/USDT pair could rise to $0.07. This level is again likely to act as a strong resistance but if bulls push the price above it, the pair could attempt a rally to the overhead level of $0.09.

Contrarily, if the price turns down from the moving averages, the bears will again attempt to sink the price below the support near $0.06. This is an important level for the bulls to defend because if it cracks, the pair could retest the June low near $0.05.

The long tail on Polygon’s (MATIC) Oct. 13 candlestick shows that bulls are aggressively buying near the $0.71 to $0.69 support zone. Buyers continued their momentum on Oct. 14 and tried to push the price above the downtrend line but the bears held their ground. 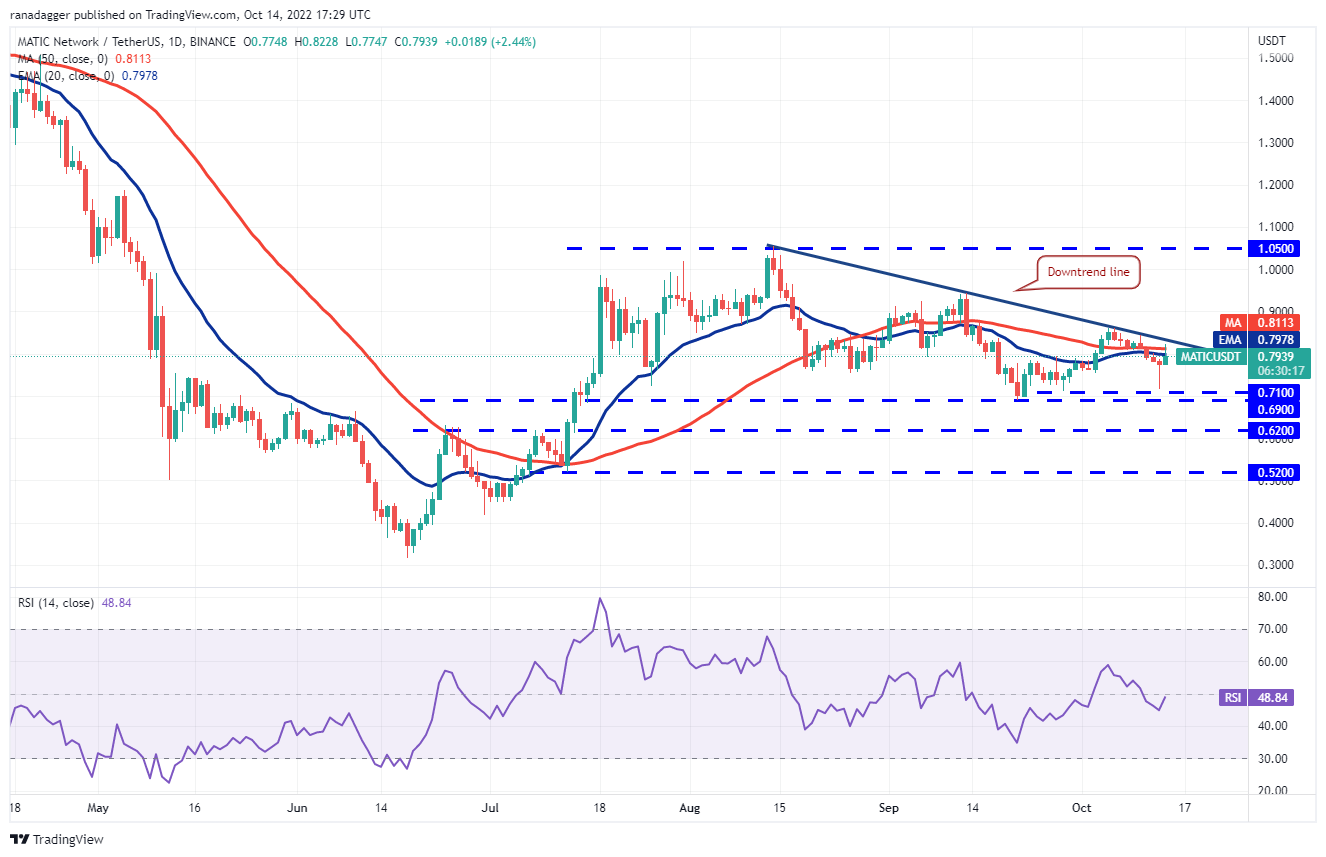 The flattish moving averages and the RSI near the midpoint suggest a balance between supply and demand. This equilibrium could tilt in favor of the buyers if the price rises above the downtrend line. The MATIC/USDT pair could then rise to $0.86 and if this level is crossed, the next stop could be $0.94.

On the other hand, if the price reverses direction from the downtrend line, it will show that bears continue to sell on rallies. The pair could then remain stuck between the downtrend line and the support at $0.69. 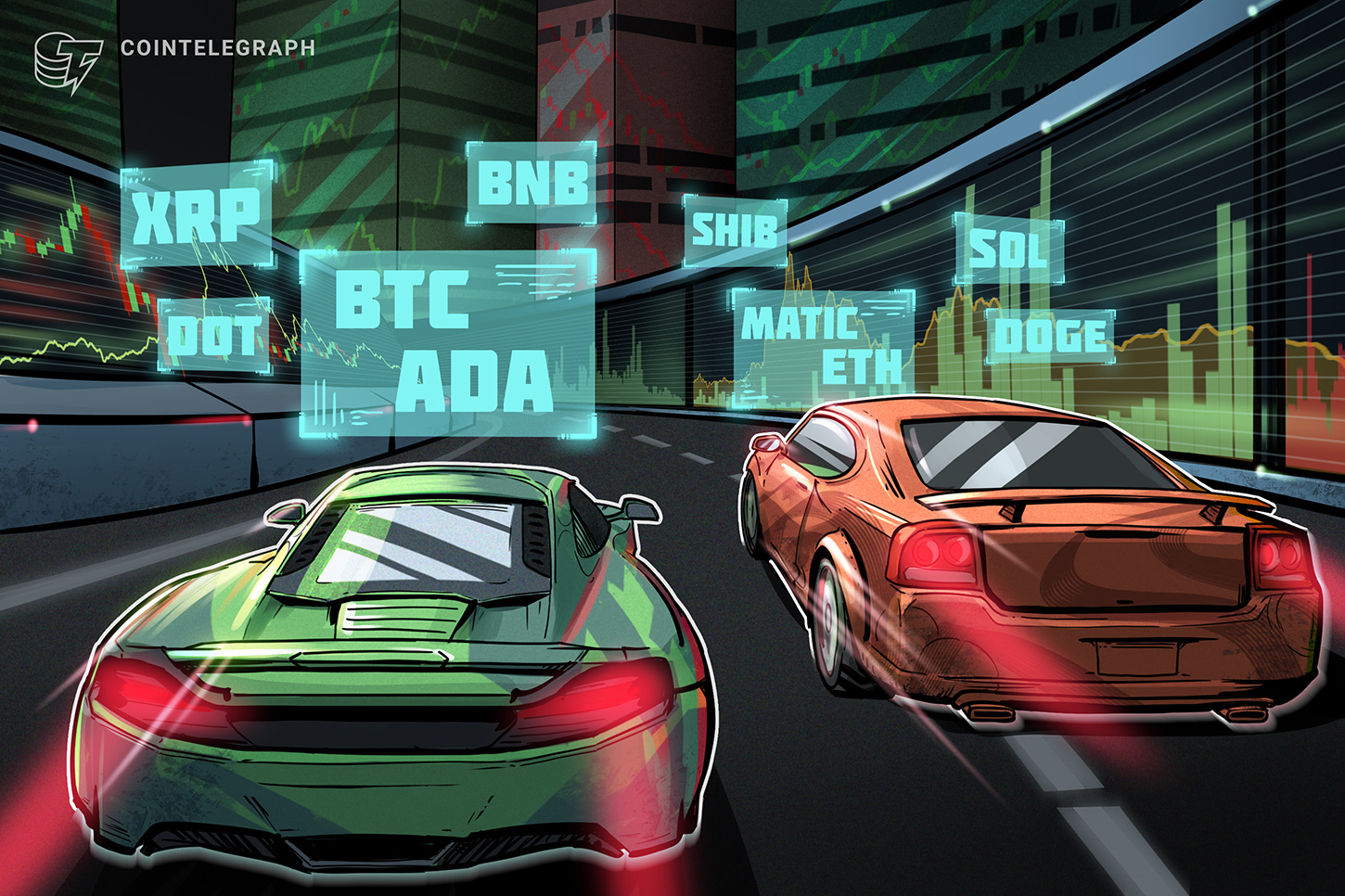 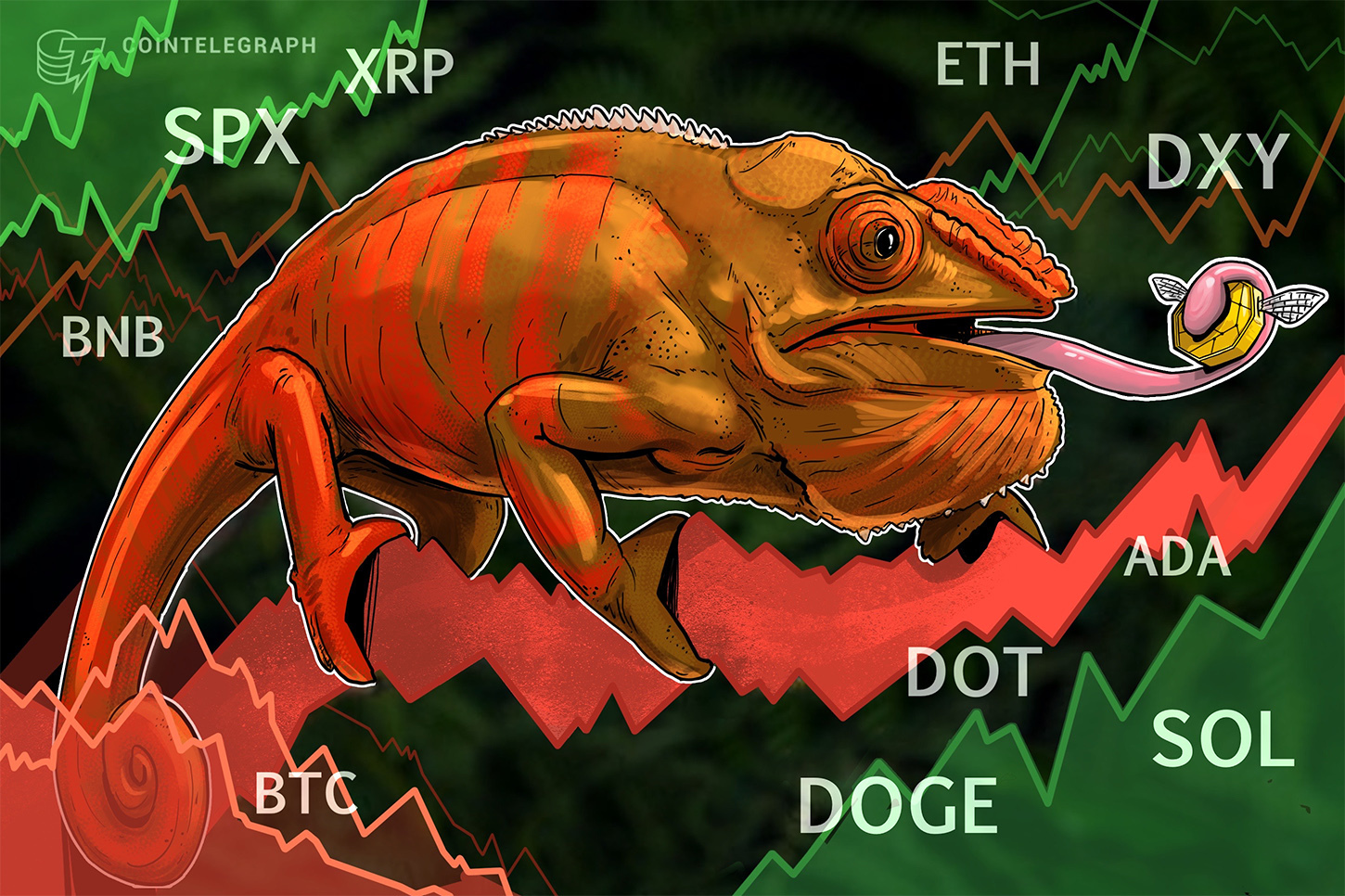 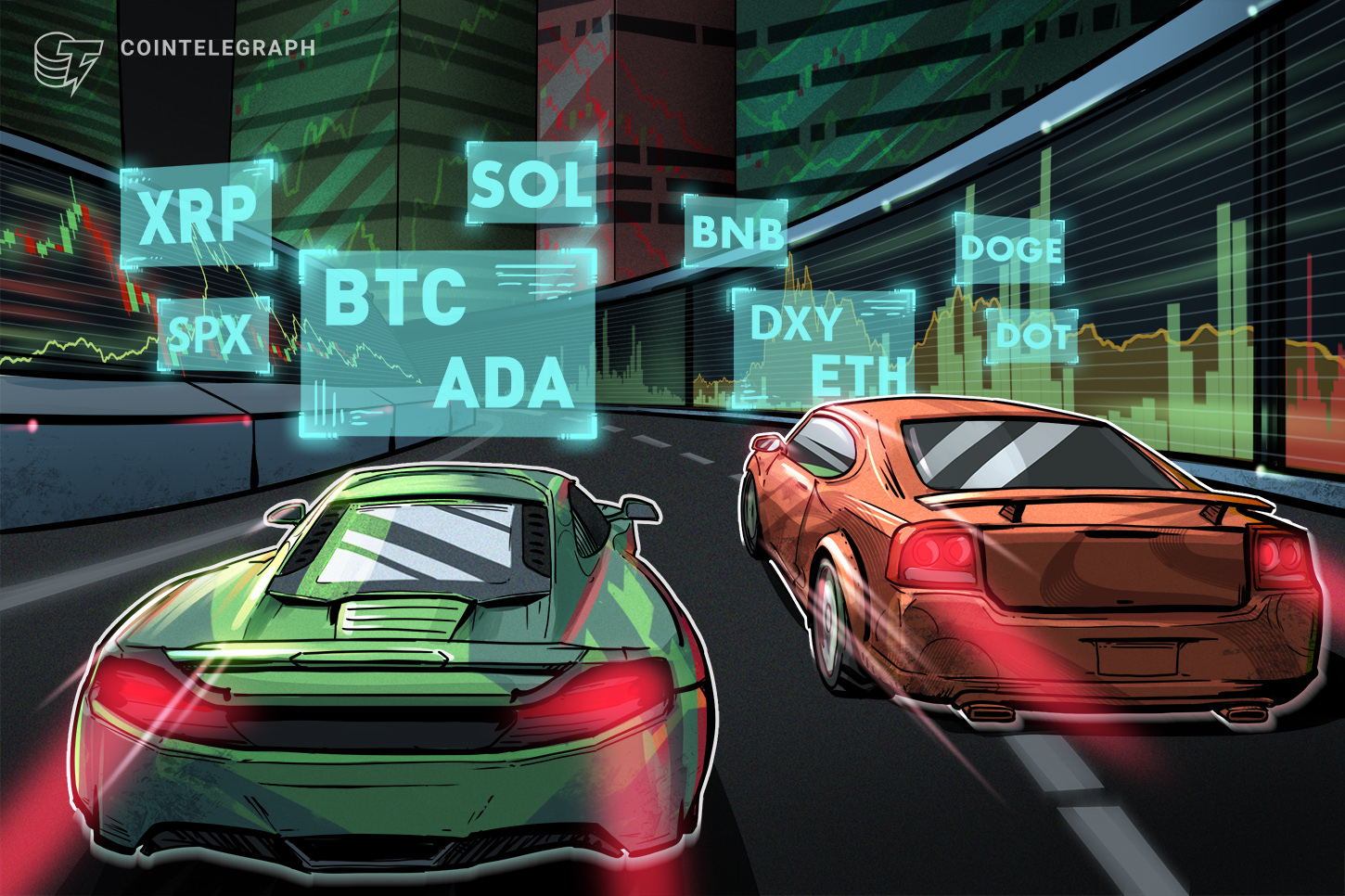