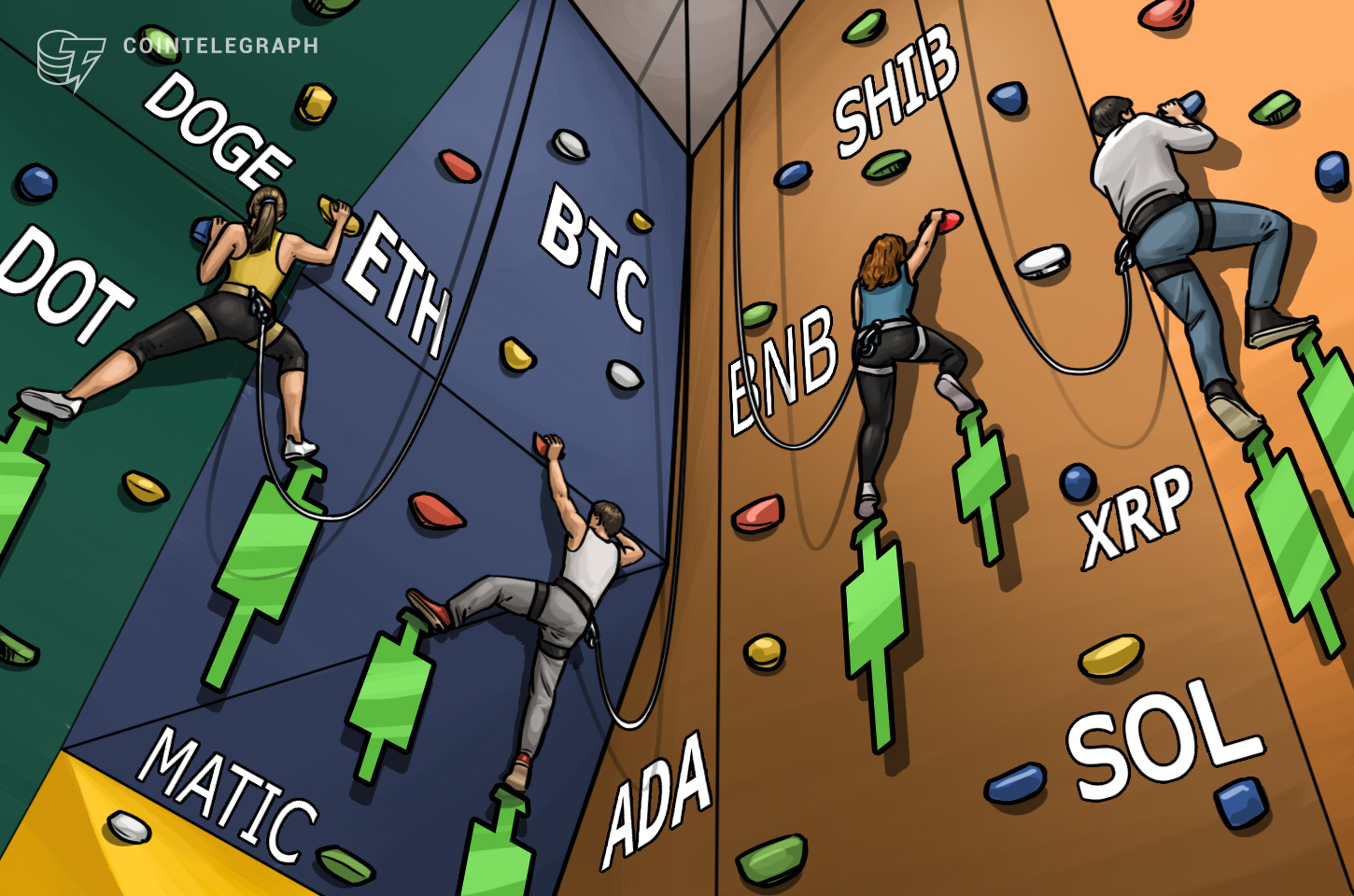 The lack of a decisive catalyst and the strength in the United States dollar index (DXY) has kept the recovery of risky assets under check. Bitcoin (BTC) remains stuck inside a tight range, searching for that elusive breakout. The longer the time Bitcoin spends inside the range, the greater will be the eventual breakout from it. 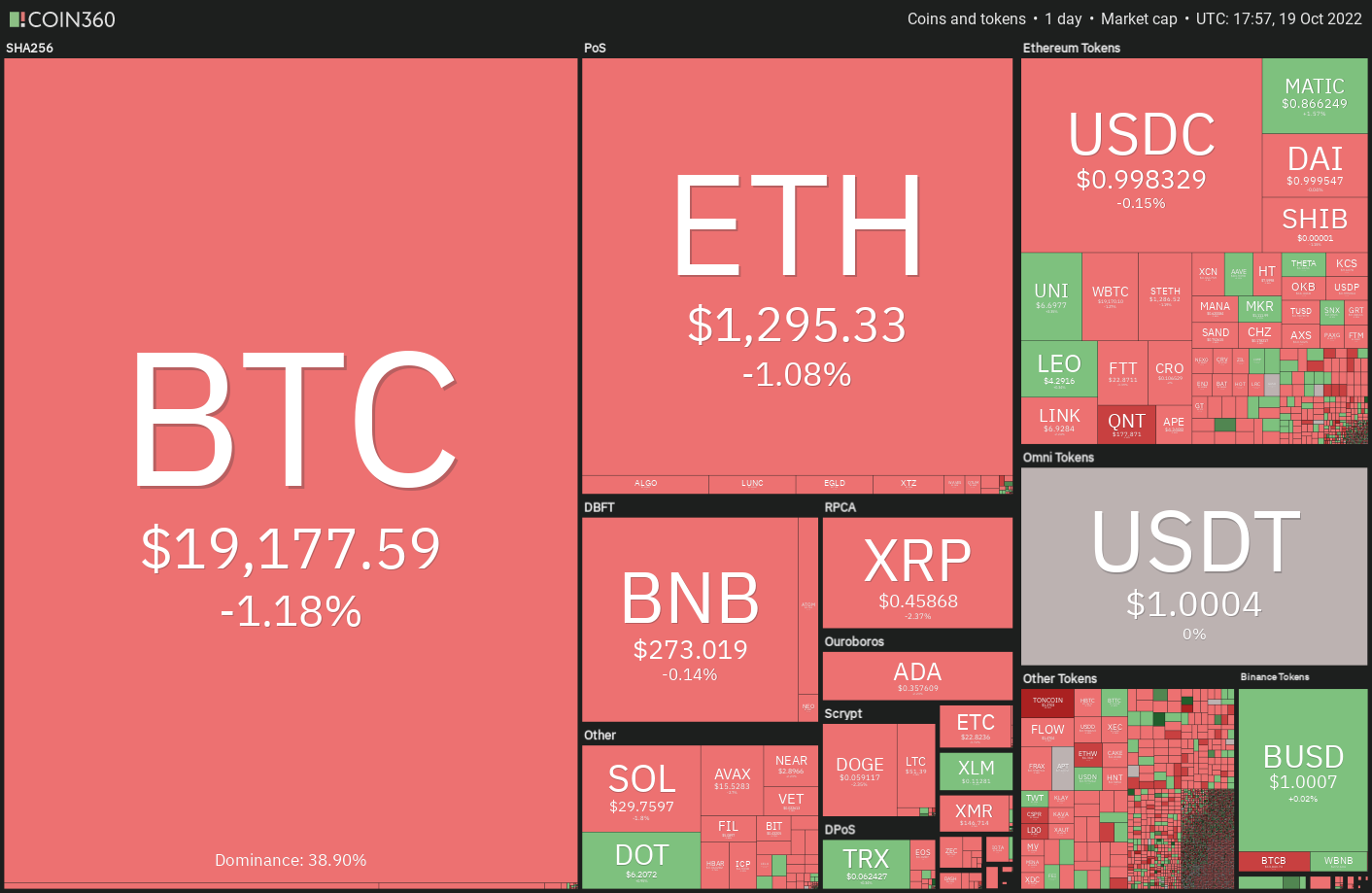 Although some believe that institutions have been slow to move into crypto, Coinbase senior adviser John D’Agostino thinks otherwise. While speaking in an interview with SALT, D’Agostino said that “institutional inertia is a very real thing” but in the case of digital assets, institutional adoption has been “moving very, very fast.”

What are the important support levels the bulls need to defend to avoid a collapse in Bitcoin and select altcoins? Let’s study the charts of the top-10 cryptocurrencies to find out.

The bears successfully defended the 50-day simple moving average ($19,659) on Oct. 17 and 18. The failure to clear this hurdle may have tempted the aggressive bulls to book profits and the bears to initiate short positions. That pulled the price back below the 20-day exponential moving average ($19,384) on Oct. 18. 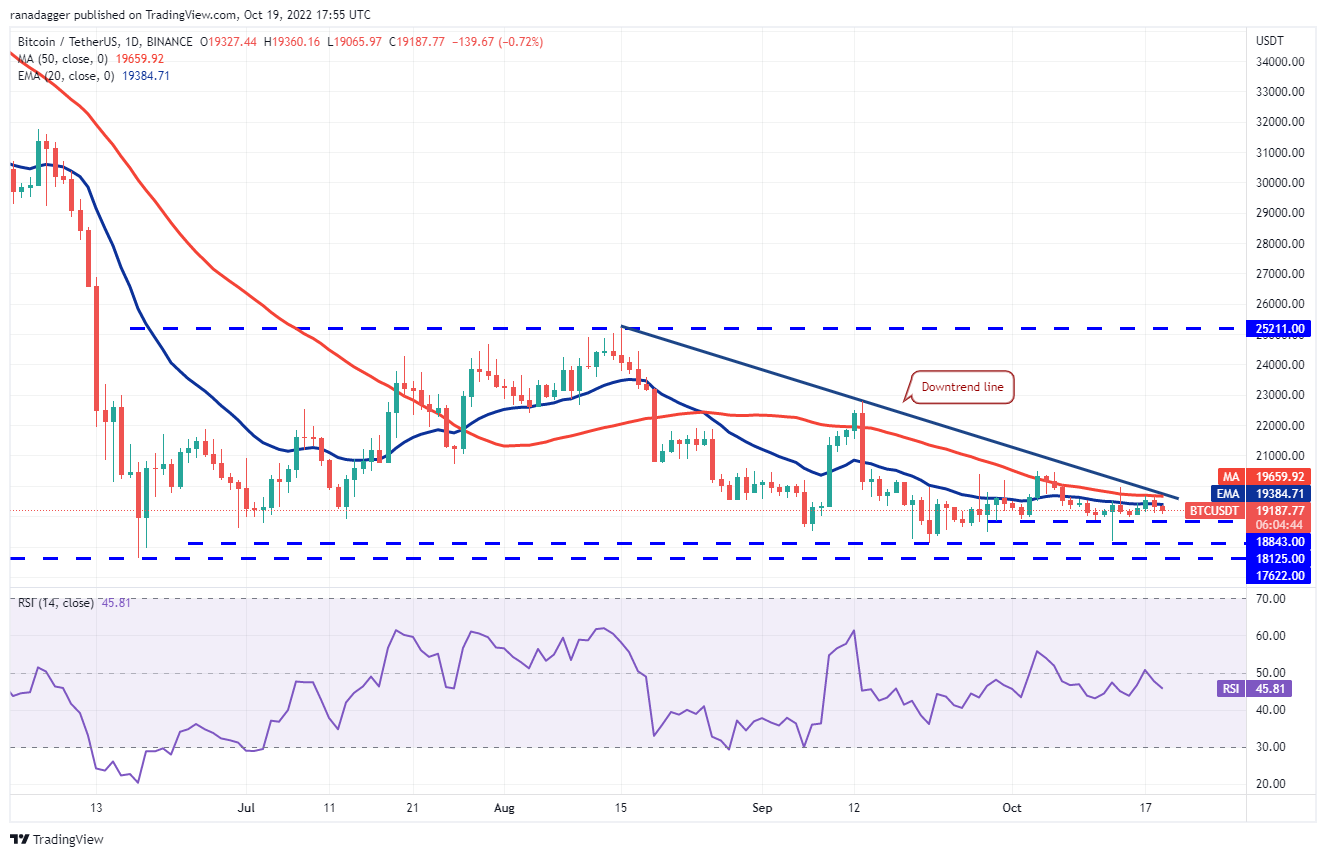 The sellers will once again try to challenge the immediate support at $18,843. If this level breaks down, the selling could pick up and the BTC/USDT pair could drop to the critical support zone between $18,125 and $17,622. The bears are expected to defend this zone with all their might because a break below it could start the next leg of the downtrend.

The first sign of strength will be a break and close above the downtrend line. That could attract further buying and push the price to $20,500. The bulls will have to overcome this obstacle to signal a possible short-term trend change. The pair could then climb toward the next resistance at $22,800.

Ether (ETH) re-entered the symmetrical triangle pattern on Oct. 17 but the bulls could not sustain the recovery. The price turned down on Oct. 18 and the bears are trying to pull the price to $1,263. 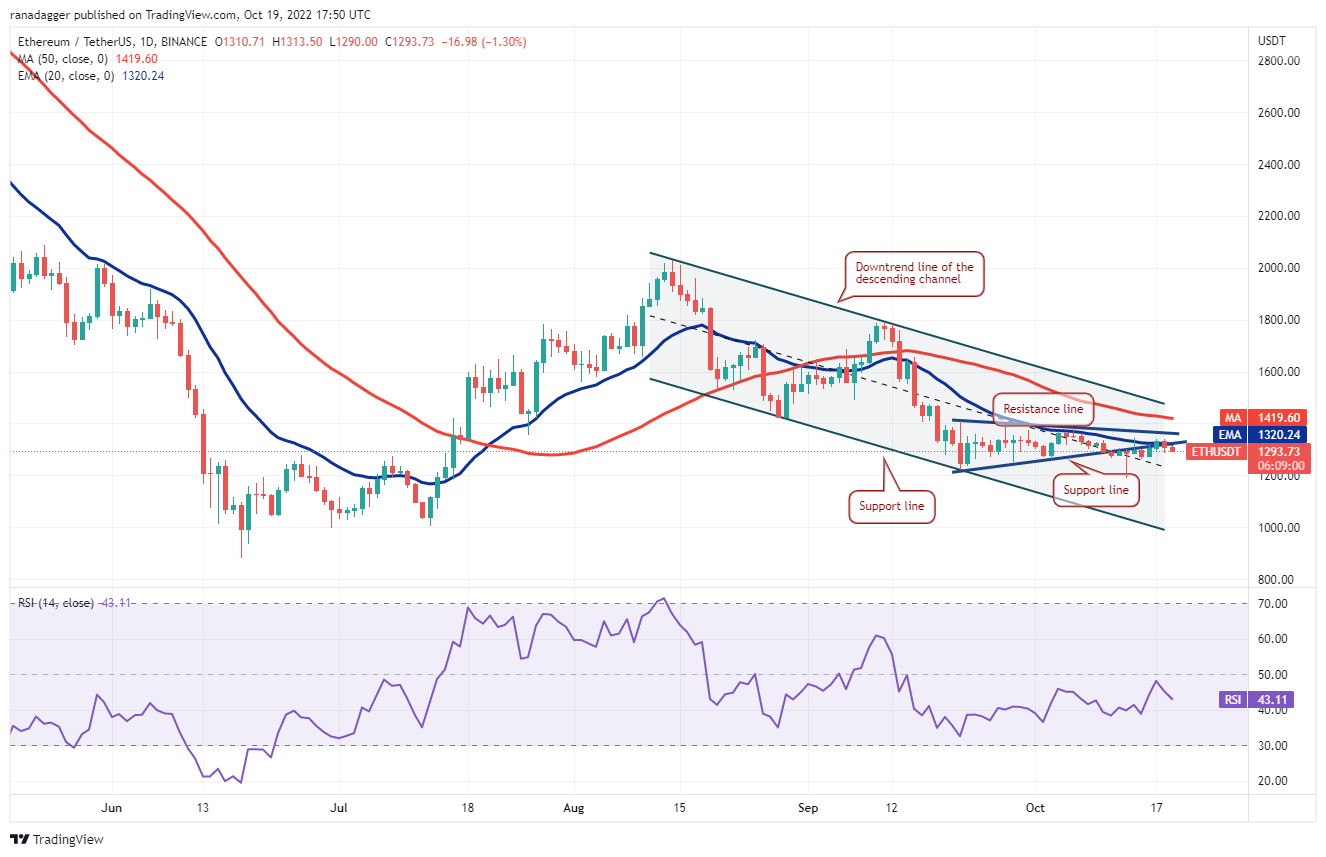 The gradually downsloping 20-day EMA ($1,320) and the RSI in the negative territory suggest that bears are at a marginal advantage. If the price slips below $1,263, the ETH/USDT pair could drop to $1,190.

Conversely, if the price turns up from the current level or the support at $1,263, it will indicate that lower levels are attracting buyers. The bulls will then attempt to push the price above the resistance line of the triangle.

If they manage to do that, the pair could rise to the downtrend line of the descending channel. A break above this resistance could suggest the end of the downtrend.

Although BNB (BNB) has been consolidating between $258 and $300 for the past several days, the bears are trying to gain the upper hand by defending the moving averages. 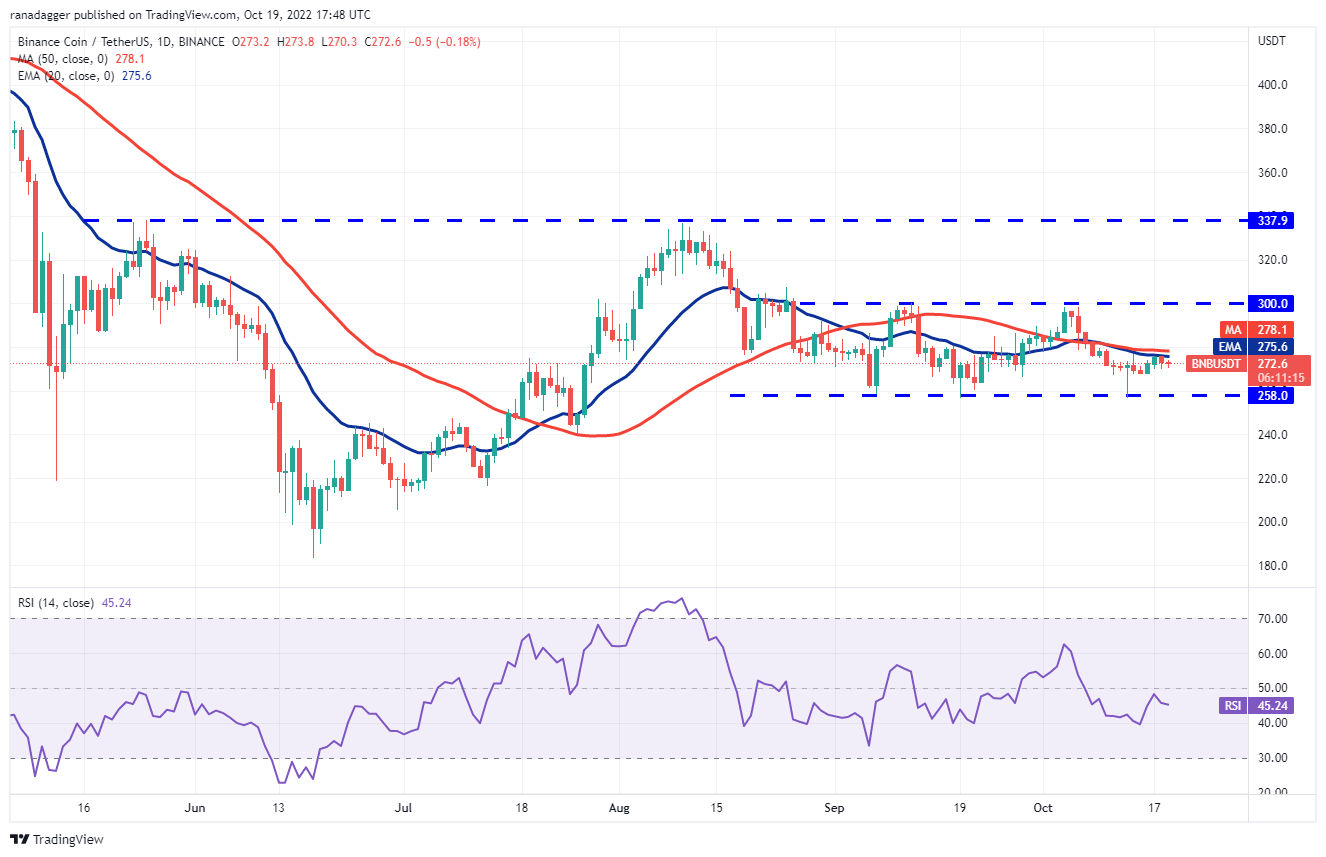 The sellers will now try to pull the price to the support of the range at $258. The repeated retest of a support level within a short time tends to weaken it. If this level gives way, the BNB/USDT pair could plummet to the next support at $216. The gradually downsloping 20-day EMA ($275) and the RSI near 45 suggest that bears have a slight edge.

Contrary to this assumption, if the price turns up and breaks above the moving averages, the pair could extend its stay inside the range and rise to the overhead resistance at $300.

XRP (XRP) recovered and closed above the 20-day EMA ($0.47) on Oct. 17 but the bulls could not build upon this advantage. This shows that bears are selling on rallies. 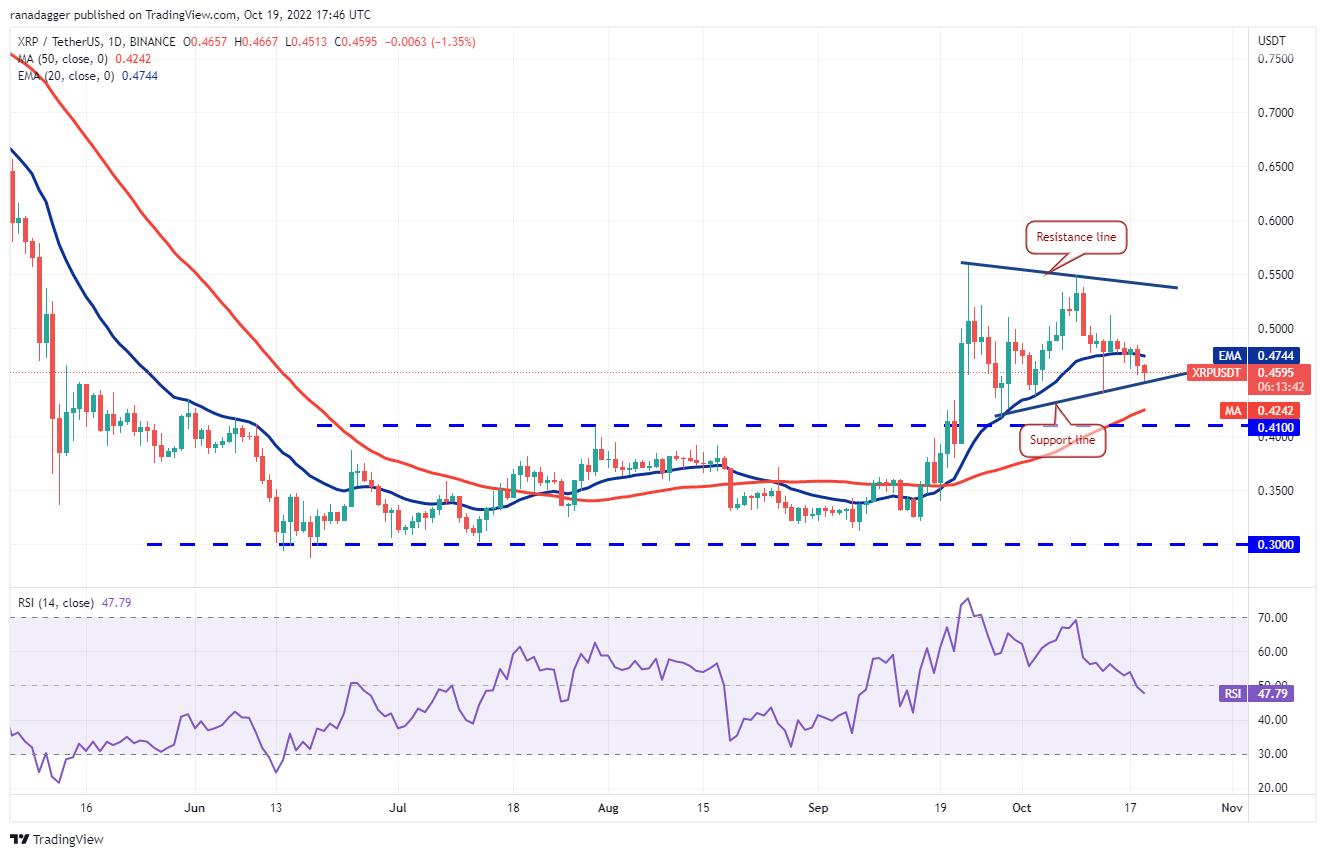 The price turned down sharply and slipped below the 20-day EMA on Oct. 18. The selling intensified and the XRP/USDT pair dropped to the support line of the triangle. This is an important level to watch out for in the near term because a break below it could sink the pair to $0.41.

In a strong trend, the relief rally usually lasts between one to three days and that is what happened in Cardano (ADA). The price turned down after a two-day recovery on Oct. 18 indicating that bears are selling on every minor rally. 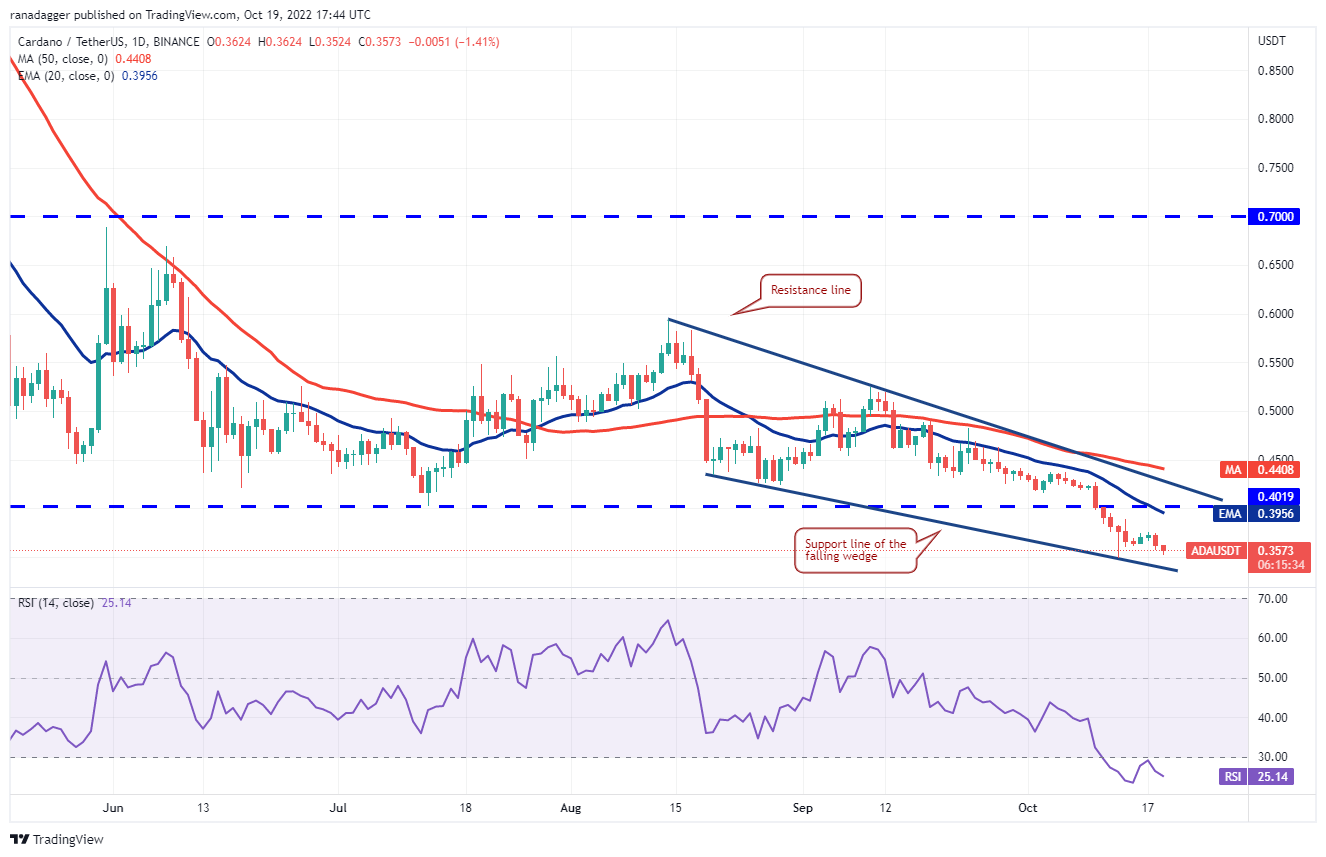 The bears will try to build upon their advantage and sink the ADA/USDT pair to the support line of the falling wedge. If this support also cracks, the selling could accelerate and the pair may plunge to $0.30.

If bulls want to avert a collapse, they will have to quickly push the price above the 20-day EMA ($0.39). The pair could then rise to the resistance line of the wedge. A break above this level could point to a potential trend change. 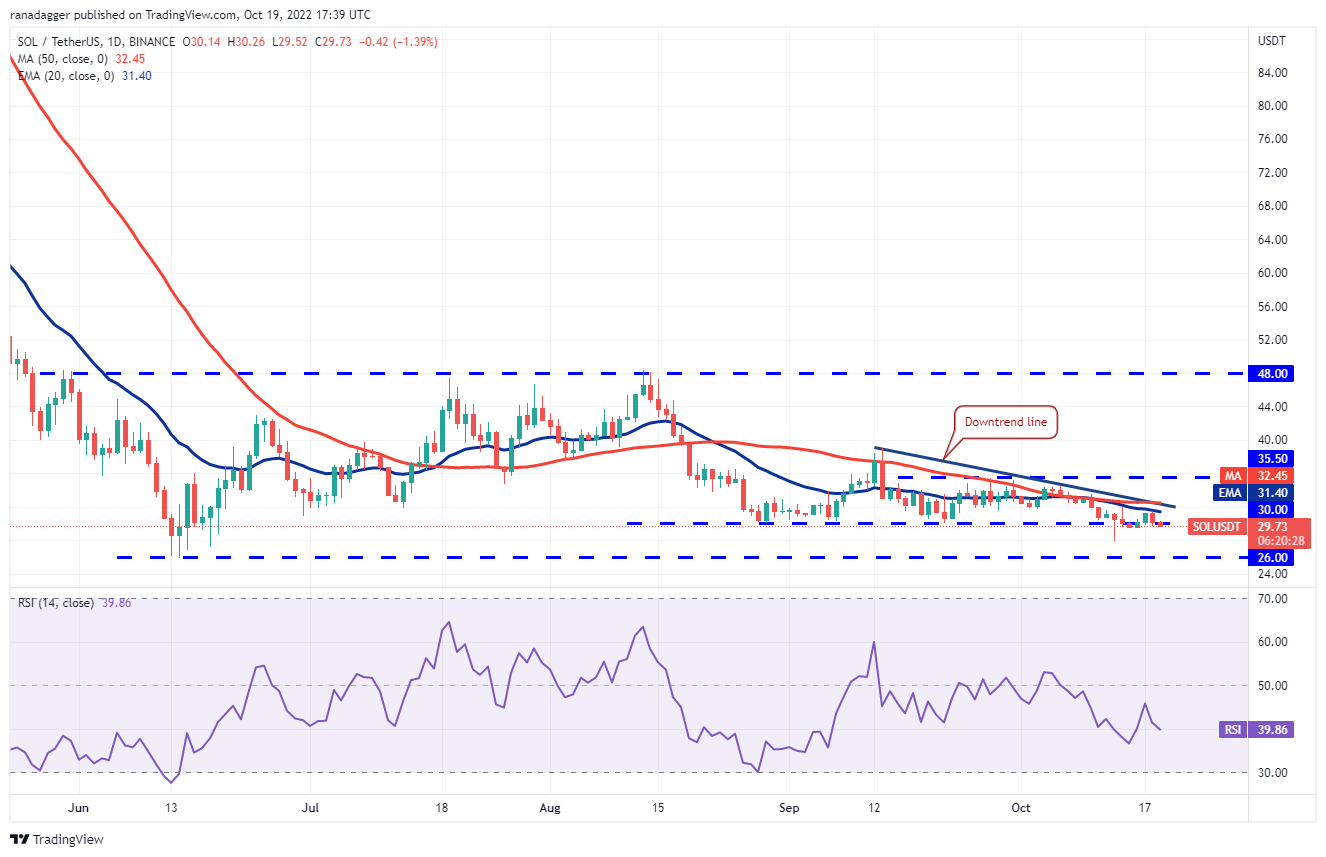 If the price rebounds off the current level, the bulls will again try to propel the SOL/USDT pair to the downtrend line. Buyers will have to overcome this barrier to open the doors for a possible rally to $35.50.

However, the bears may have other plans. They will strive to sink the price below $29.42 and challenge the intraday low of $27.87 made on Oct. 13. This level is likely to attract strong buying by the bulls but if bears manage to break the support, the next stop could be $26.

Dogecoin (DOGE) pierced the 20-day EMA ($0.06) on Oct. 18 but met with stiff opposition at the 50-day SMA ($0.06). This suggests that the sentiment remains negative and traders are selling on minor rallies. 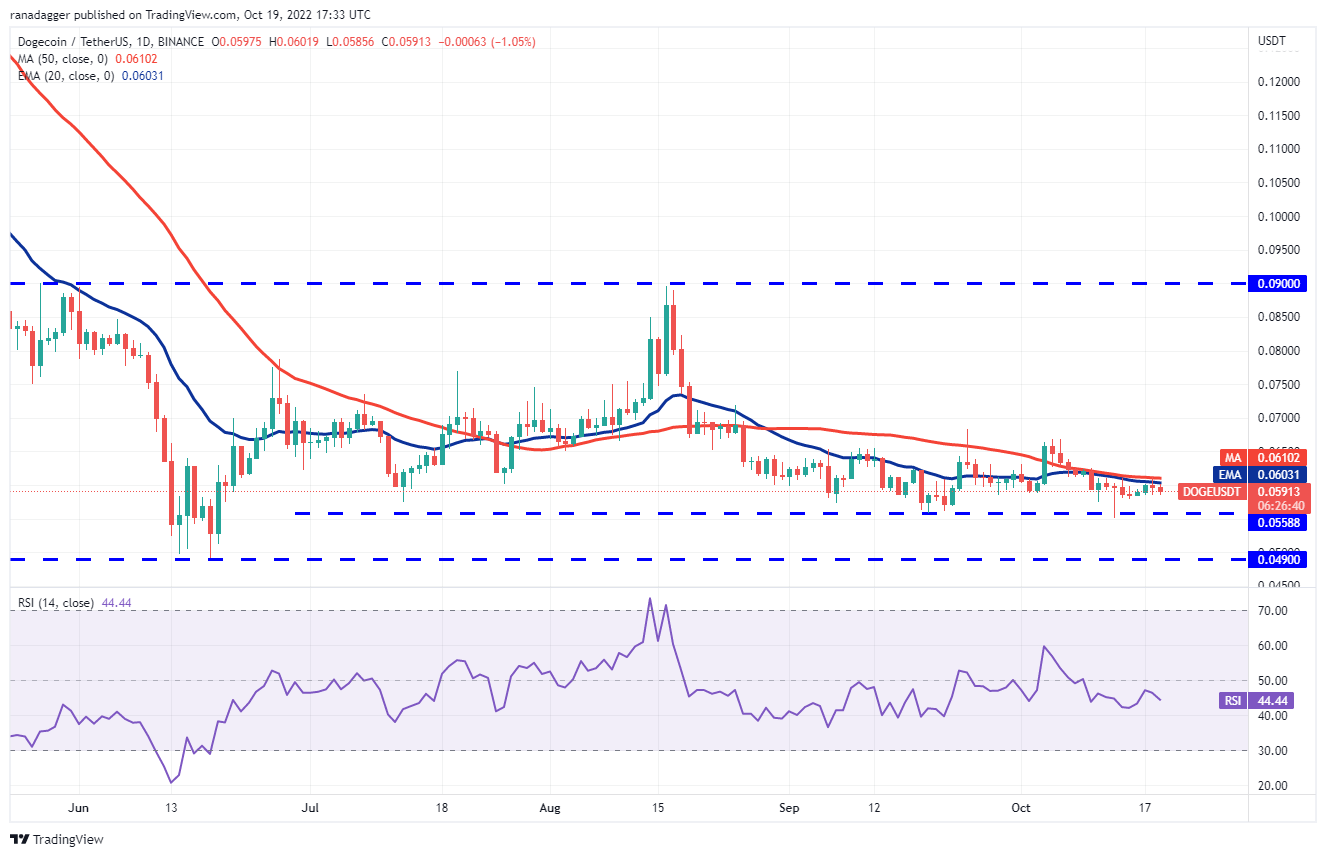 The bears will try to sink the price to the support near $0.06. The bulls had successfully defended this level on two previous occasions, hence they will again try to repeat their performance.

If the price rebounds off the support, the pair could again rise to the moving averages. Buyers will have to overcome this barrier to set up a rally to $0.07.

On the contrary, if the price breaks below the support, the DOGE/USDT pair could drop to the June low near $0.05. The bulls are expected to defend this level with all their might.

Buyers failed to push Polkadot (DOT) above the 20-day EMA ($6.27) on Oct. 17 and 18, indicating that the bears are vigorously defending this level. 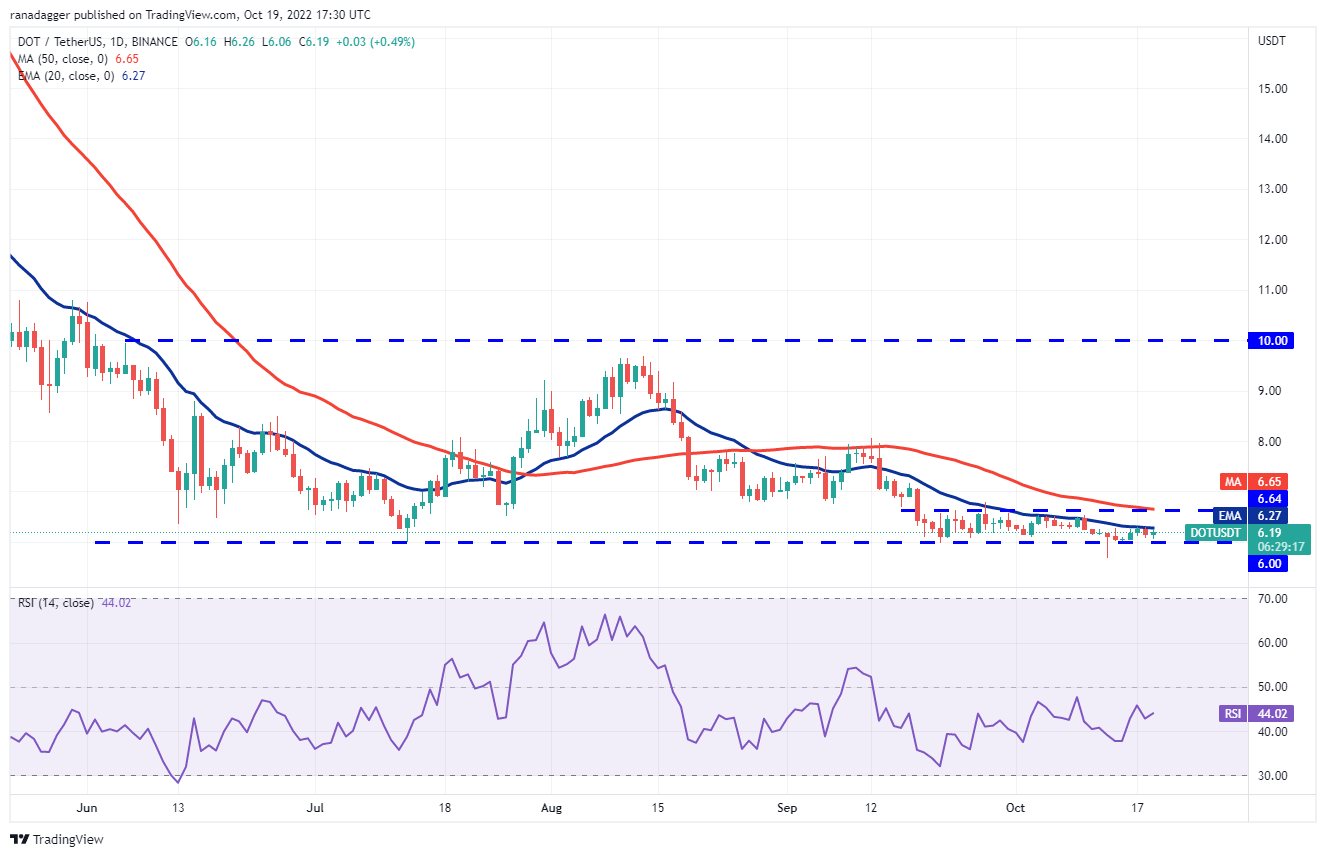 The sellers will try to further cement their advantage by pulling the price below the vital support at $6. If they succeed, the selling could accelerate and the DOT/USDT pair could decline to $5.68. If this level also cracks, the next stop could be $5.36.

Alternatively, if the price rebounds off $6 with force, it will indicate that the bulls are accumulating on dips. Buyers will then again try to clear the overhead hurdle at the 20-day EMA and push the price toward $6.64.

Polygon (MATIC) broke and closed above the downtrend line on Oct. 17. This indicates the start of a sustained recovery in the near term. 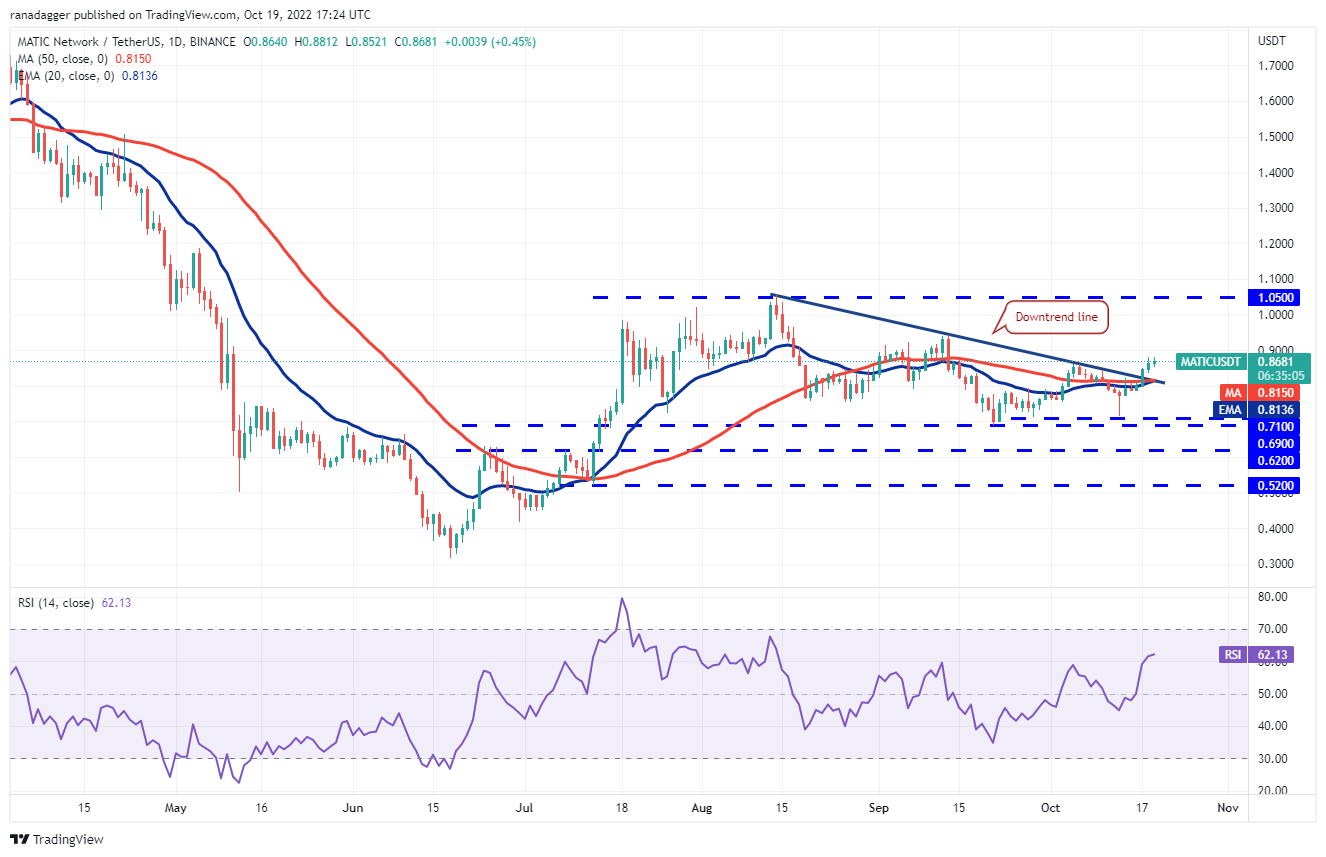 The MATIC/USDT pair could rise to $0.94 where the bears may mount a strong defense. If the price turns down from this level but rebounds off the 20-day EMA ($0.81), it will suggest that the sentiment has turned positive and traders are buying on dips. That could improve the prospects of a rally to $1.05.

Alternatively, if the price turns down and breaks below the moving averages, it will suggest that the recent breakout may have been a bull trap. The pair could then decline to $0.69. 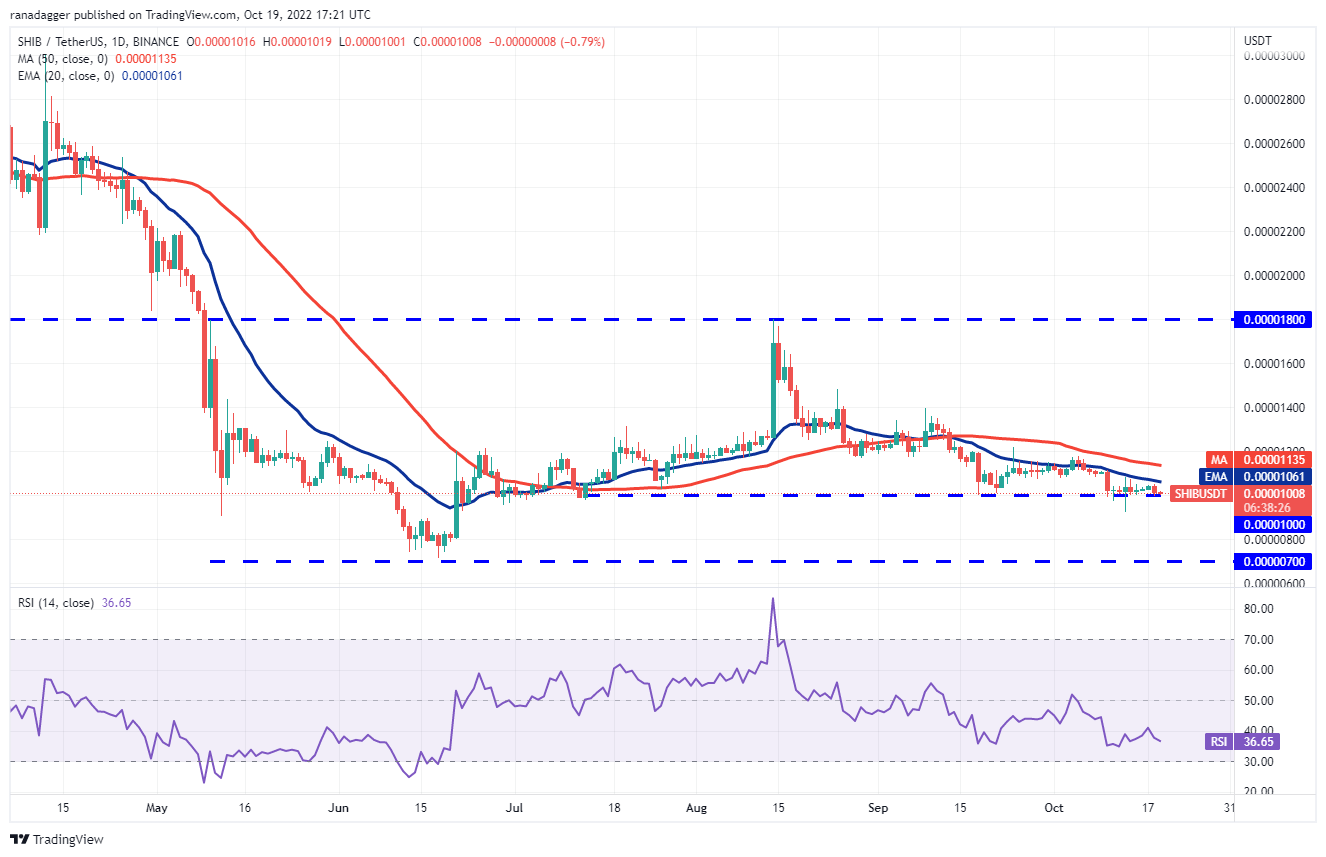 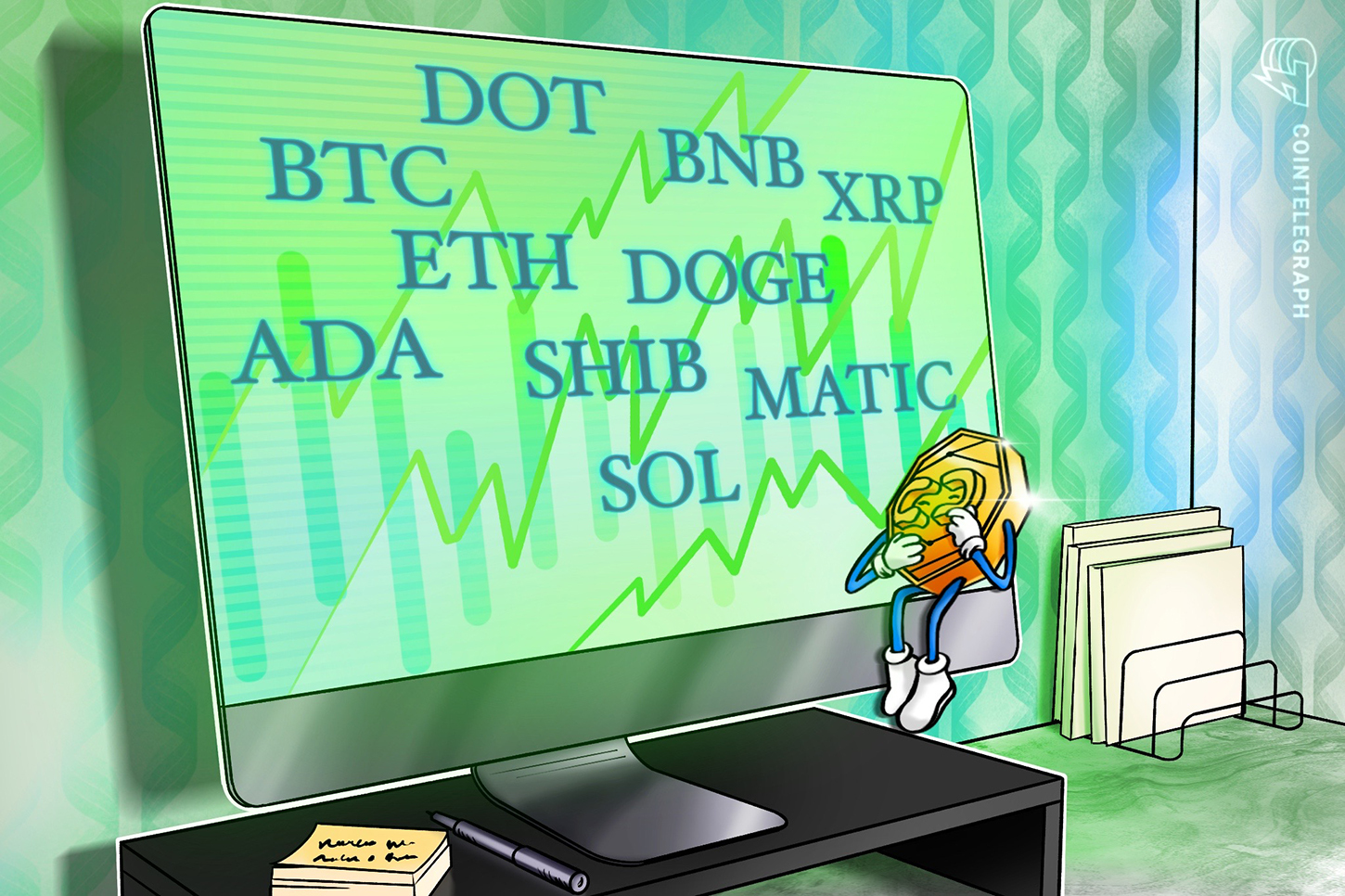 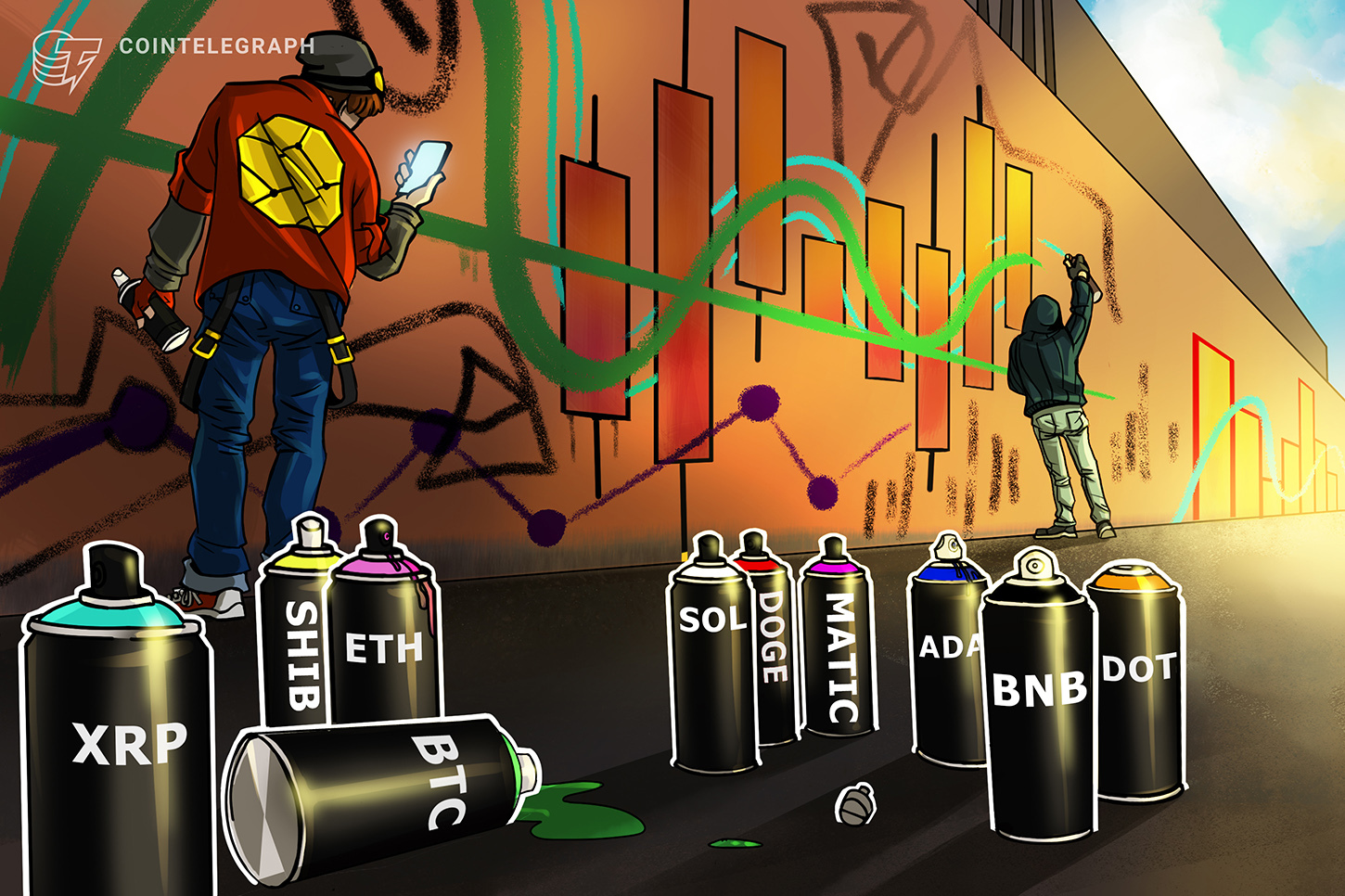 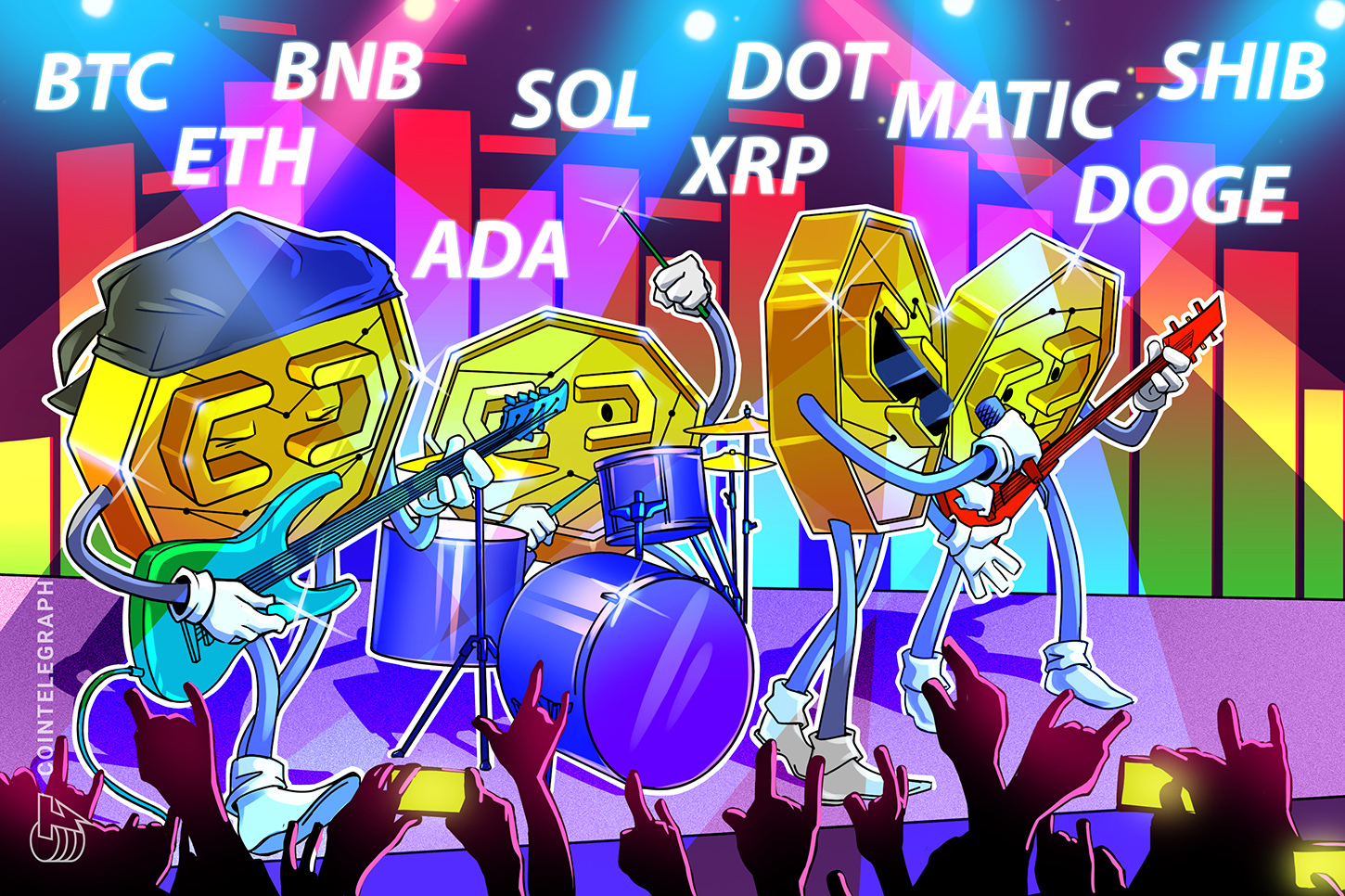