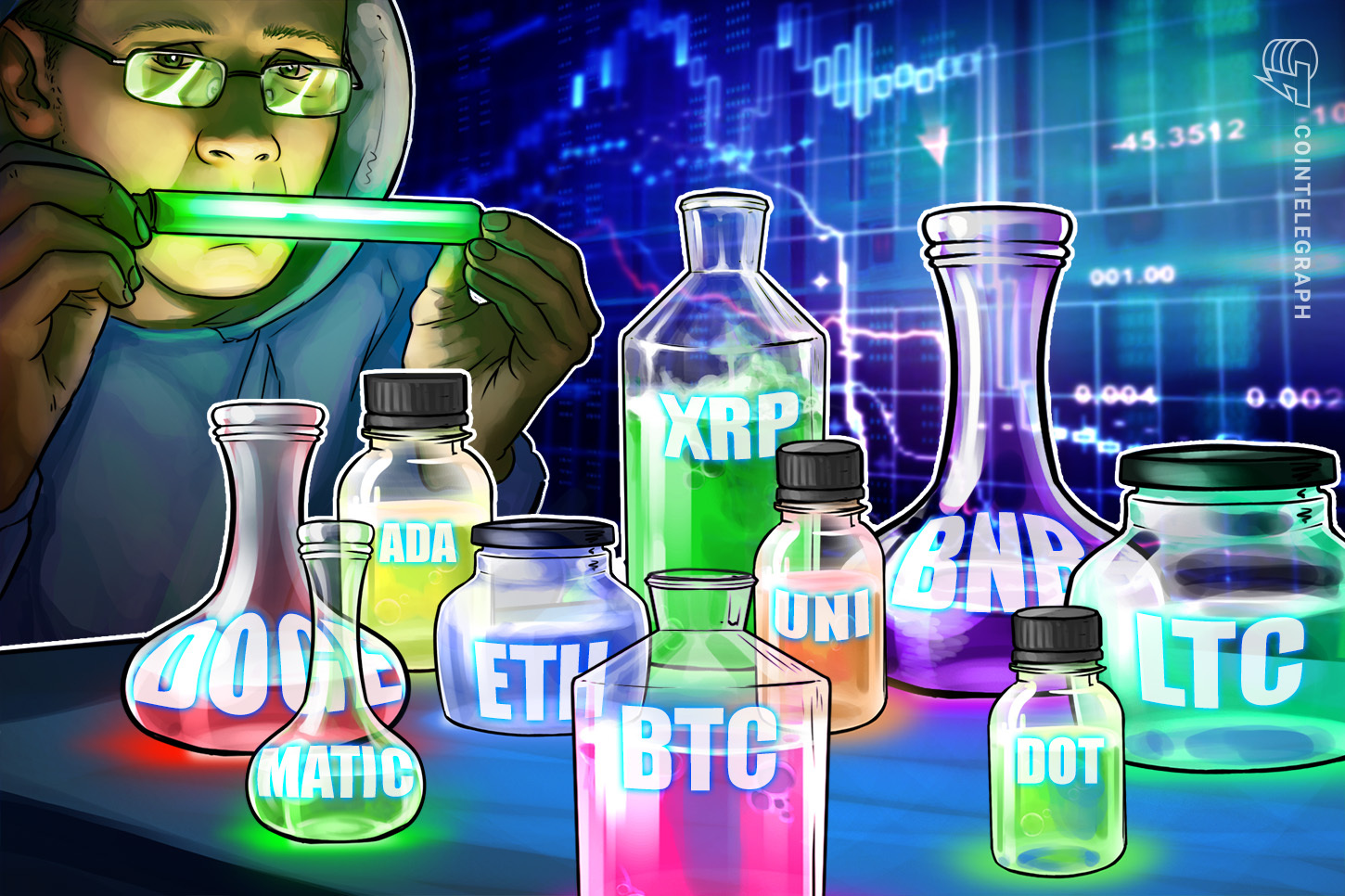 FTX’s collapse dealt a major blow to the already fragile sentiment among cryptocurrency investors. Although a quick recovery is unlikely, Blockchain analysis firm Chainalysis said that the crypto universe could emerge stronger from this crisis. Chainalysis’ research lead Eric Jardine arrived at the conclusion after comparing FTX’s fall to that of Mt. Gox.

Another calming statement came from Bloomberg Intelligence exchange-traded fund analyst James Seyffart, who said that there was a “99.9% chance” that the Grayscale Bitcoin Trust (GBTC) held the Bitcoin (BTC) it claimed. He added that GBTC was “unlikely” to be liquidated. 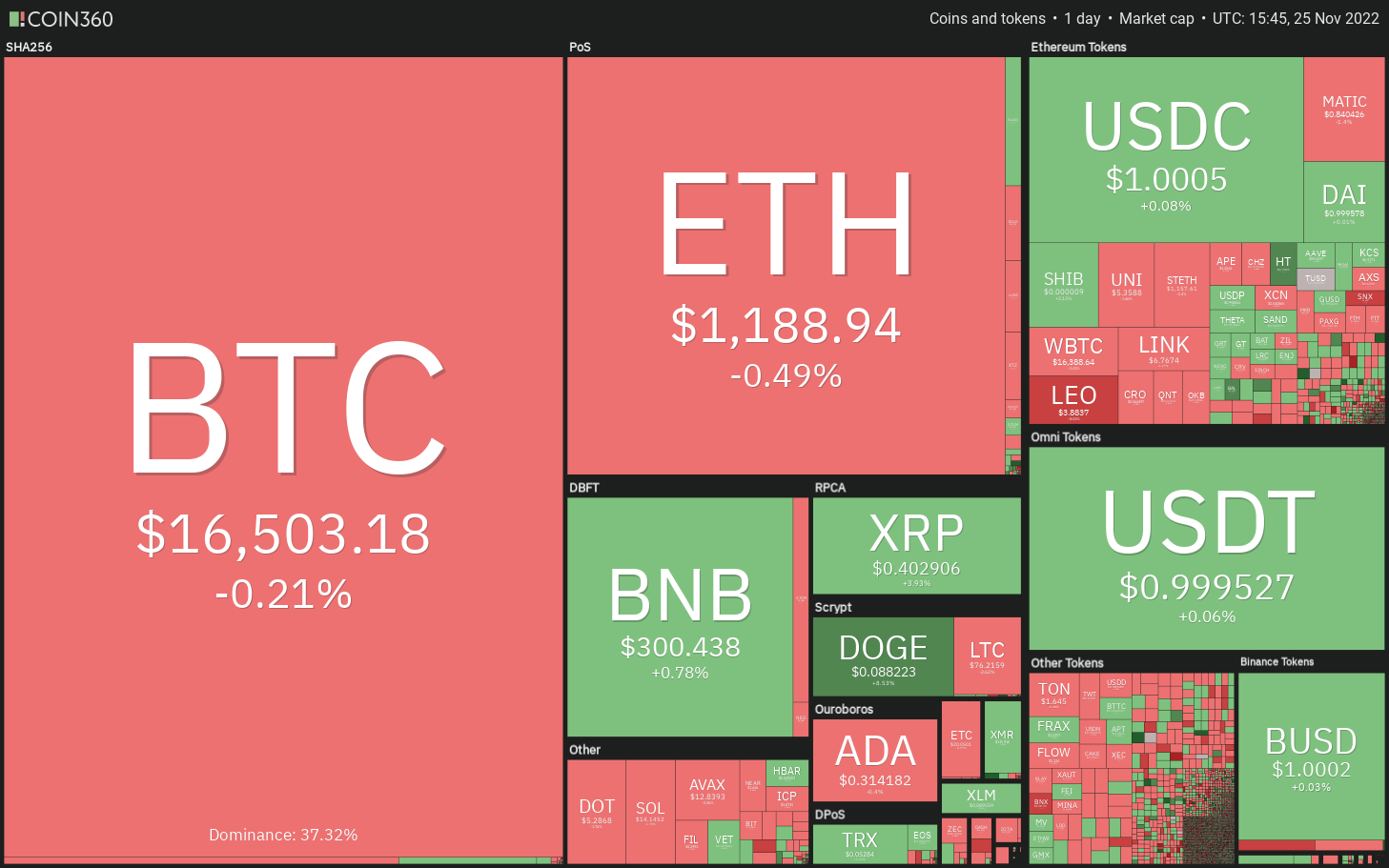 The negative events of the past few days do not seem to have scared away the small investors who remain on an accumulating spree. According to blockchain analytics company Glassnode, the number of wallets holding at least one Bitcoin or more soared in November and reached 950,000.

Could Bitcoin and altcoins extend their recovery in the near term? Let’s study the charts of the top-10 cryptocurrencies to find out.

Bitcoin rebounded off $15,476 on Nov. 21, indicating that lower levels are attracting buying by the aggressive bulls. The relative strength index (RSI) has formed a bullish divergence, suggesting that the bears may be losing their grip. 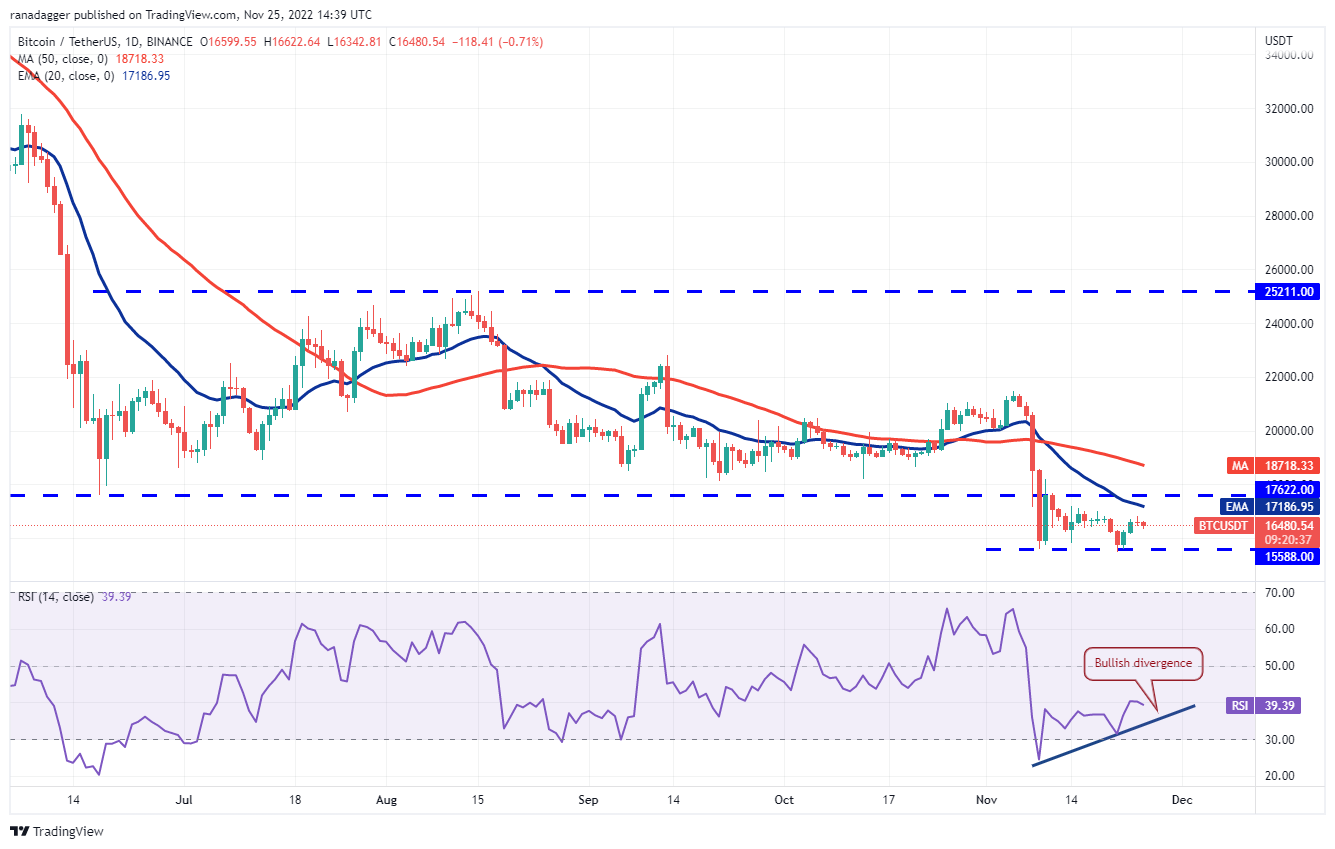 Buyers will try to push the price above the overhead resistance zone between the 20-day exponential moving average ($17,186) and $17,622. If they manage to do that, the BTC/USDT pair could indicate a possible change in trend.

The pair could then rise to the 50-day simple moving average ($18,718) and thereafter challenge the psychological level of $20,000.

Contrary to this assumption, if the price turns down from the current level or the overhead resistance, it will suggest that bears remain sellers on relief rallies. The bears will then again attempt to sink the pair below $15,588 and resume the downtrend. The next support on the downside is at $12,200.

Ether (ETH) rebounded off the strong support near $1,073 on Nov. 22 and broke above the downtrend line on Nov. 24. This suggests that the bulls are attempting a comeback. 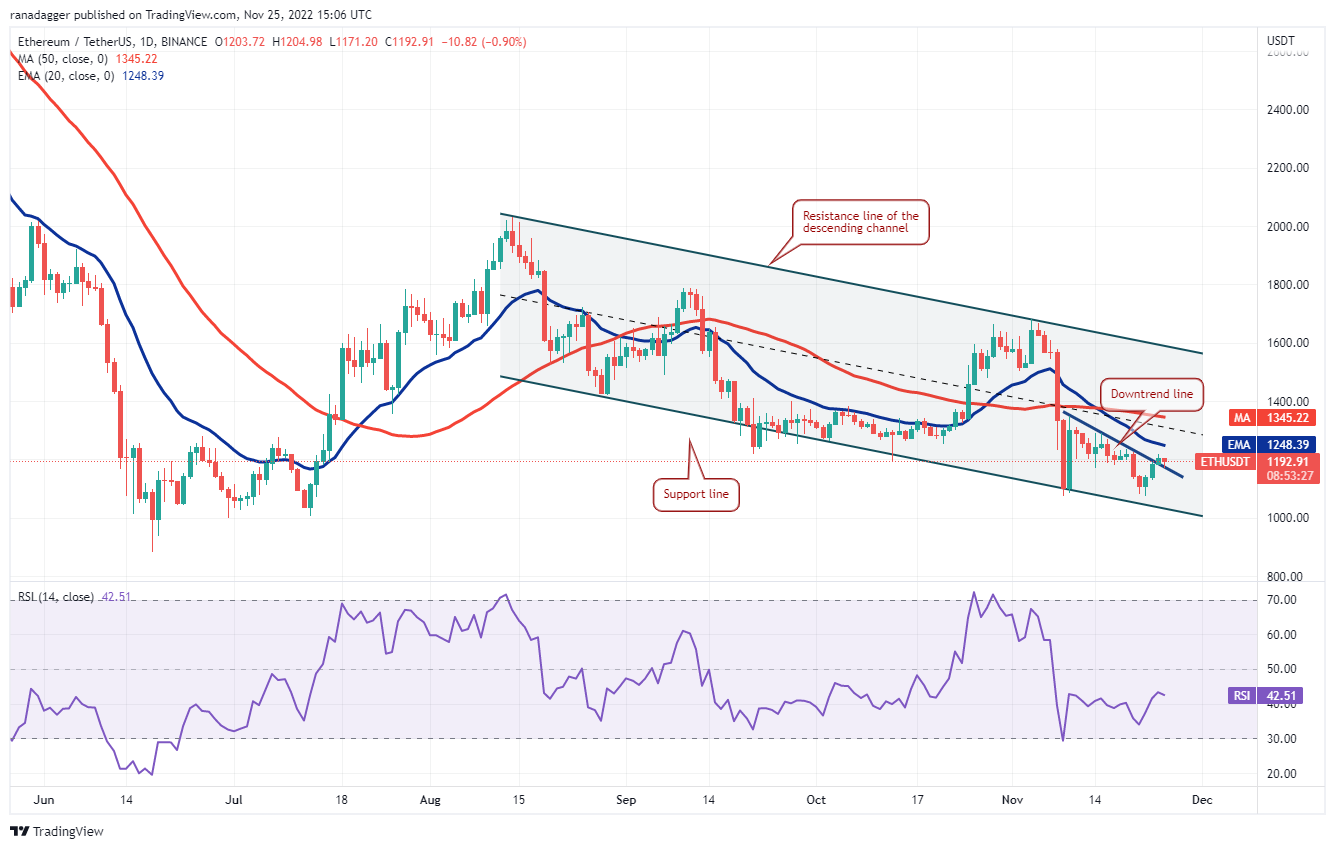 The ETH/USDT pair could next rise to the 20-day EMA ($1,248), which is an important level to watch out for. If buyers overcome this barrier, the pair could attempt a rally to the resistance line of the descending channel pattern.

On the other hand, if the price turns down from the 20-day EMA, it will suggest that the sentiment remains negative and traders are selling on rallies. The bears will then endeavor to pull the price to the support line of the channel. If this support cracks, the pair could plunge to the critical support zone between $1,000 and $881.

BNB (BNB) broke below the strong support of $258 on Nov. 21 but this proved to be a bear trap. The price turned up on Nov. 22 and the momentum picked up further on Nov. 23. This drove the price to the overhead resistance at $300. 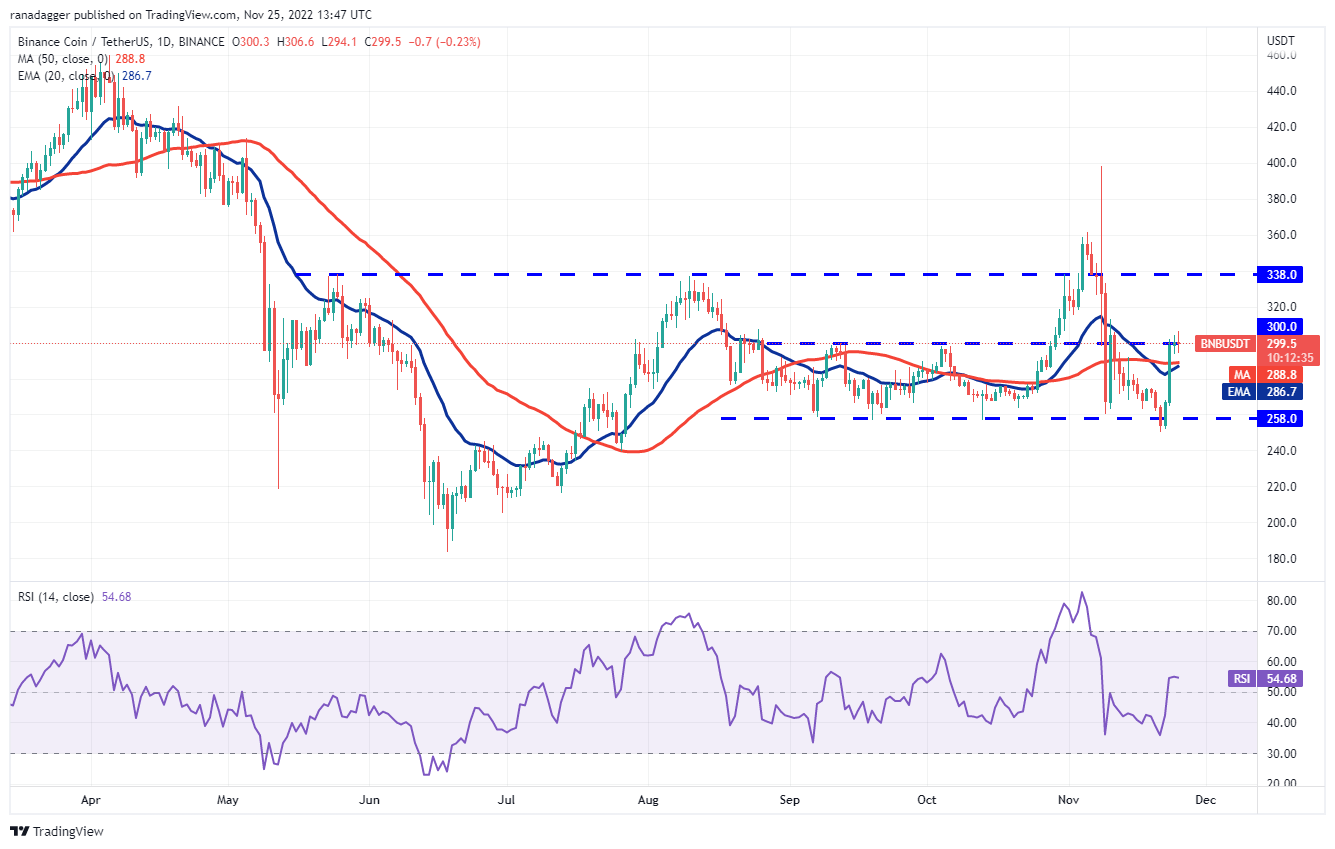 The bulls and the bears are witnessing a tough battle at $300 as seen from the Doji candlestick pattern formed on Nov. 24 and 25. If bulls come out on top, the BNB/USDT pair could climb to $338 where the bears may again mount a strong defense.

On the contrary, if the price turns down from the current level and breaks below the moving averages, it will suggest that the pair may remain range-bound between $258 and $300 for a few more days.

XRP (XRP) turned up from $0.34 on Nov. 21 and shot up above the symmetrical triangle and the 20-day EMA ($0.40) on Nov. 24. This showed that the uncertainty between the buyers and sellers resolved in favor of the bulls. 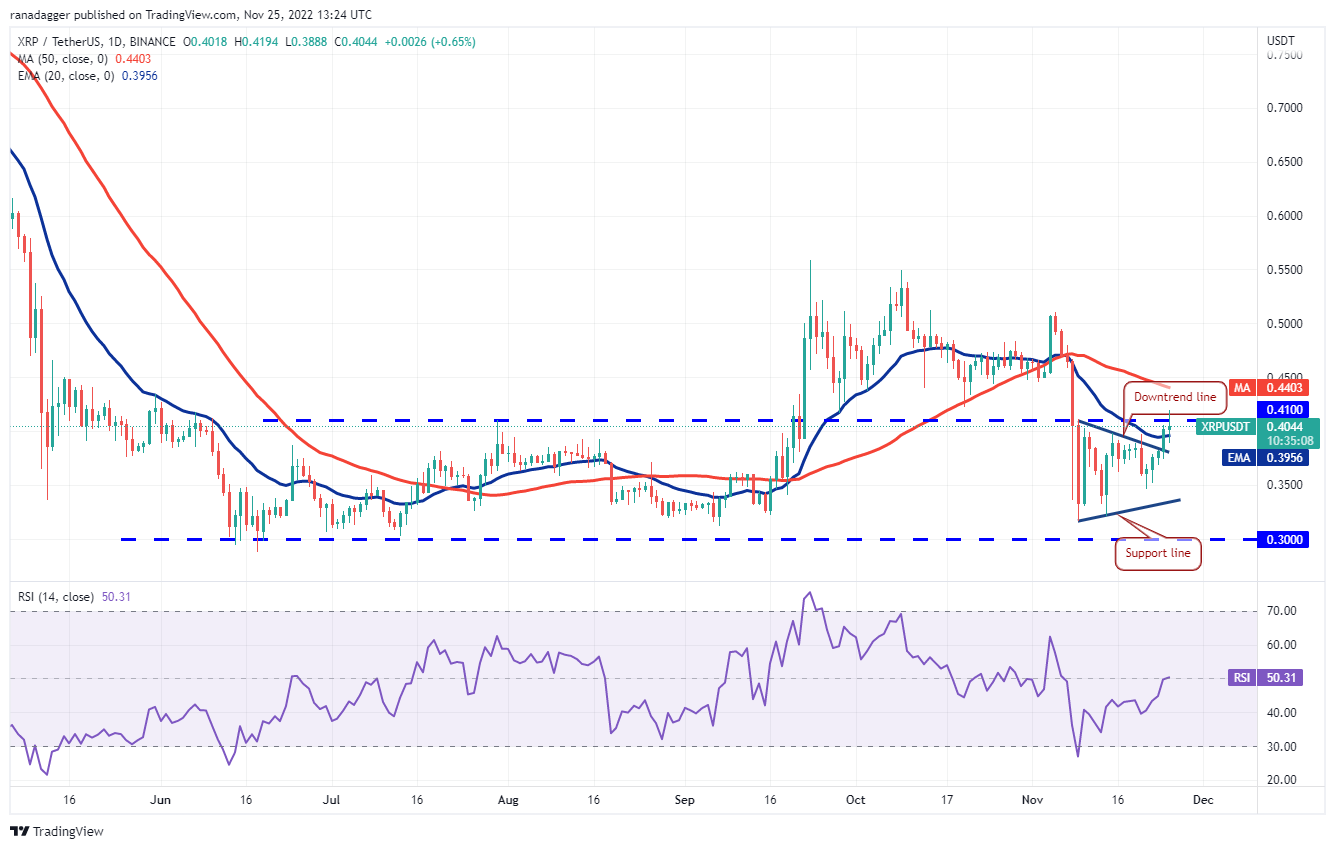 The buyers are trying to build upon the advantage by pushing the price above the overhead resistance at $0.41. If they succeed, the XRP/USDT pair could pick up momentum and rise to $0.50 and then to $0.56.

However, the bears are likely to have other plans. They will try to stall the recovery at $0.41 and pull the price back into the triangle. If that happens, the aggressive bulls may get trapped and the pair could then plummet to the support line. 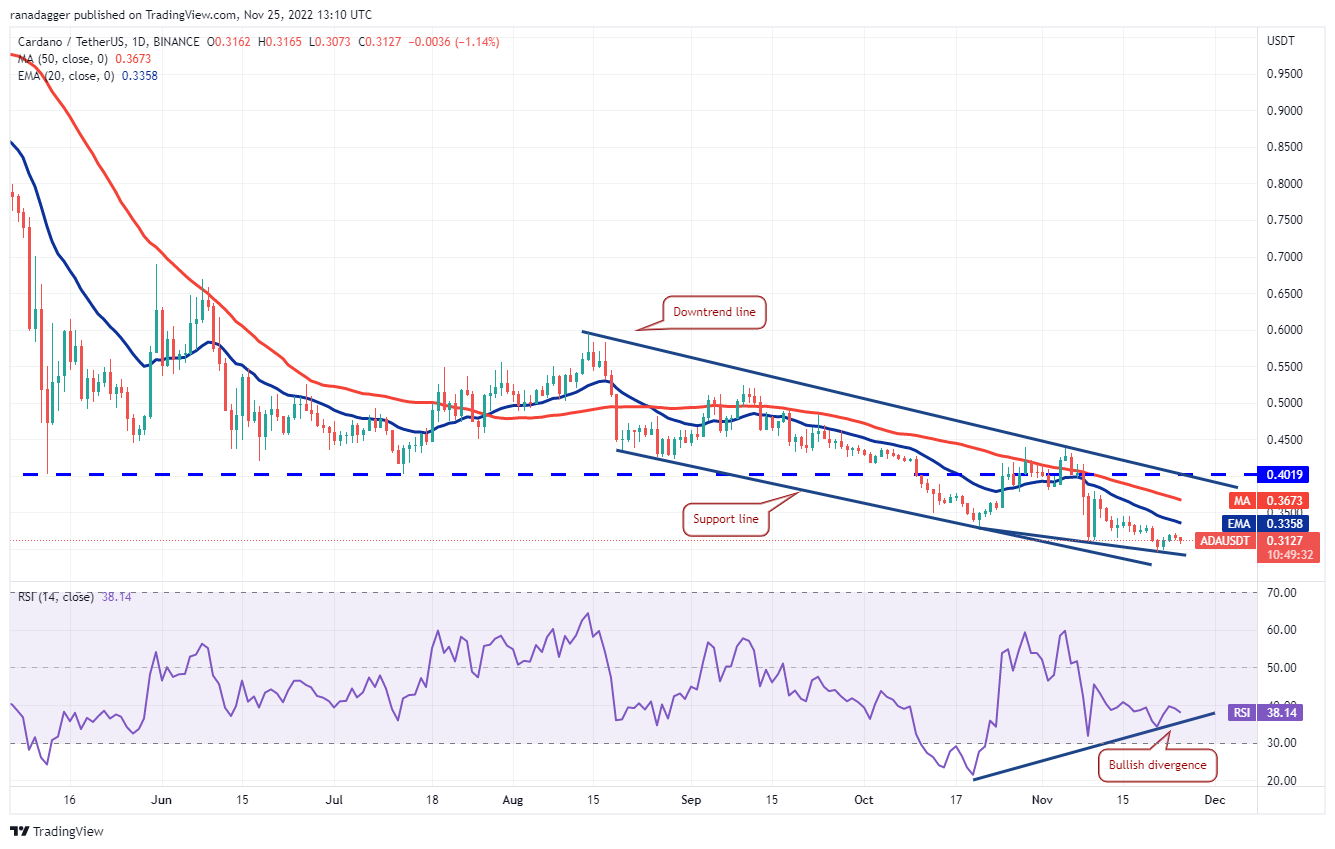 The downsloping moving averages indicate that bears have the upper hand but the RSI is forming a bullish divergence, which suggests that the selling pressure may be reducing. The first sign of strength will be a break above the 20-day EMA. The ADA/USDT pair could then attempt a rally to the 50-day SMA ($0.36) and subsequently to the downtrend line.

Instead, if the price turns down from the current level or the 20-day EMA, the pair could extend its downtrend and drop to the support line.

Dogecoin (DOGE) rebounded off the support at $0.07 on Nov. 21, indicating that the bulls are trying to establish a higher low at this level. 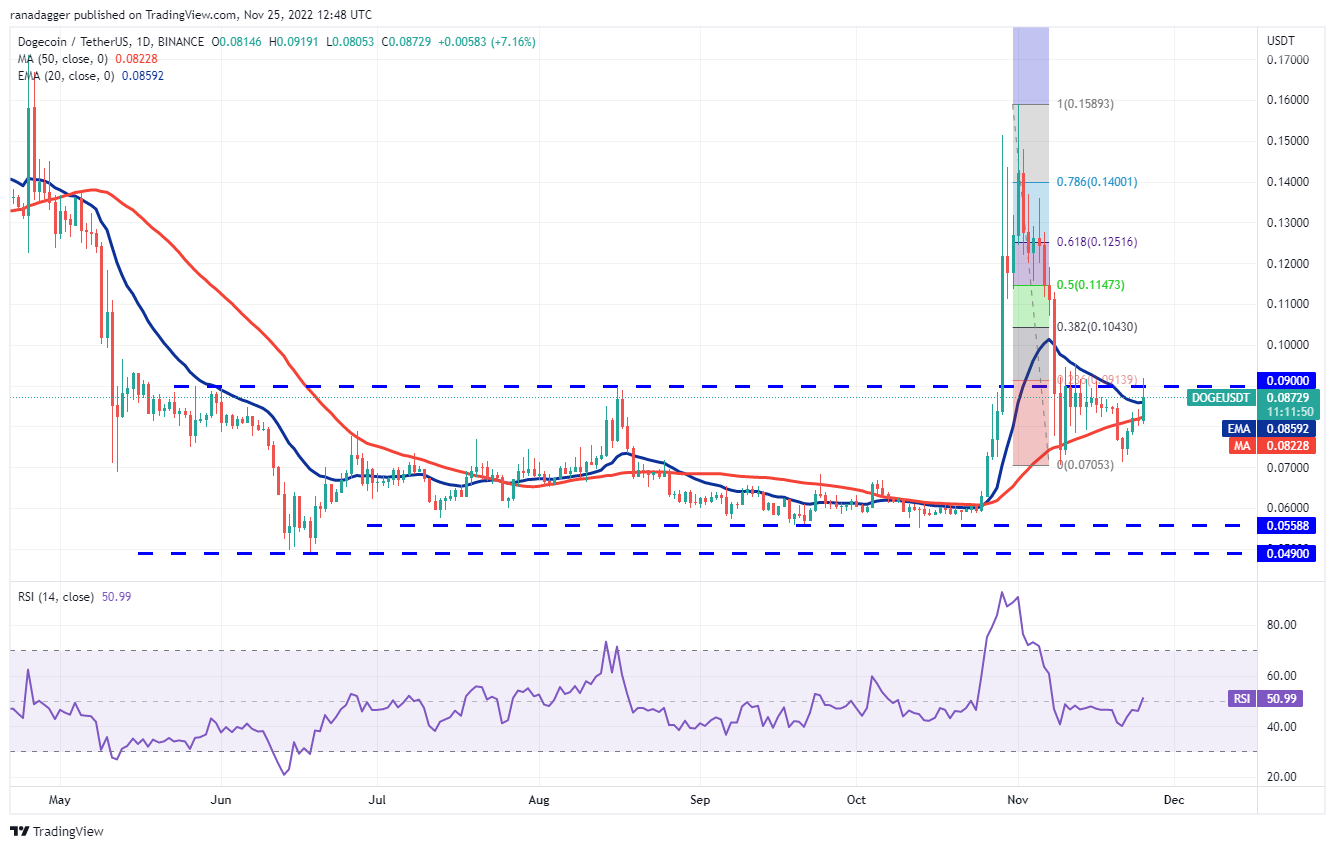 The relief rally has reached $0.09 where the bulls are likely to encounter strong resistance from the bears. If the price turns down from the current level, the DOGE/USDT pair could remain range-bound between $0.07 and $0.09 for some time.

Polygon (MATIC) rebounded off the uptrend line on Nov. 21 but the relief rally turned down from the moving averages on Nov. 24. This suggests that the bears are active at higher levels. 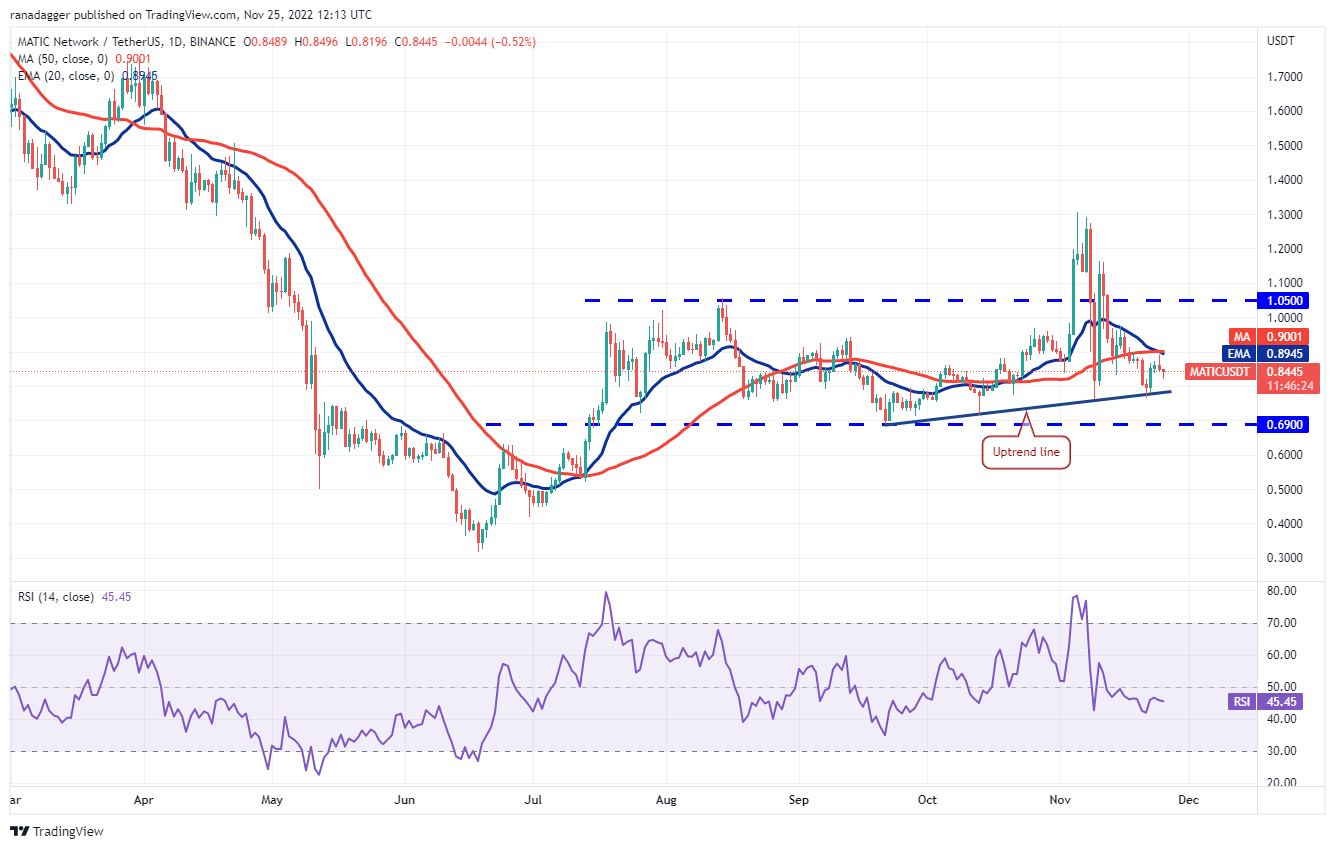 The sellers may once again attempt to sink the price below the uptrend line. If they manage to do that, the MATIC/USDT pair could drop to the important support at $0.69. The bulls are expected to vigorously defend this level because if it cracks, the pair could start a new down move and drop to $0.52.

Conversely, if the price turns up and rises above the moving averages, the short-term advantage could tilt in favor of the bulls. The pair could then rally to $0.97 and later to $1.05.

Polkadot’s (DOT) rebound off $5 is facing resistance near the 20-day EMA ($5.69). This suggests that bears continue to view the rallies as a selling opportunity. 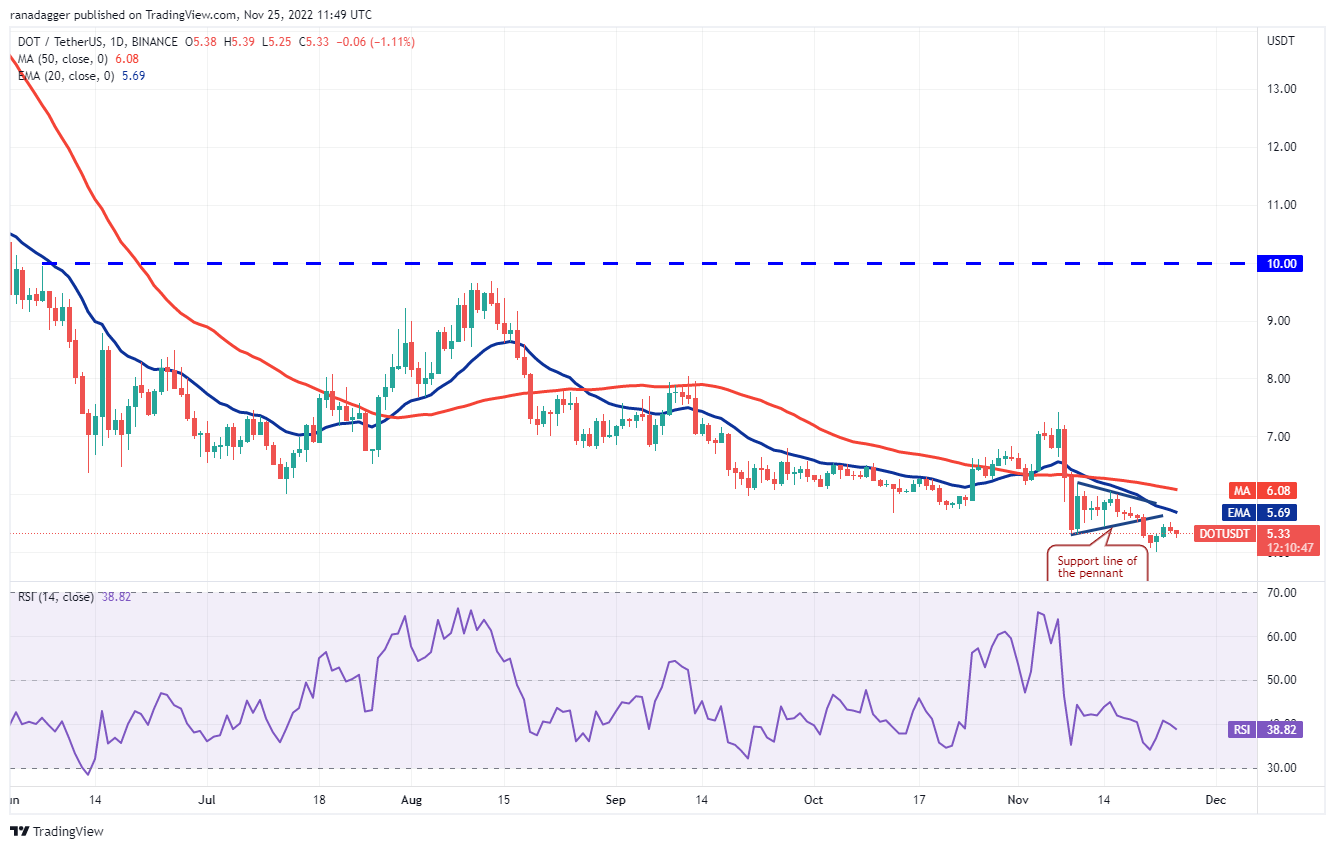 If the price turns down from this level, the bears will try to pull the DOT/USDT pair to the crucial support at $5. A break and close below this level will indicate the resumption of the downtrend. The pair could then decline to $4.32.

To invalidate this negative view, the bulls will have to push and sustain the price above the moving averages. If they can pull it off, it will suggest that the downtrend could be ending. The pair could then rally to $7.43.

Litecoin (LTC) surged and closed above the overhead resistance of $75 on Nov. 23 but the bulls could not build upon the breakout. The bears are attempting to pull the price back below $75 on Nov. 25. 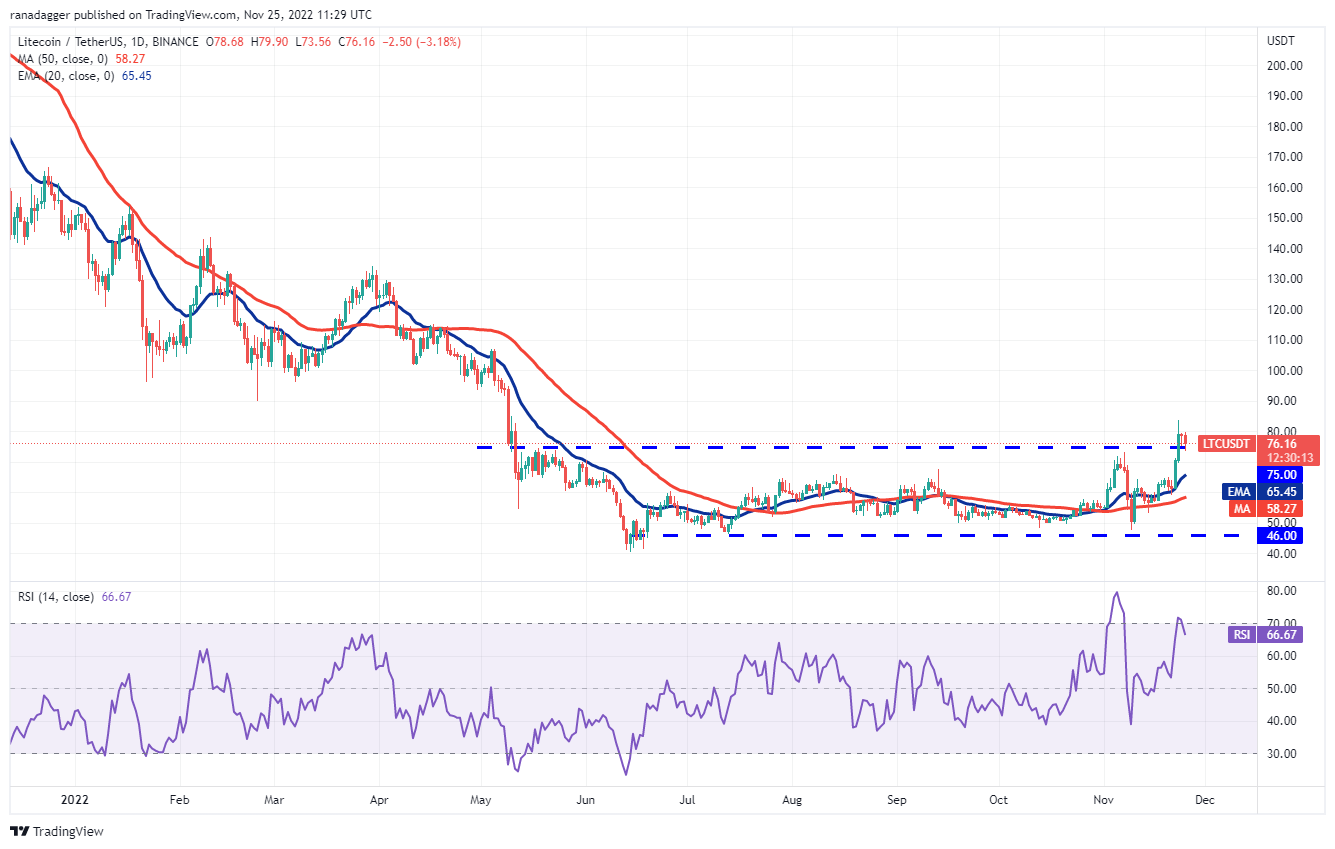 If they succeed, the LTC/USDT pair could drop to the 20-day EMA ($65). This is an important level to keep an eye on because a strong bounce off it will suggest a change in sentiment from selling on rallies to buying on dips. The bulls will then strive to push the price above $84 and open the doors for a possible rally to $104.

Alternatively, if bears pull the price below the 20-day EMA, it will indicate that higher levels continue to attract sellers. The pair could then drop to the 50-day SMA ($58).

Uniswap (UNI) has formed a large symmetrical triangle pattern, suggesting indecision among the bulls and the bears. The price rebounded off the support line of the triangle on Nov. 22, indicating buying at lower levels. 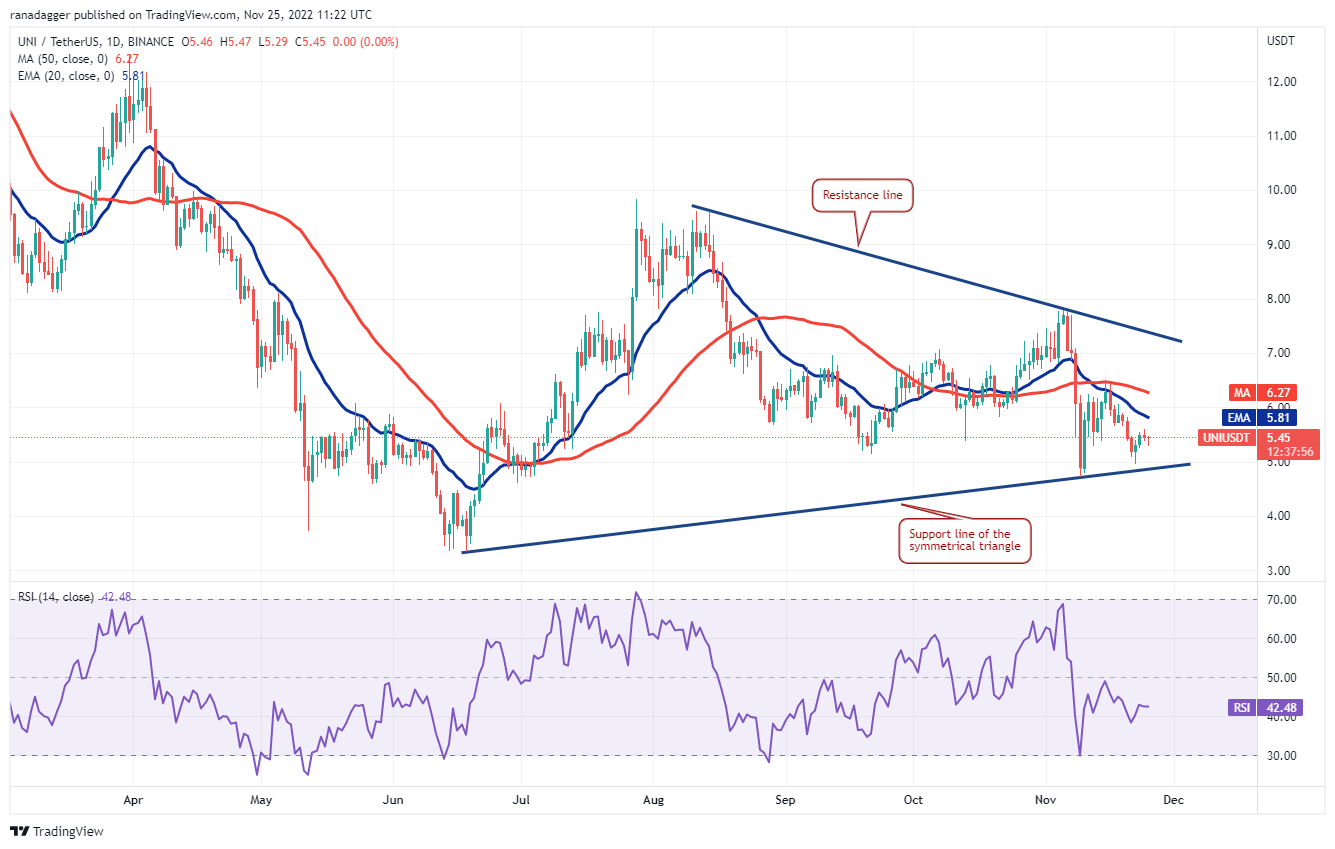 The recovery attempt could face resistance at the moving averages. If the price turns down from it, the bears will again try to sink the UNI/USDT pair below the triangle. If that happens, the pair could drop to $3.33.

Contrary to this assumption, if bulls drive the price above the moving averages, the pair could climb to the resistance line of the triangle. This level could act as a major hurdle but if bulls overcome it, the pair could rise to $8 and thereafter attempt a rally to $10. 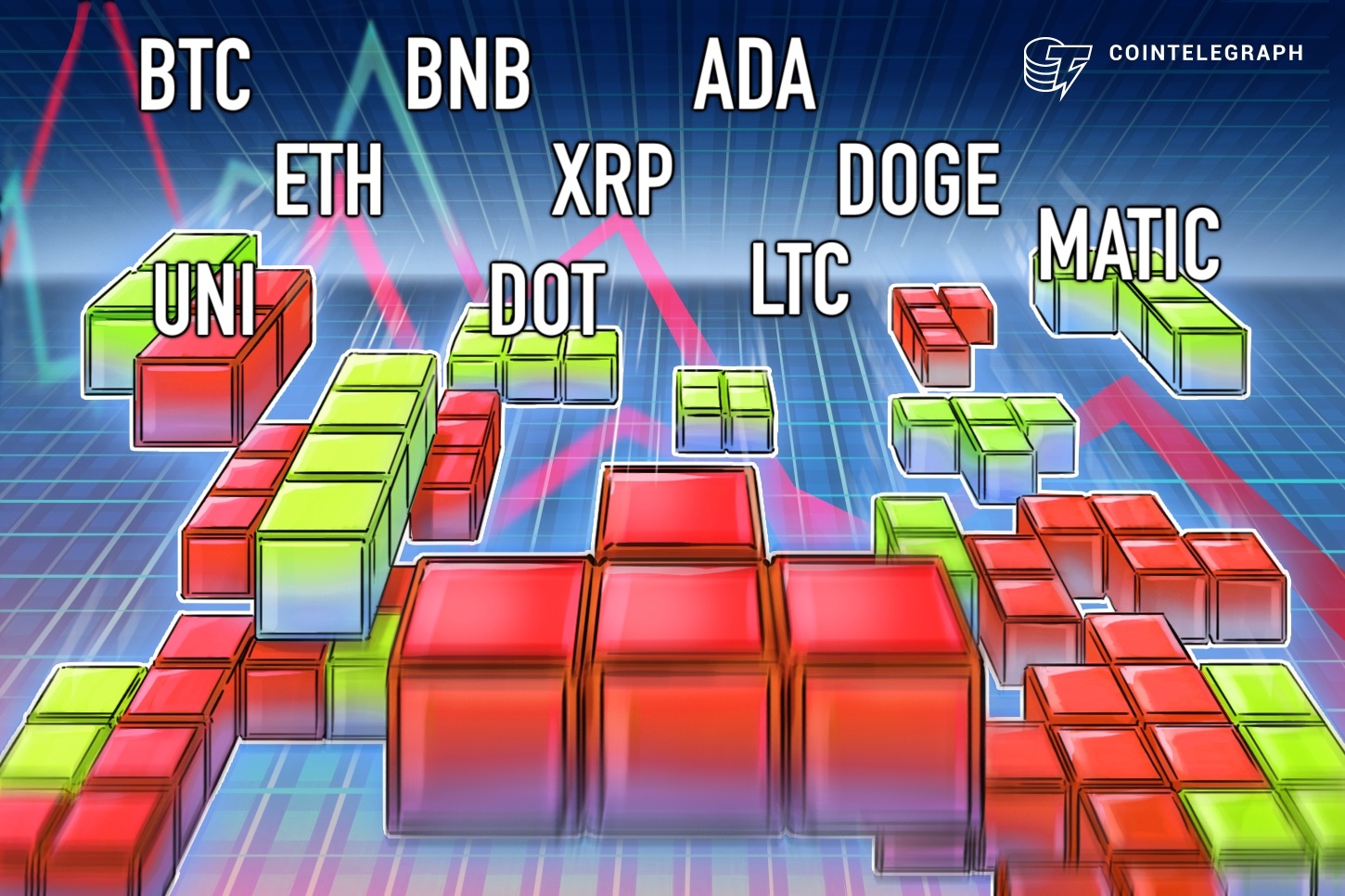 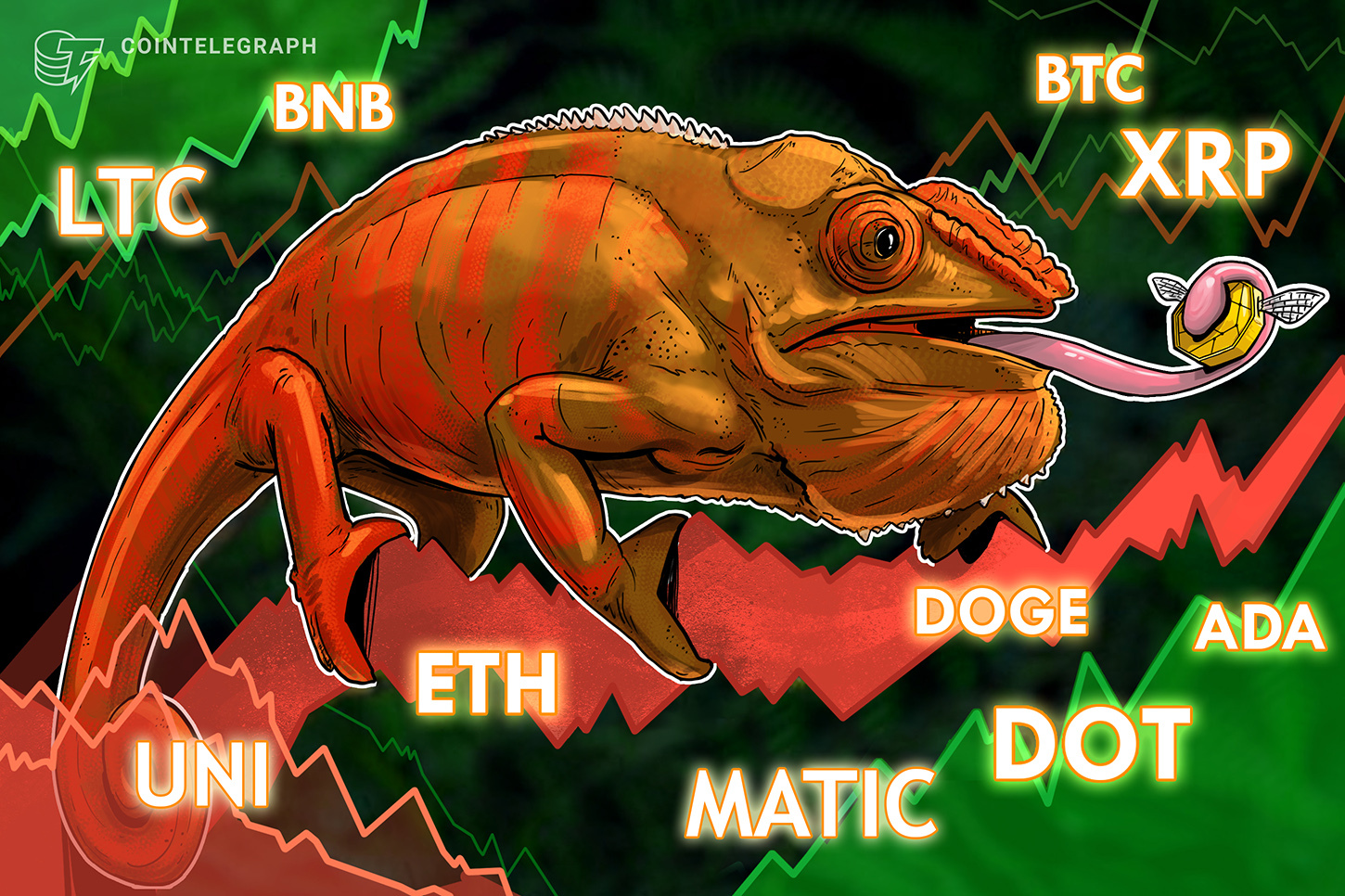 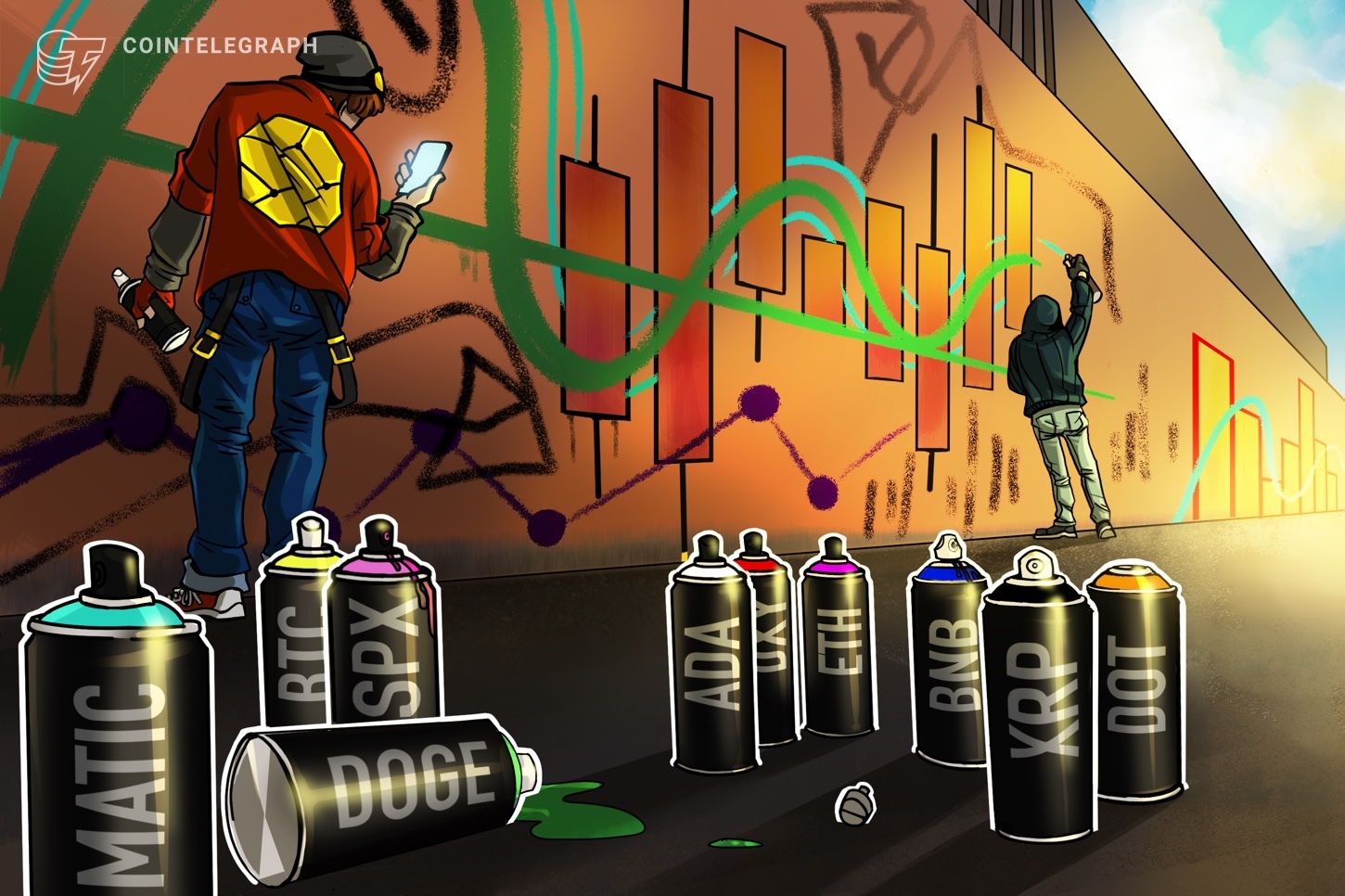