What is the Merge? What You Need to Know About the Transition to Ethereum 2.0 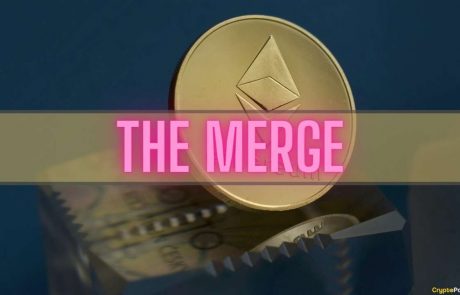 In what’s likely to be the most highly-anticipated event within the cryptocurrency community in 2022, Ethereum’s mainnet is set to merge with the Beacon Chain’s proof-of-stake system.

Called “The Merge,” it will mark the very end of the proof-of-work Ethereum we know today and give birth to Ethereum 2.0 – the version that will be based on a proof-of-stake consensus algorithm.

We have compiled a very detailed guide on everything you need to know about Ethereum 2.0 that you can check out here. The following focuses on the details surrounding the Merge, some brief technicalities, timelines, and also debunking some of the most coming misconceptions.

What is The Merge?

As mentioned above, “The Merge” is a term, a crypto slang, if you will, that’s used to describe the transition of Ethereum from a proof-of-work consensus algorithm to one that uses proof-of-stake.

The Ethereum Foundation gives an exact definition of the term:

“The Merge represents the joining of the existing execution layer of Ethereum (the mainnet we use today) with its new proof-of-stake consensus layer – the Beacon Chain.”Source: Ethereum.org

This is designed to take care of the energy-intensive mining process while also securing the network using staked ETH. The move is expected to provide for more security, sustainability, and scalability to Ethereum’s network.

To shed some more clarity and understanding, let’s dive a bit deeper into the technical side.

The Beacon Chain is the cornerstone of Ethereum 2.0’s architecture. It exists as a separate blockchain to Ethereum’s network, and it runs in parallel. It hasn’t been processing any transactions on the mainnet, but it has been reaching consensus on its own. This happens by agreeing on active validators and their account balances.

The Beacon Chain is secured by a proof-of-stake consensus algorithm, unlike Ethereum’s mainnet, which still runs on proof-of-work. It was created on December 1st, 2020.

Put in simple words, the Beacon Chain has so far worked as a de-facto testnet for Ethereum 2.0, but all that is about to change with the Merge.

As seen in the above diagram, The Merge represents the moment where the two systems (Ethereum’s current mainnet running on PoW and the Beacon Chain running on PoS) come together. This will see the PoW consensus algorithm replaced by proof-of-stake – permanently.

This carries some significant implications for the network, but the critical considerations include:

When is the Merge?

It’s worth noting that Ethereum 2.0 has been in the making for years, with the exact date of “The Merge” always looking like something set to happen in the not-so-clear distant future.

All this came to an end on July 14th, 2022, when a member of the Ethereum Foundation shared a timesheet with what was later described as a “soft” schedule for the Merge. 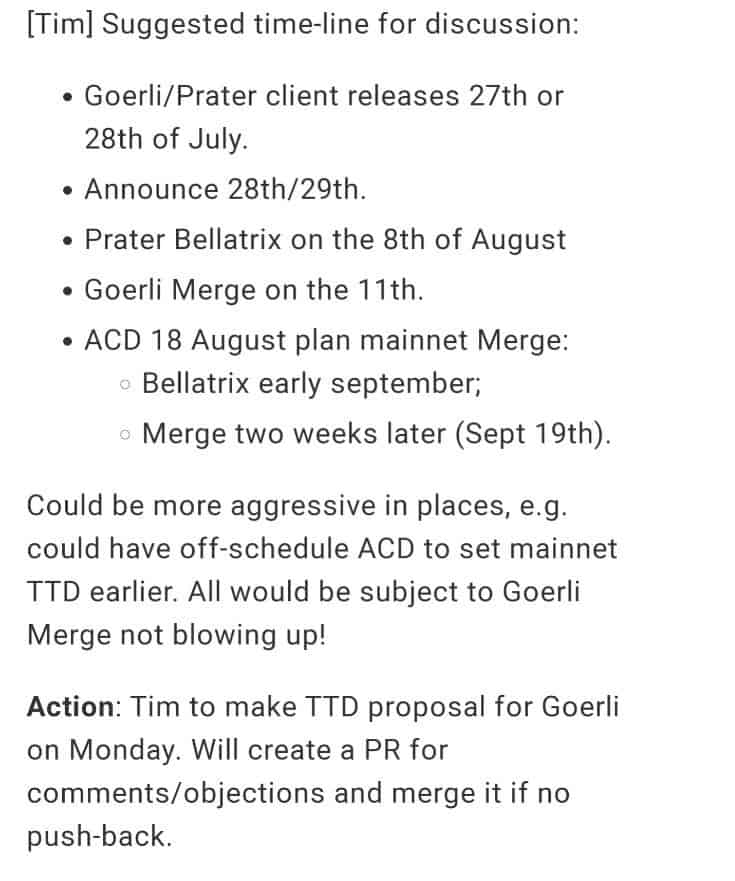 As seen in the image above, The Merge is scheduled to take place on September 19th, 2022, barring any unforeseen events, including “the Goerli Merge not blowing up.”

Nevertheless, this date is not set in stone, and there might be delays if complications come up.

How to Prepare for The Merge?

This is one of the biggest events in the history of the entire cryptocurrency industry, and as such, it is likely that many bad actors will try to exploit it and scam innocent people out of their money.

This is why it’s imperative to know that users and holders of ETH don’t need to do anything with their funds or with their wallets before the Merge.

The entire history of Ethereum – dating back to its genesis – will remain unaltered and intact after the transition to PoS. All funds held in a wallet will still be accessible after the Merge, and there is no action required to upgrade on behalf of users and holders.

The most important actions to do if you’re operating a staking node are to first run a consensus layer client and an execution layer. You should authenticate both layers with a shared JWT secret so that they can communicate securely. You should also set a fee recipient address to receive the transaction fee tips you’d get.

The key actions here are to install a consensus layer client aside from the execution layer client. Once again, you should authenticate both clients with a shared JWT secret so that they can communicate with one another secretly.

The Merge will introduce serious structural changes to Ethereum, and developers are encouraged to look at Ethereum Foundation member Tim Beiko’s breakdown of How The Merge Impacts Ethereum’s Application Layer.

Additional information on the above can be found here.

Ethereum After the Merge

One of the promises of Ethereum 2.0 is that of scaling, and Vitalik Buterin claimed that the network will be able to process 100,000 transactions per second. However, The Merge is just the first stage of five from the protocol’s incoming development. 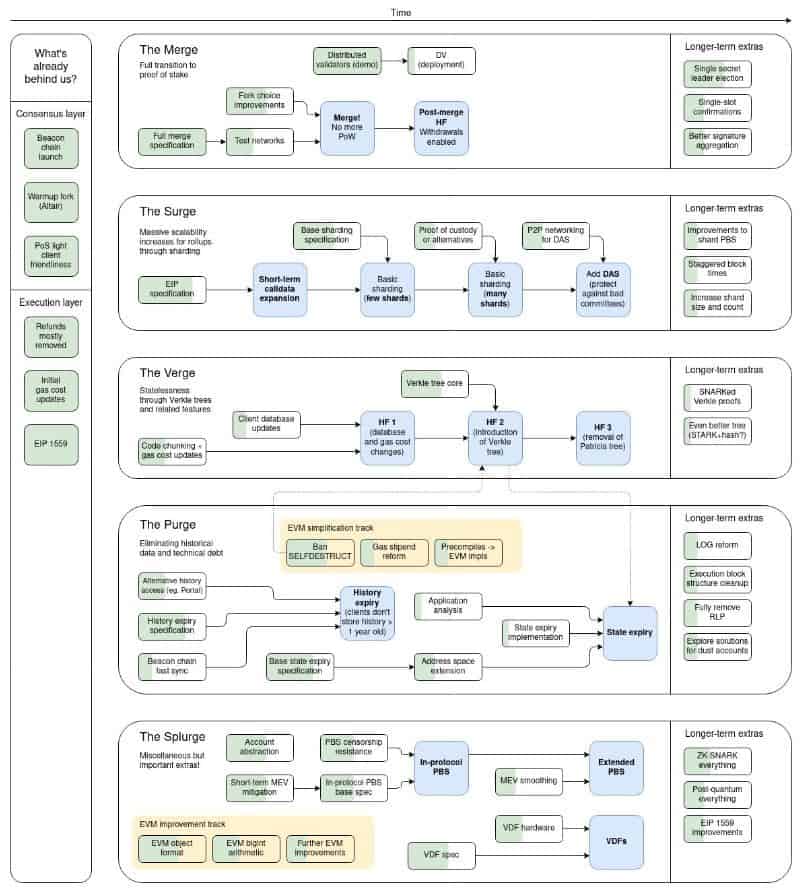 The five stages are as follows:

This is the hereby discussed transition from Proof of Work to Proof of Stake following the merge of Ethereum’s current mainnet with the Beacon Chain.

This is the phase that will bring sharding to the protocol. It’s a scaling solution that would break the network into separate partitions called “shards,” designed to spread the computational load on the mainnet.

This phase refers to the introduction of the so-called “verkle trees.” It involves an upgrade to Merkle proofs and is intended to optimize data storage for Ethereum nodes.

This is the last upgrade in the pipeline and is intended to deliver a string of miscellaneous updates that are made to ensure the overall smoothness of how the network runs.

Top 5 Misconceptions About The Merge

As it is with all highly-anticipated and big events, there are plenty of misconceptions running rampant within the cryptocurrency community. Here are five of the most common one.

It requires staking 32 ETH to run a node.

There are two types of nodes on the Ethereum network – one that can propose blocks and one that can’t. Those that are not required to commit ETH do not propose blocks but they are also integral to the network’s security because they hold all block proposers accountable.

Gas fees will fall down after the Merge.

The Merge will change the overall consensus algorithm and will not expand the network capacity – this is why it won’t result in lower gas fees. However, there are scaling solutions in development that are designed to do just that, most of which are targeted at layer 2s.

The transaction speed on the mainnet will remain relatively the same even after the merge, although there are some slight changes.

The Merge will result in overall network downtime.

The Merge upgrade is designed in a way where there will be zero downtime. The network should keep functioning as intended at all times.

All staked ETH will be withdrawn after the Merge.

Validators exiting the network are rate limited. This is done out of security reasons. There are limitations set in place that allow for roughly 43,200 ETH to exit per day. There’s more than 13 million ETH staked at the time of this writing.

All in all, The Merge is without a doubt one of the most considerable moments in the history of cryptocurrencies as one of the largest protocols will go through a monumental change. All of this became largely exacerbated now that there’s a timeline in place, albeit “soft.” 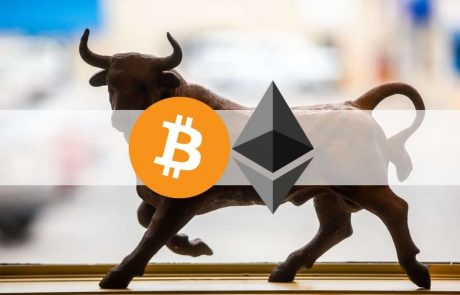 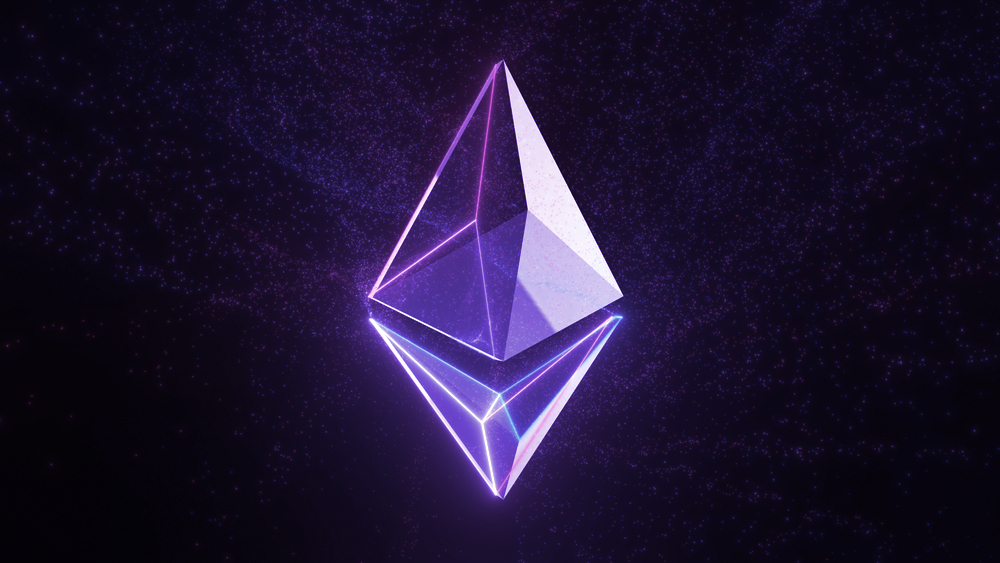