In a recent video, the DataDash host informed his 515,000 YouTube subscribers that he believes the leading cryptocurrency will see another breakdown before reaching a strong support level between $12,000 to $14,000.

“Is there going to be another sell-off? … Will there be one last price drop before we set our sights on a possibly more reliable fundamental channel around $12,000 to $14,000 for Bitcoin? Is it really that bizarre to imagine it might happen? 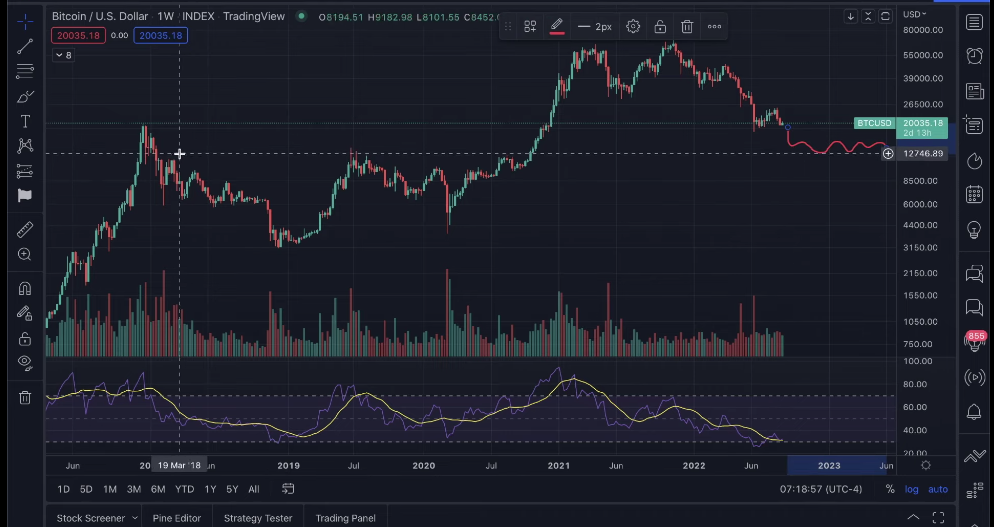 Is The Bear Market Likely To Continue For Much Longer?

In his video, Merten refers to the net unrealized profit and loss (NUPL) measure, an on-chain indicator that effectively depicts whether Bitcoin owners are making money or losing money. The technical analysis reveals that the Investors are more likely to be in profit than in loss when the NUPL is over zero. Below zero, investors are suffering losses more than they are profiting.

The decrease in Bitcoin’s NUPL, according to him, hasn’t been sustained long enough for it to be safe to say that it is gone.

As per his technical analysis, when it reaches bull market highs, the NUPL model reads between 0.7 and 0.75, which are signs of extreme overbuying, and then it begins to chart into negative territory, where the price is lower than the typical price of most Bitcoin which was transferred at on-chain.

He continued by saying that once the price hits this blue range, which occurred briefly in June, it tends to stay here for some time during typical bear markets.

Since BTC has never traded during a time of monetary tightening and interest rate hikes, the expert believes that BTC may be entering unknown territory. He also expresses skepticism that the Federal Reserve would return to quantitative easing in the near future as it has done so in the past.