Ethereum price came close to shattering key barrier $4,400 at the end of last week but its steam fizzled out. ETH withdrawals from exchanges have been relatively low since May and might hamper the uptrend.

Ethereum price tried to recover on November 18 and 19 as bulls tried to recover last week’s losses, bounding off the $4,000 support wall. However, the ETH recovery was rejected by the $4,400 supply zone. This resistance level may curtail any efforts to push the price of the smart contracts token higher, given the correction towards $4,100.

Ethereum Withdrawals From Exchanges Has Been on the Decline

Ether exchange withdrawals have been decreasing particularly after a sharp drop in May, based on on-chain data from Glassnode. According to this data, the amount of ETH leaving exchanges has grown exponentially during the first five months of the year. However, this metric fell sharply in May has remained below 55,750 since then. 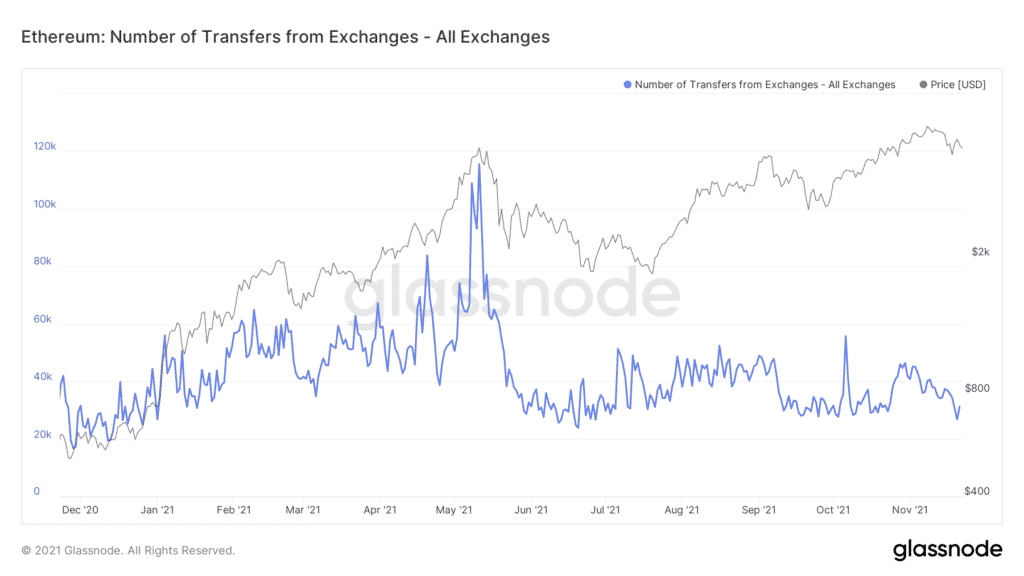 The chart above illustrates the latest drop, indicating that selling pressure might increase as the year comes to an end. Reducing exchange withdrawals is a suggestion that investors’ confidence in Ethereum’s ability to sustain the uptrend is dwindling. Thus, speculation for gains to higher levels could go down by a big margin.

Ethereum Price May Fall Towards The $4,000 Level

After being rejected by the $4,400 resistance level, Ethereum price has continued to battle increasing pressure. ETH has been forced to retest the $4,100 support zone in the wake of impending losses towards the demand area marked by the green band on the daily chart.

The position of the Relative Strength Index (RSI) at 43.16 and the entry of the Movign Average Convergence Divergence (MACD) indicator into the negative region, perhaps not easy to ignore. These two are bearish signals that suggest that Ethereum is likely to continue the downtrend, until the signals flip in favour of the bulls.

On the upside, Ethereum might head for an upward movement if bulls push ETH above the $4,400 supply zone indicated by the red band on the daily chart.

Note that Ethereum price may hit all-time high (ATH) above $6,500 in the near future as many analysts believe.