Compared to Ethereum’s 8% drop to $1,100, Bitcoin’s ongoing decrease and breach of $16,000 was more disastrous. As investor confidence continues to decline, the market’s volatility is likely to remain unsteady and unpredictable.

The market capitalization of all cryptocurrencies fell 5% the previous day, to now trade at $795 billion. In addition, trade volume rose 68% to $55.80 billion.

Amidst all the speculation, a new trend for BTC is expected to emerge, according to the cryptocurrency analyst who correctly predicted the conclusion of the Bitcoin bull market last year.

The anonymous analyst known as “Pentoshi” has shared his prediction that Bitcoin’s price is nearing the bottom.

Contrary to Pentoshi’s forecasts, the bottom of the Bitcoin market does not automatically herald the beginning of a new bull cycle.

According to his analysis, the time aspect of the BTC bottom may be close, but not necessarily just around the corner. The most valuable resource right now is time. Therefore probably BTC will spend a lot of it sideways, according to how the situation is playing out right now. 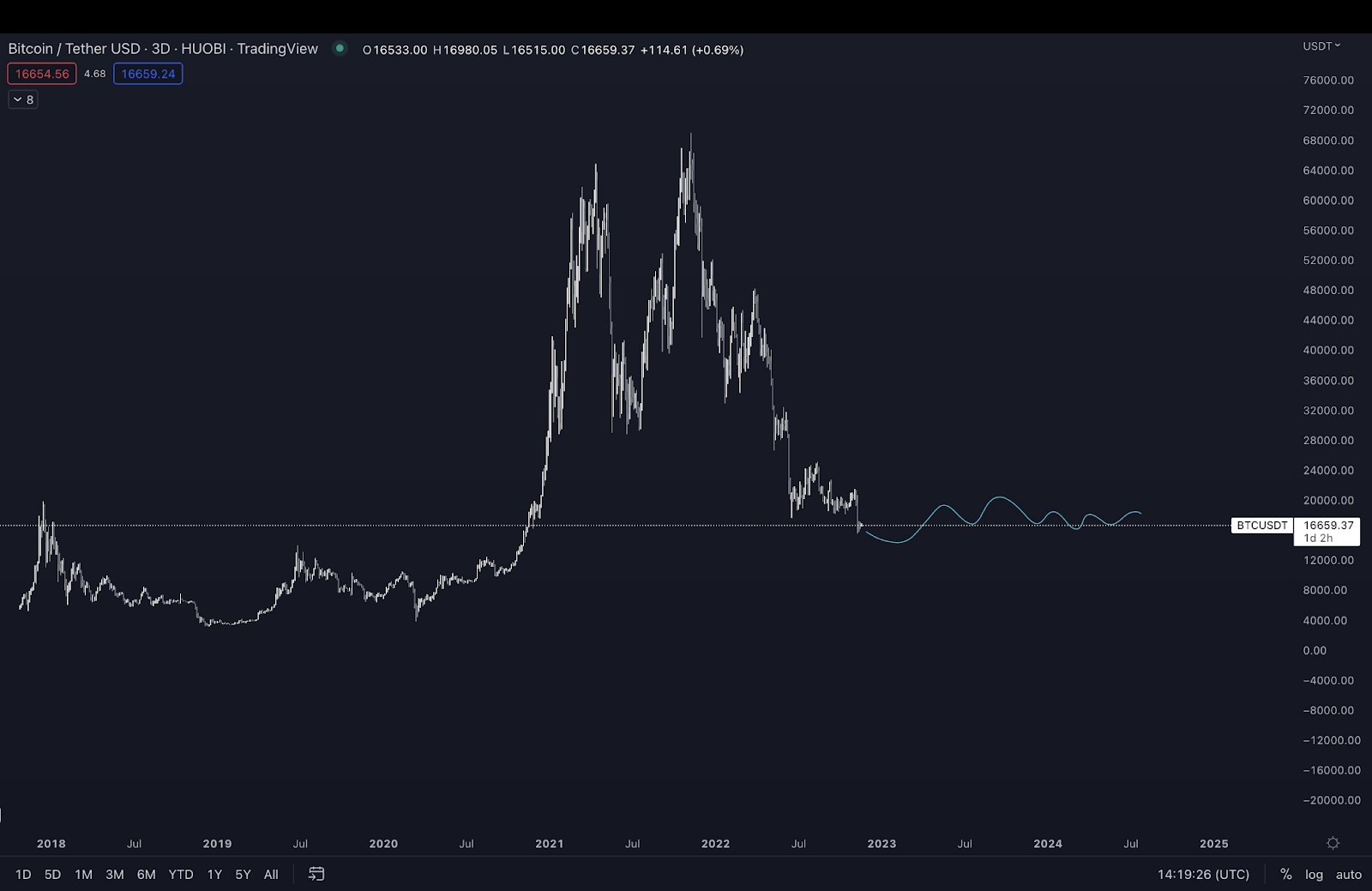 As per Santiment’s charts, one can see slight selling pressure over the last 24 hours, indicating that the downside could be retested overnight.

#Bitcoin dropped below $15.8k for the first time in 2 years, and address activity spiked to its highest level in over 6 months. #FUD due to lack of trust in exchanges historically benefits the patient, as we see $BTC continue moving into self custody. — Santiment (@santimentfeed) November 21, 2022

When looking at Pentoshi’s chart, it appears as if he is predicting the end of Bitcoin’s year-long downtrend because he sees BTC hedging sideways in the coming months.

In light of the fact that selling pressure may persist, Bitcoin’s price action is expected to attempt a temporary dive below $16,500. After that happens, next week could see more efforts to break the upper consolidation barrier above $17,000.

The crypto expert bases his forecast on the fact that the factors that stoked the previous Bitcoin bull market are no longer present.

Further, he added some ground-breaking questions to his viewers, he said

To what extent may the last bull market be attributed to the preexisting conditions? Is it still that way or will it be that way again?

The answer lies in the microeconomic factors as the world is in a chokehold, thanks to the Federal Reserve’s $120 billion in monthly accommodation, as well as a stimulus, quantitative easing, negative or zero interest rates, “loans” from the Wage Earner Protection Program, and other measures.

What to expect over the next few weeks?

There isn’t much evidence to support the notion that the bottom is close to weekly, despite the fact that it is common to call bottoms on a weekly basis. It only requires looking at the price axis, which is $69,000 to $16,000, to recognize that the market is getting near the bottom.

To be more specific, Pentoshi claims that developments in the macro backdrop will apparently dictate how long Bitcoin consolidates.

To conclude, Pentoshi said that changes in the state of the global economy are the things that might prompt a shift more quickly. If that occurs, purchasing at the bottom doesn’t really matter since you have time and price on your side because such trends can last years.

Currently, Bitcoin is down more than 3% on the day and trading at $16,185 at the time of writing.