Polkadot’s native cryptocurrency DOT registered a 5-day recovery after kicking off April on the back of a strong bearish pullback. However, its price action, at press time, was approaching a previously tested resistance zone underpinned by a Fibonacci retracement.

DOT bears recently went on a recess after bottoming out at $16.73 on 11 April, before embarking on an overall bullish performance. In fact, it is up by roughly 10% since Monday, trading at $18.37 at the time of writing.

However, that recovery might be cut short by strong resistance near the $18.73-price level.

The 0.5 Fibonacci retracement line falls directly on the upcoming $18.73-resistance level. The probability of DOT encountering resistance at that level will be great thanks to previous support and resistance retests over the last 3 months.

If expectations holds true, then there might be another potential pullback. Such an outcome would also likely lead to support near the 0.618 Fibonacci level, a level which coincides with the $17.64-price level. Evaluating its latest performance may also help us determine where the price is heading.

What can on-chain metrics tell us?

DOT’s latest pullback did not have enough momentum to pull it to its sub-$16 lows. Its on-chain volume seemed to highlight a hike from 10 April, a day before the cryptocurrency commenced its latest rally. It was followed by an uptick in the supply held by whales from around 51.87% to 52.04%.

This coincided with the hike in volume and buying pressure, resulting in the uptick over the last few days.

DOT’s on-chain volume metric shows reduced volume after the 11-12 April volume increase. Although it has tapered down, it is still above the recent low and might support the retracement at the upcoming Fibonacci level. A slight drop in percentage held by whales backs the expectation. In fact, it is still notably higher than it was prior to last week’s price uptick.

The supply held by whales and volume metrics align with the probability of a pullback because they indicate reduced buying pressure. However, the fact that they have not dipped to their March lows suggests that the price might not drop to those levels in the short-term. 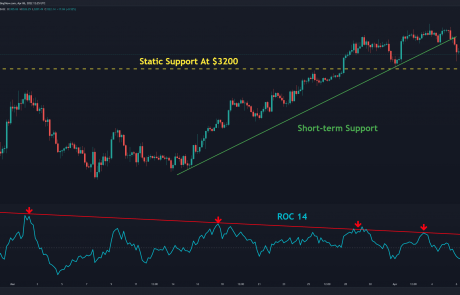 Following a 5% Daily Crash, Here’s the Next Support for Bitcoin (Price Analysis) Bitcoin Cash rallies over 11% rally in a day, but here’s why bulls should be wary