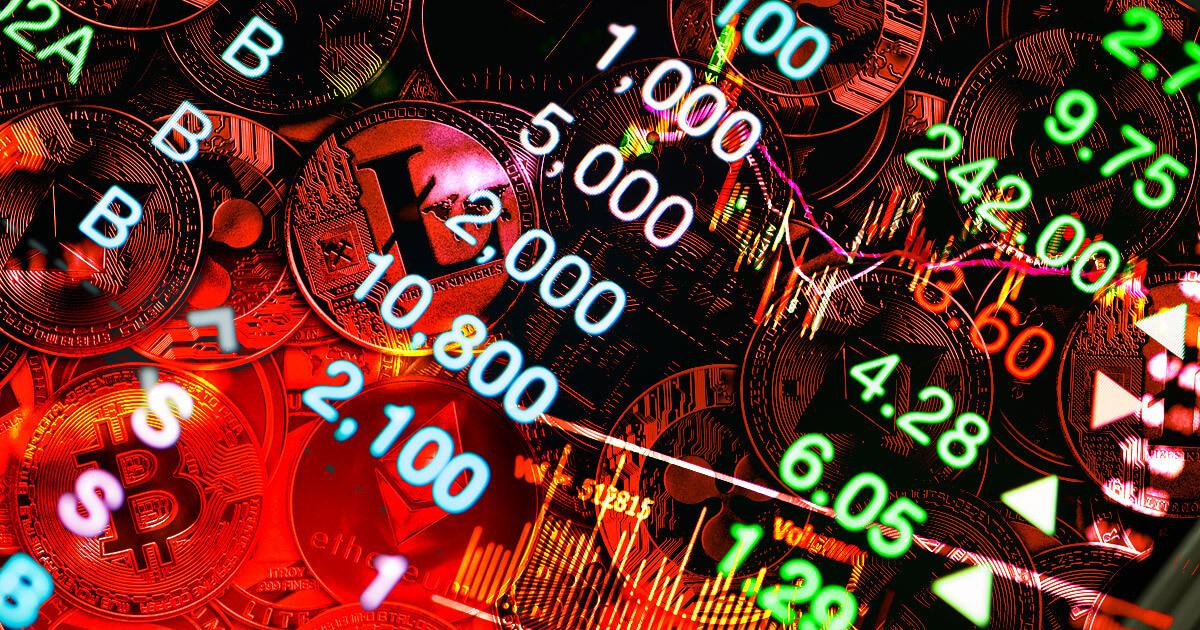 Following on from one of the craziest days in crypto history on Nov. 9, the 24/7 crypto markets keep investors busy. Binance released its proof-of-reserves, FTX’s stablecoin balance nears zero, the Curve 3pool became concentrated with USDT, and 60,000 BTC left Binance. Rumors are brewing of an Alameda Research short position on Tether USDT as it potentially looks for a last-ditch lifeline.

Binance released the proof-of-assets information that CZ had promised following the impending collapse of FTX. In a more intended to buoy the markets and inject trust into the exchange after it was revealed that FTX had a hole in its balance sheet of $8 billion and no way to process client withdrawals, Binance published a new page of its website entitled “Proof of Assets.” 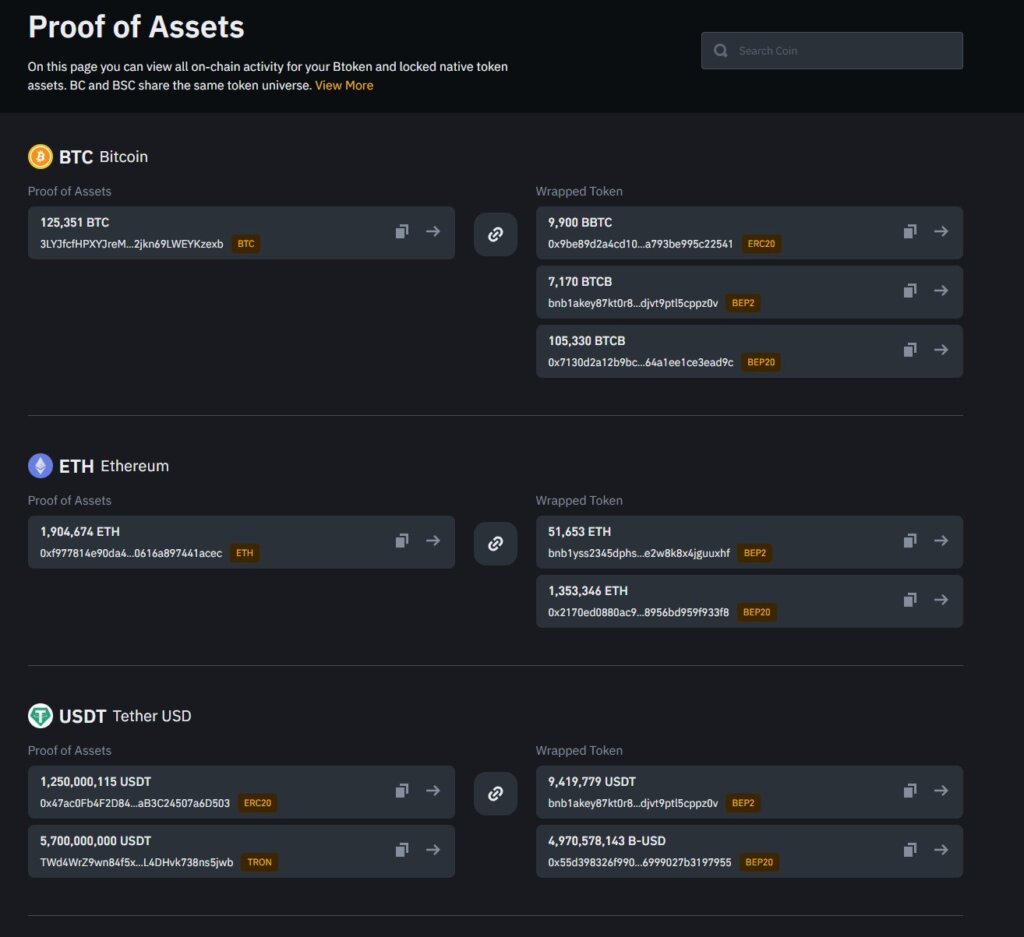 Binance outlined all of its asset holdings, and the exchange included all the on-chain addresses for each token along with a link to show the correlation with bridged assets on other chains. The ability to open the blockchain explorer for each network and view the data on-chain showcases the power and ability of exchanges to be fully transparent.

The level of transparency shown by Binance is second to none and gives investors confidence that there is no trust required. Following claims from exchange leaders at Celsius, Voyager, and now FTX that their assets were fully backed up until the point where the companies announced insolvency, the trustless approach to transparency by Binance is to be applauded.

Some notable holdings are listed below:

The total value of the above assets is around $18.3 billion. However, there are 385 tokens across the entire exchange, so a full breakdown of all assets would be required to give an accurate figure on the total holdings.

One token that has seen increased inflows to Binance over the past few days is Binance USD (BUSD), which is the only stablecoin to see an increase in deposits. The aggregate supply of all stablecoins on Binance nears $26 billion. The chart below shows the net inflow of BUSD onto Binance in contrast with other stablecoins. 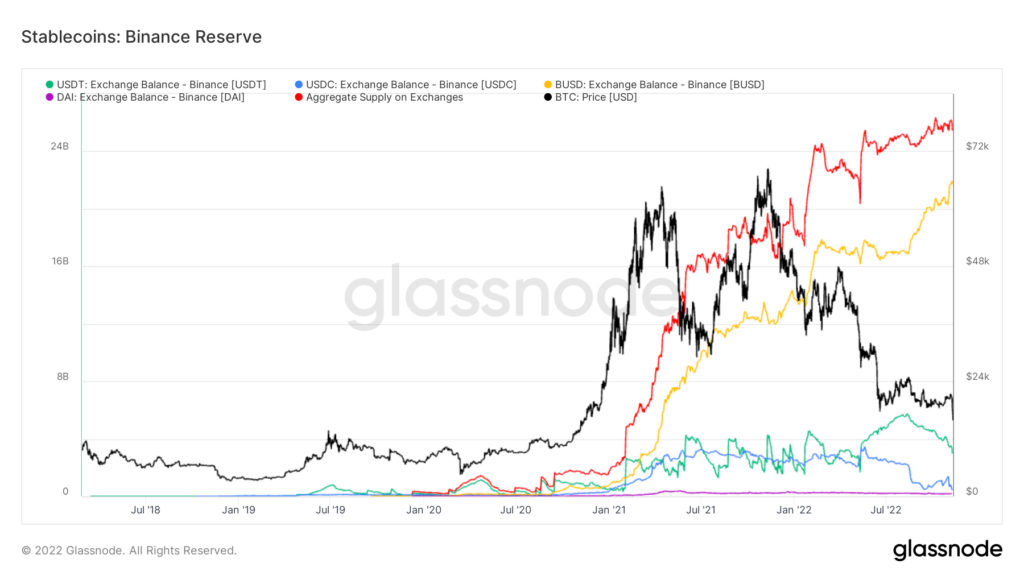 The insolvent FTX has a very different story of its stablecoin balances as BUSD, USDC, USDT, and DAI are all near zero as tokens were withdrawn from the platform. Withdrawals are currently closed on the exchange, and new user accounts cannot be created. 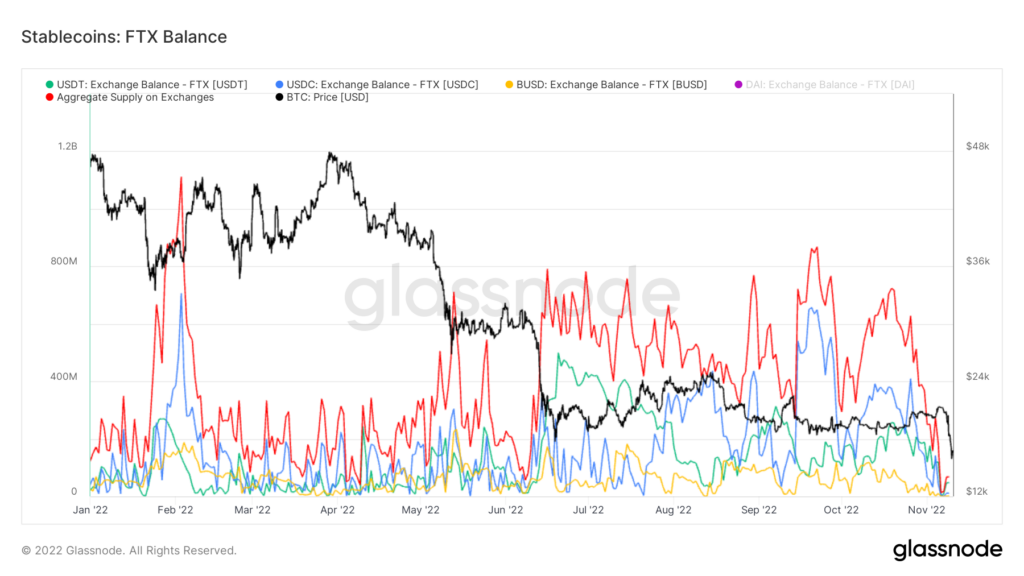 Bitcoin is down 77% from its ATH

The need for increased transparency by Binance during this period of high volatility has also been reflected in the price of Bitcoin. The leading cryptocurrency by market cap is down 77% from its all-time high in its fourth most significant drawdown of all time as it falls below levels reached during the Terra Luna collapse of May this year. 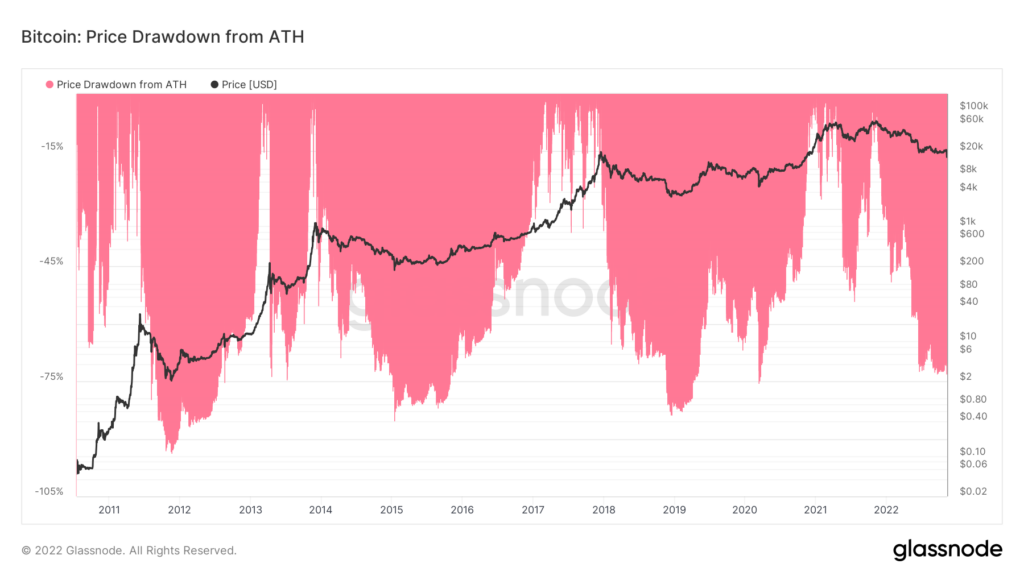 Ethereum is now 77.3% down from its all-time high, which marks its fourth most significant drawdown ever. 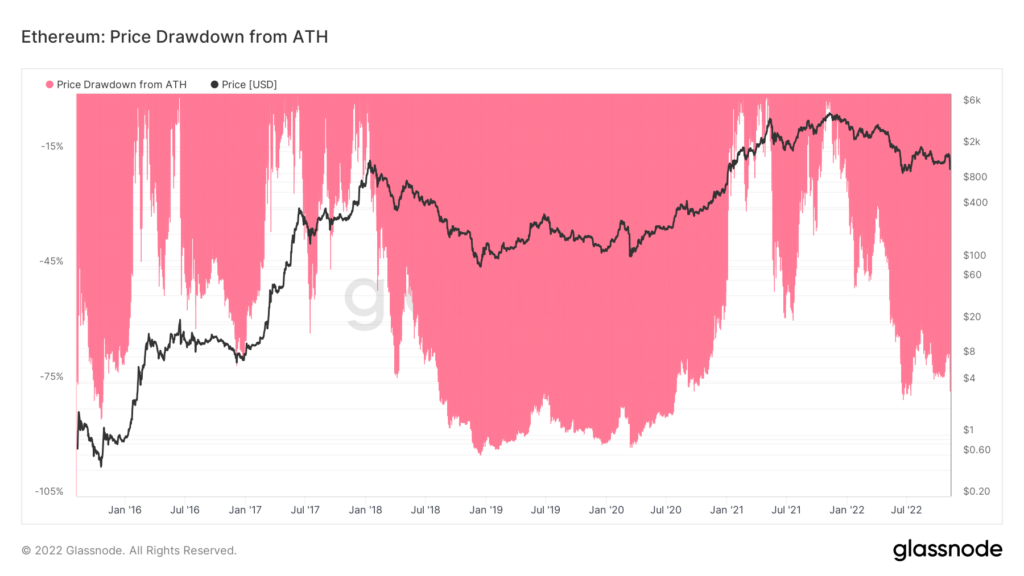 The resulting downward pressure of the price of Bitcoin puts it on course for the first time in its history to be down in all four quarters of the year. 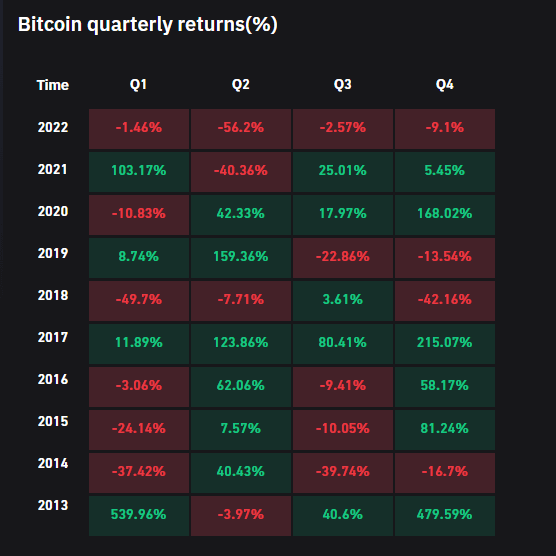 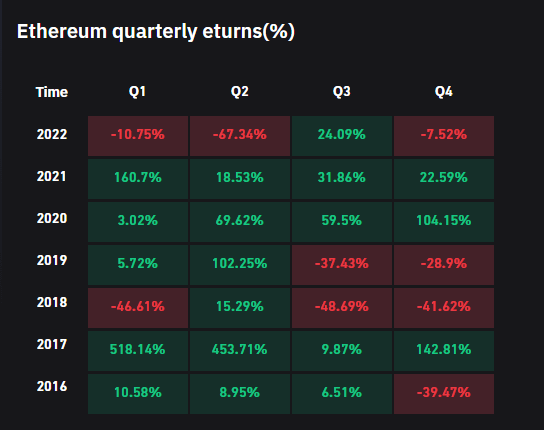 While the fallout from FTX’s collapse has rocked major tokens, the DeFi industry is now showing signs of stress. For example, the Curve 3pool has become 84% concentrated on USDT as DAI and USDC balances fell below 8% each. A significant imbalance could lead to liquidity issues as users attempt to withdraw funds in different denominations than those used to deposit.

This literally made me say “holy fucking shit” out loud 3 times in a row. — DIRTY BUBBLE MEDIA: FISH IN A BARREL (@MikeBurgersburg) November 10, 2022

Twitter user astromagic identified a trade for $250k made by Alameda to swap USDT to USDC. The trade appears to be a part of a larger strategy to short USDT to the tune of several hundred thousand Dollars. While the figure may seem inconsequential given the size of the crypto industry, it begs the question of why Alameda is making such a trade at this time.

The stablecoins were used as collateral to borrow more USDT and then sell those borrowed funds back into USDC, making an on-chain net sell of around $550k USDT.

What you are seeing below is an Alameda wallet deposit of $300k USDC into @AaveAave – Borrow $250k $USDT and then instantly sell it back to $USDCThis is technically an on-chain short of USDT, nothing significant but wtf is going on here? — blocmates. Behind on DMs apologies (@blocmatesdotcom) November 10, 2022

The fear, uncertainty, and doubt within the crypto industry is rising as users look to find safer grounds and avoid any potential contagion. For example, following the collapse of Terra Luna earlier in the year, Voyager, BlockFi, and Celsius all ran into immediate liquidity issues. In addition, FTX, Alameda Research, and FTX Ventures have incredibly close ties, and their investments significantly contribute to the crypto industry. As a result, contagion within other projects is highly possible.

On Nov. 9, 60,000 BTC left exchanges, with the majority coming from Binance as users withdrew coins. The chart below shows the amount of BTC that went to Binance over the past seven days. However, the data from Glassnode indicates that Binance still has over 600,000 BTC in its custody which is substantially more than presented in its proof of assets report. 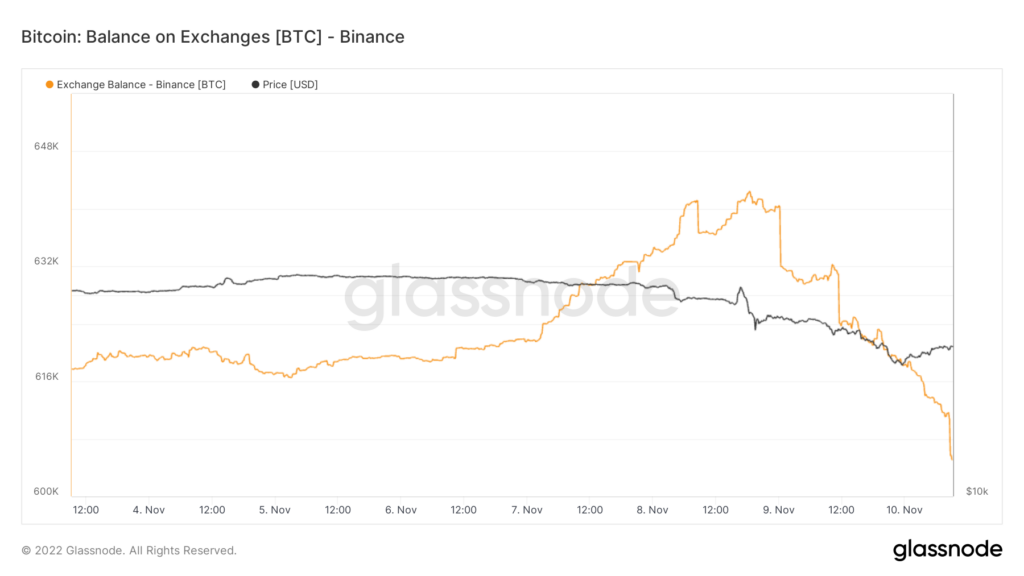 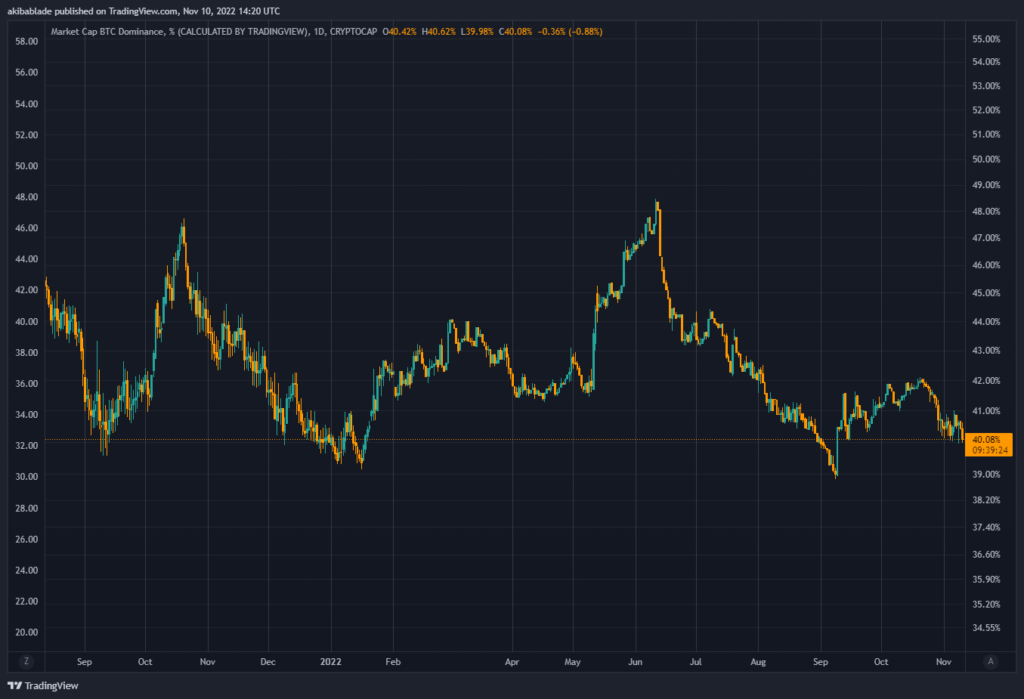