CEO of BitMex is Very Bullish On Ethereum, Says ETH Price to Hit $5000 on Merger Arthur Hayes, the CEO of a popular cryptocurrency exchange BitMex has set a bullish target for Ethereum price ahead of the Merger. The founder in his blog post said that the second largest crypto may hit $5000 based on triple halving.

“I believe this is a conservative estimate because the structural changes to the demand/supply dynamic quill never are fully priced in a priori–just like how the Bitcoin halvings continuously produce positive returns, even though we know well in advance when they will occur,”

The above estimate is based on the Fed Pivot which he believes has occurred on 27 July 2022, while the Merger is scheduled in September. The founder further believes that the merger may make huge noise as the miners have already started making a move.

While Arthur’s bet on ETH price without a Fed Pivot remains bullish with the price target of around $3562 which is again based on Bitcoin’s percentage gains after the halving. Moreover, the founder is concentrating his bets more on Ethereum rather than diversifying his investment.

The Ethereum price appears to be pretty bullish in all the time horizons as the asset is on the foothill of a massive explosion. The asset is consolidating heavily along the immediate resistance levels and waiting for a chance to slice through the resistance zone. 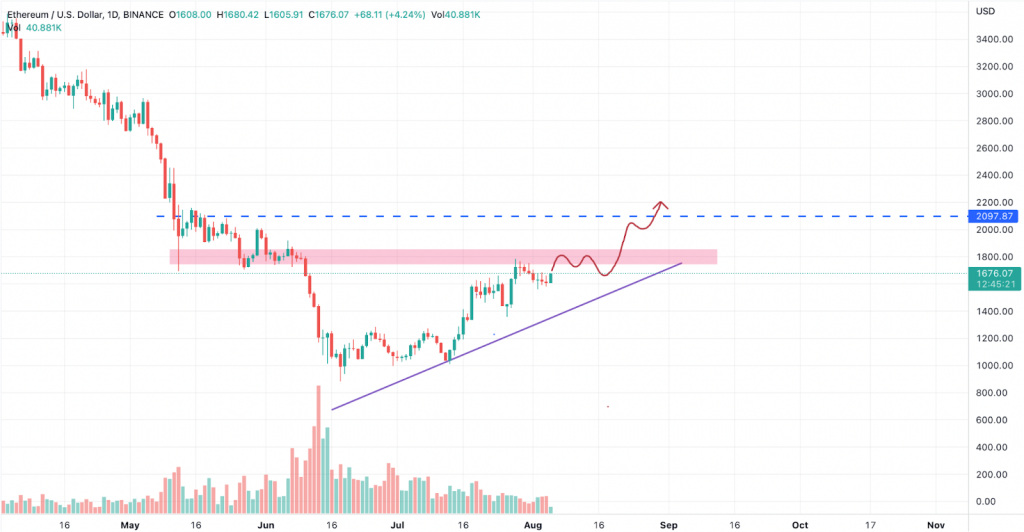 As mentioned in the above chart, the ETH price is swinging within an ascending triangle but pretty far from the apex. Therefore, the asset is expected to consolidate within the narrow range for some more time and as the merger approaches, the asset may break above the consolidation and hit $2000 initially.

Ethereum Price at the Foothill of Massive Explosion! ETH Price Seems to be Poised to Hit $8000 Soon