Cardano Price Prediction: Will ADA Price Surge To Hit $5 This 2022?

The Cardano network is now crowned as one of the most scalable systems, in the world economic forum. The network has seen itself evolving to be the first peer-reviewed and astoundingly scalable chain. The platform depends on the Proof-of-Stake (PoS) mechanism, which helps it triumph over its rivals. This is done by bypassing persistent sustainability debates.

Cardano is now establishing its reign in utility at an impeccable rate. As more dApps queue up to run on the network. Wherefore, the quest to drive the price trajectories continues to grow louder. Dive in as we bring to you the plausible Cardano price prediction for 2022 and beyond.

ADA price had been fairly under the influence of the market trends, since the start of 2022. The price fell about 45% between the 20th and 22nd of January. While the price did climb to $1.12 on February 5th. Howbeit, the fear around global tensities led to ADA falling below $1. Following a climb to $1.26 by the 5th of April, the altcoin slipped down to $0.748 by the end of the month. As the downtrend further aggravated, the altcoin is now sticking closer to its support levels at $0.5. 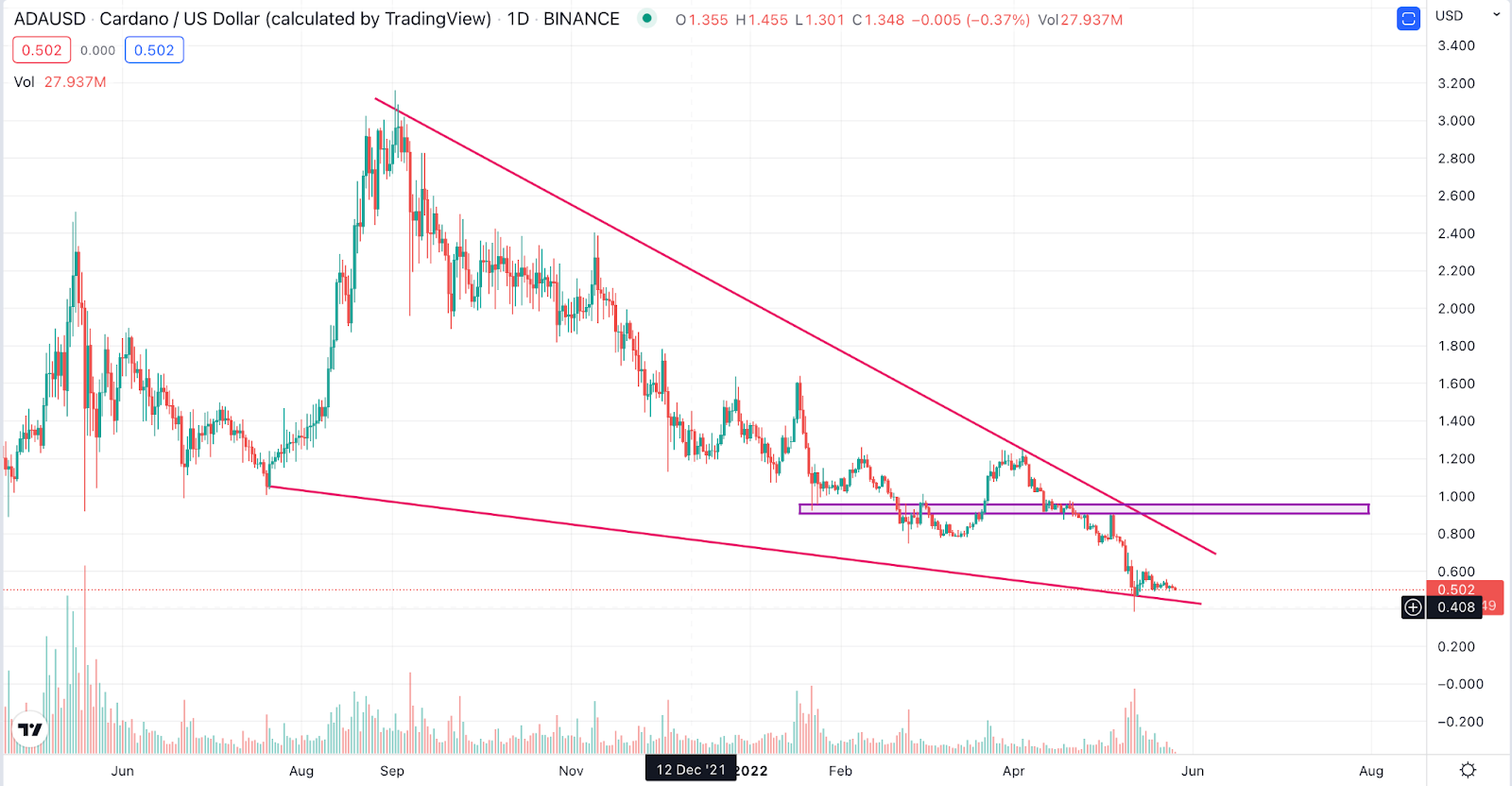 As seen on the daily chart, ADA has been ranging in a falling wedge pattern. Seeking impetus from volumes, the altcoin could brush levels around $0.756. Whilst being on its way for a breakout of the pattern. A bullish move above which could take the price to $0.959 in view of the Vasil Hardfork. Failing to gather steam, the altcoin could range sideways around the said levels. That said, an increase in selling pressures, amidst a possible buy the rumor sell the news could plunge the price to $0.756.

Get All the Latest Updates and Price Analysis of Cardano

The successful implementation of the Vasil Hard Fork, rollout of other developmental upgrades and growing on-chain activity could be imperative for ADA. If materialized, the price could surge to its quarterly high of $1.05. Conversely, failing to garner the interests of investors, the price could slump down to $0.657. Successively, linear price propulsion will take the price to $0.848.

Growing adoptions, utility, and major collaborations could push the price of ADA to greater heights. Moreover, the foray into NFTs could help the ADA price reach a maximum of $1.05. On the flip side, negative criticism and ebbing volumes could drag the price down to $0.848. Considering the bullish and bearish targets, the average price could settle at $0.657.

If the scheduled upgrades roll out successfully, we can expect the ADA price to reach as high as $1.599. On the downside, if things prevail in favour of the bears’, the price of the altcoin could land at $1.014.

Price Prediction Of ADA For 2024

The growing dominance of Defis and Cardano’s hold in the sector could turn imperative for Cardano. Moreover, the escalating count of developers would help supplement the planned initiatives of the network. Wherefore, the price of ADA could propel to a maximum of $5.408 by the end of 2024.

However, if the broader market comes across a possible financial crisis or regulatory bottlenecks, the altcoin could drop to lows of $2.909.

By the end of 2025, if the protocol sees the implementation of its open voting system. The network might lose certain traders, risking the price to plunge near $5.02. However, considering improvements in bug prevention systems, the price may sail in average figures near $7.939.

If Cardano successfully flags off some projects, collaborations, and new updates in smart contracts, over time. ADA price might strike a maximum of $10.776 by the end of 2025.

Here is what some eminent websites view on Cardano’s price prediction, which will give us a fairer idea.

According to Trading Beasts’ forecast, Cardano’s price might hit a maximum of $0.877 by the end of 2022. Whilst a reversal in trends could drag the price down to $0.596. A balance in buying and selling pressures could land the price at $0.701.

Digital Coin Price expects, the altcoin to soar to a maximum of $0.71 by the end of 2022. The analysts from the firm have pinned the minimum and average closing targets for the year at $0.63 and $0.67. Digital Coin Price also holds prediction for the long term. Accordingly, the altcoin is expected to close 2025 at its potential high of $1.08.

Gov.Capital has revised its forecast for Cardano’s ADA. It now believes that the digital token could close the year with a pricier tag of $1.052. The website has set the maximum closing targets for 2023 and 2025 at $2.831 and $7.78 respectively.

Click here to read our price prediction of Ethereum (ETH)!

What is Cardano (ADA)?

The Cardano network is also crowned as the world’s first-ever peer-reviewed decentralized blockchain solution. Which boasts ADA as its native cryptocurrency that powers that protocol. It was created by ex-Ethereum co-founder Charles Hoskinson and Launched in September 2017. The altcoin has a supply limit of 45 billion tokens.

The blockchain is halved into two layers, namely the Cardano Settlement layer and Cardano Computational Layer. Whilst the CSL stimulates the peer-to-peer transactions within the network using the Ouroboros mechanism. The smart contract mechanism is taken over by the CCL layer, allowing a seamless progression in both segments.

Although Cardano uses a PoS algorithm, it uses a complex version which is labelled Ouroboros PoS. Ouroboros unlike conventional PoS creates timeslots called an epoch. Each epoch has a slot leader chosen by other nodes in the slot. These leaders carry out block creation in each epoch, and each leader gets a chance to do it. This reduces congestion and increases TPS.

If Cardano continues to focus on transiting from a developing network to a developed one. We will find the protocol building on its user base, with an influx of newer users. This could help the price of ADA to raise its bars to $1.6, by the end of 2022.

However, if negative perceptions haunt ADA’s price projection, while the network is still under development. Bears could seize the opportunity, and curb the year-end price target at levels around $1.

Cardano’s team raised more than $63M during its ICO. Over the first week since launch. ADA experienced significant growth, soaring in value and hitting a market cap of over $600M by October 1, 2017. ADA saw its listing on multiple top cryptocurrency exchanges. On November 29th, 2017, the coin skyrocketed by over 142.4% boosting its market cap to $3.5 billion.

In early January 2018, the value of the altcoin hit an all-time high of $1.162. That led to its market cap peaking at over $33bn. Woefully, the rally remained short-lived and the price fell into the bear market. The price fumed into ashes and declined drastically below $0.04, marking the end of 2018.

The first half of 2019 was bullish for Cardano (ADA). After reaching $0.05 by the 9th of January, the price declined before finding support at $0.035 on February 6th. The spike in buying pressure took the price of ADA to $0.10 on the 3rd of April.

After a slight pullback to $0.057, Cardano tried five times to break through the resistance at $0.10. On the 26th of June 2019, the ADA price hit $0.11, but selling pressure led to another downfall. The rest of the year was bearish for Cardano; it was only in December that ADA found support at the $0.03 price mark.

On a bearish note, ADA continued to trade at $0.03 during the beginning of January. With certain variations, the price rose to $0.06 in the mid of February. Later, the coin had another decline. Shockingly, the price sank to $0.02 in March, following the crypto market crash due to the Covid-19 outbreak. A steady uphill trek took ADA price to $0.15 at the end of July.

Later, the price fell yet again to $0.07 by the end of September. Further, the price managed to follow bitcoin, and dramatically hit $0.17 at the end of November. The trade of 2020 was put to an end with some variations, with a price tag of $0.17.

The beginning of 2021, was seen as bullish for Cardano, where-in the altcoin hit an all-time high of $2.4. As the Cardano Foundation publishes an infographic that suggests its ADA cryptocurrency to be ideal for Tesla. Further, When the crash in the market on May 19th, led to the price taking a substantial plunge from $2 to $1.48.

Post the turbulence, the month of August began on a bullish note. As the digital asset took a rebound back to reclaim its place on the market charts. The price hit new ATH at $3.08 with the launch of smart contracts being around the corner.

A: Cardano is still an ideal investment, with its stout developments and also considering the plethora of applications in the pipeline.

A: Cardano is one of the coins with good potential, which translates to a promising future.

A: ADA is available for trade across prominent cryptocurrency exchange platforms such as Binance, OKX, Bybit, Bitget, and CoinTiger, amongst others.