The year 2009 was a vital year for the crypto industry, as it changed the future of the fintech business forever. This is mainly because the year belonged to the primitive cryptocurrency Bitcoin. Moving forward to 2015, the year also belonged to the largest altcoin Ethereum and the chain which has been relentless with its developments- Cardano (ADA).

The cardano cardanoBlockchain Network Followers : 0 View profile network is successfully crowned as one of the most scalable systems in the world economic forum. The network has been fast progressing to be the first peer-reviewed and an impeccably scalable chain. The platform depends on the Proof-of-Stake (PoS) mechanism, which helps it conquest its rivals. This is done by bypassing persistent sustainability debates. Cardano is now establishing its reign in utility at an impeccable rate. Therefore, the quest to drive the price trajectories continues to grow louder. Dive in as we bring you the plausible price prediction of Cardano’s ADA for 2022 and beyond.

Cardano’s Vasil Hard Fork has reportedly cut down on gas fees by 50% and the translation size by 50%. The makers affirm that with the upgrade, users now get a 10X savings on space at half the expense. If this entices investors, ADA’s price could chug up to a maximum of $0.6587.

On the flip side, Cardano’s transaction volumes have been in a steady decline, while the whales holding more than 100K ADA tokens have also dropped heavily. The road ahead seems to be dark for Cardano as, an aggravating stance could conclude the year at $0.4220 .Considering the bullish and bearish targets, the average price could settle at $0.5687.

A steady incline in prominence is imperative for Cardano, as the results will eventually reflect on ADA’s price. In such an optimistic scenario, we expect the ADA price to reach as high as $1.1308. On the downside, if things prevail in favor of the bears’, the altcoin’s price could land at $0.5993. Successively, an equilibrium in the buying and selling pressures could land the average price at $0.8555.

Defis and Cardano’s growing dominance in the sector could become imperative for Cardano. Moreover, the escalating count of developers would help supplement the planned initiatives of the network- Wherefore, the price of ADA could propel to a maximum of $2.0167 by the end of 2024.

However, if the broader market comes across a possible financial crisis or regulatory bottlenecks, the altcoin could drop to $1.0416. That being said, the regular price could settle at $1.5423.

By the end of 2025, if the protocol implements its open voting system. The network might lose certain traders, risking the price to plunge near $1.8098. However, considering improvements in bug prevention systems, the price may sail in average figures near $2.6103.

If Cardano successfully flags off some projects, collaborations, and new updates in smart contracts. The ADA price might strike a maximum of $3.4952 by the end of 2025.

Suppose Cardano continues to focus on transiting from a developing network to a developed one. In that case, we will find the protocol building on its user base, with an influx of newer users. Again, this could help the price of ADA to raise its bar to $0.65 by the end of 2022.

However, if negative perceptions haunt ADA’s price projection while the network is still under development. The bears could seize the opportunity and curb the year-end price target to levels around $0.42.

What Is Cardano (ADA)?

The Cardano network is also the world’s first-ever peer-reviewed decentralized blockchain solution, which boasts ADA as its native cryptocurrency that powers that protocol. It was created by ex-Ethereum co-founder charles hoskinson charles hoskinsonceo at IOGCharles Hoskinson is an enthusiastic entrepreneur and one of the richest software developers across the globe. His creation Ethereum is touching sky heights in the crypto market. Charles resides in America and belongs to a doctor's family but decided to focus on finance over medicine due to his interest in the emerging field of crypto from the very start. Charles was regarded as the 40 Most Influential by Yahoo Finance in 2021. Began his career in 2013 as a business consultant but dropped his job and got involved in the crypto space whilst starting a project called Bitcoin education. Later, Hoskinson joined the Ethereum founding team as one of five original founders with Vitalik Buterin who held the position of chief executive at Ethereum. In 2014, Hoskinson and former Ethereum colleague Jeremy Wood formed Input Output Hong Kong(IOHK), an engineering and research company that builds cryptocurrencies and blockchains. Hoskinson along with IOHK sponsored research labs focusing on blockchain technology at the University of Edinburgh and the Tokyo Institute of Technology, in 2017. [email protected] Followers : 0 View profile and was launched in September 2017. The altcoin has a supply limit of 45 billion tokens.

Check Out Our In-depth Guide on Cardano:

Making The World Work Better For Everyone Is What Cardano Stands For. A blockchain-based platform for changemakers, innovators, and visionaries with the tools and technologies required to create possibilities for the many and bring about positive global change. It is a proof of stake platform, the first to be founded on peer-reviewed research and developed through evidence-based methods, which combines pioneering technologies to provide unparalleled security and sustainability to decentralized applications systems and societies. The company was established in 2017 and is co-founded by Charles Hoskinson, and is located in Zug, Switzerland. The Switzerland-based protocol aims to solve problems related to scalability, interoperability, and sustainability on the cryptocurrency platform. With a decentralized team of three independent entities that work to ensure that Cardano stays true to its purpose as it advances and evolves. The firm is partnered with some reputed companies, such as INPUT/OUTPUT, EMURGO, and many more. Cardano brings a new standard in technology that is open and inclusive to challenge the old and activate a new age of sustainable, globally distributed innovation. It exists to redistribute power from unaccountable structures to the margins, to individuals, and to be an enabling force for positive change and progress. The protocol is the culmination of tireless effort, building on foundational research, and is propelled by a vision for more secure and transparent global payments systems and a means to redistribute power and control more fairly. The company, according to recent reports, has significantly improved its consensus layer pipelling, which would completely alter the logic of Cardano's transaction propagation. The platform just published an open-source Cardano Web3 Decentralized Applications Tool Stack in the month of June 2022. Exchanges AdaSwap, ADA Finance, DOEX, and Cardax all were created by Cardano.

The blockchain is halved into two layers, namely the Cardano Settlement layer and Cardano Computational Layer. The CSL stimulates the peer-to-peer transactions within the network using the Ouroboros mechanism, and the smart contract mechanism is taken over by the CCL layer, allowing a seamless progression in both segments.

Ouroboros, unlike conventional PoS, creates timeslots called an epoch. Each epoch has a slot leader chosen by other nodes in the slot. These leaders carry out block creation in each epoch, and each leader gets a chance to do it. This reduces congestion and increases TPS. 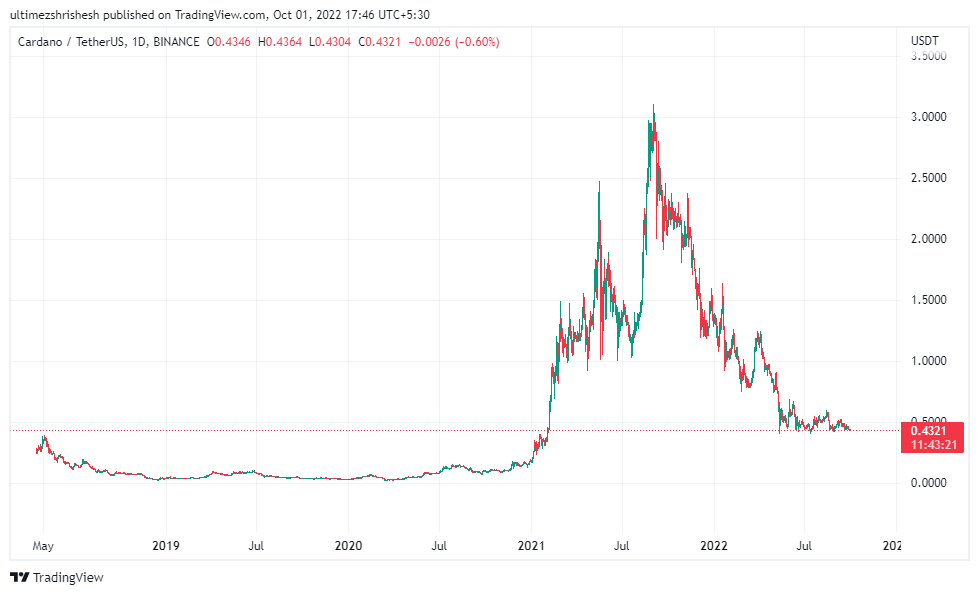 Cardano is still an ideal investment, with its stout developments and also considering the plethora of applications in the pipeline.

Cardano is not dead, as it is witnessing major developmental upgrades, which could boost ADA’s price in the near future.

According to our Cardano price prediction, the altcoin’s price could hit a maximum of $3.4952 by the end of 2025.

ADA is available for trade across prominent cryptocurrency exchange platforms such as Binance, OKX, Bybit, Bitget, and CoinTiger, amongst others.