Bitcoin’s Worst Days are Over, BTC Price is on a Bullish Uptrend

Since being rejected from the $24,000 important mark on July 29, the price of Bitcoin has had difficulty maintaining its upward pace. As it searches for new liquidity, the largest cryptocurrency is projected to fall to $22,000 and $20,000 levels.

Although, the worst for Bitcoin appears to be over, according to a well-known cryptocurrency analyst, as the investors’ appetite for risk has returned to the leading cryptocurrency. The host of InvestAnswers said in a new strategy session that Bitcoin’s price pattern indicates the asset is on a positive rise.

According to him, Bitcoin continues to make higher highs and higher lows. It hit the small bottom, but 50 days ago, the little range chart he was looking at started swinging upwards in zigzag patterns. Nearly picture-perfect, therefore the next question is: where should we go?

“I don’t know but it looks like many depths are being bought up. Hence, we have this pattern and this is typically a very, very bullish pattern, of course, until It breaks,” he added.

After that, the analyst displays a chart from cryptocurrency trader Washigorira, which he said suggests Bitcoin has already reached its bottom. He really likes this chart because it suggests that the historical bottom has been reached based on some important factors. 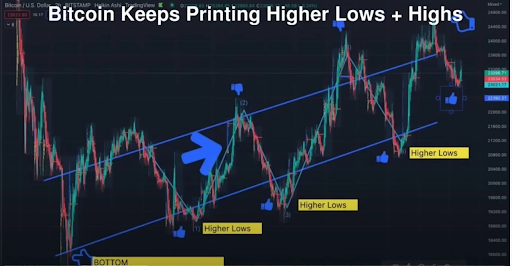 The price of bitcoin tested the red line and its 200-week moving average. It is the CCT BBO, and that is normally a good sign when it is below the zero level. The CCT BBO, or Cedar Creek Trading Bollinger band oscillator, was created by Steve Karnish and works well with bitcoin in this context.

Finally, the red line was seen passing over the green spots. That is one of Washigorira’s tiny magic signs, but it is another illustration of how confident things are looking.

“It looks pretty clear that the bottom is in as we go forward for Bitcoin, so those of you waiting for $12,000, as I said last week, don’t hold your breath”.