Bitcoin Wild Price Discovery Days are Now Over! This is What Next For BTC Price

On Monday, the price of bitcoin fell below $40,000, while other cryptocurrencies were in the red. This comes as investors remain wary of the situation in Ukraine and the potential of a rate hike by the Federal Reserve of the United States. The war crisis shattered public opinion even more. With a drop of 2% in the last 24 hours, the global cryptocurrency market cap was trading over 2% lower at $1.81 trillion.

The days of Bitcoin (BTC) surging over 1,000 percent and then plunging by 80%, according to a macro analyst are over.

Fidelity CEO Jurrien Timmer tells his 107,700 Twitter followers in a recent Twitter thread that the dramatic price discoveries that BTC price experienced during prior bull markets are likely to be a thing of the past as institutional investors adopt the main cryptocurrency.

Until recently, Bitcoin would often overshoot its intrinsic value to the upside during bull markets and to the downside during bear markets. It was a momentum game with little to no resistance, until the trend reached exhaustion. /3— Jurrien Timmer (@TimmerFidelity) April 20, 2022

“Until recently, Bitcoin would often overshoot its intrinsic value to the upside during bull markets and to the downside during bear markets. It was a momentum game with little to no resistance until the trend reached exhaustion.”

According to Timmer, Bitcoin is now following a demand curve based on network expansion or the number of people flocking to BTC.

The fundamentals of Bitcoin are depicted in the graphic below. The S2F model (stock-to-flow) determines the supply curve, whereas network development (Metcalfe’s Law) determines the demand curve. In recent months, the price of Bitcoin has deviated from the S2F model, hugging the pink line instead (demand model). 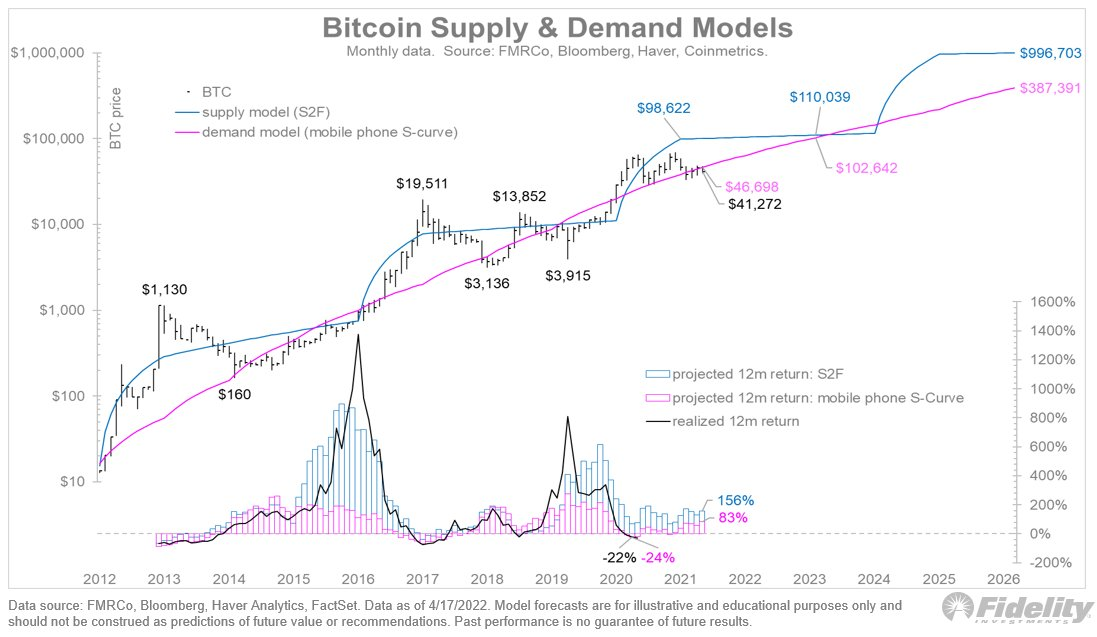 The demand model, according to Timmer, makes Bitcoin an effective two-way market in which investors accumulate BTC during price corrections and efficiently unload BTC during asset rallies.

Bitcoin’s price fell below $40,500, putting it in a negative zone. Near the $40,000 mark, the first substantial resistance is building. The price must settle above the $40,500 level to begin the upward trend. If bitcoin fails to break over the $40,000 resistance level, it may continue to fall.