The most prominent and leading crypto token is having a rough time this year due to the historical crypto market crash in May. Bitcoin price has lost more than 60% since the beginning of 2022. According to a recent tweet by a prominent crypto strategist Toni Ghinea, BTC price may drop to the bottom line in the chart and trade between $9K to $13K before gaining a positive momentum by the beginning of 2023.

Bitcoin price is struggling to break the $20K level after it significantly dropped on 6 October. It is now starting a fresh decline to 18K as it has been affected by several macroeconomic factors including the CPI data.

Toni Ghinea, a popular crypto strategist and analyst, predicts that BTC price can soon make new lows and hit the bottom line in Q1 of 2023. He previously predicted that Bitcoin would fall below the $16K level in the next 3-6 months, and eventually, it is now turning out to be true! 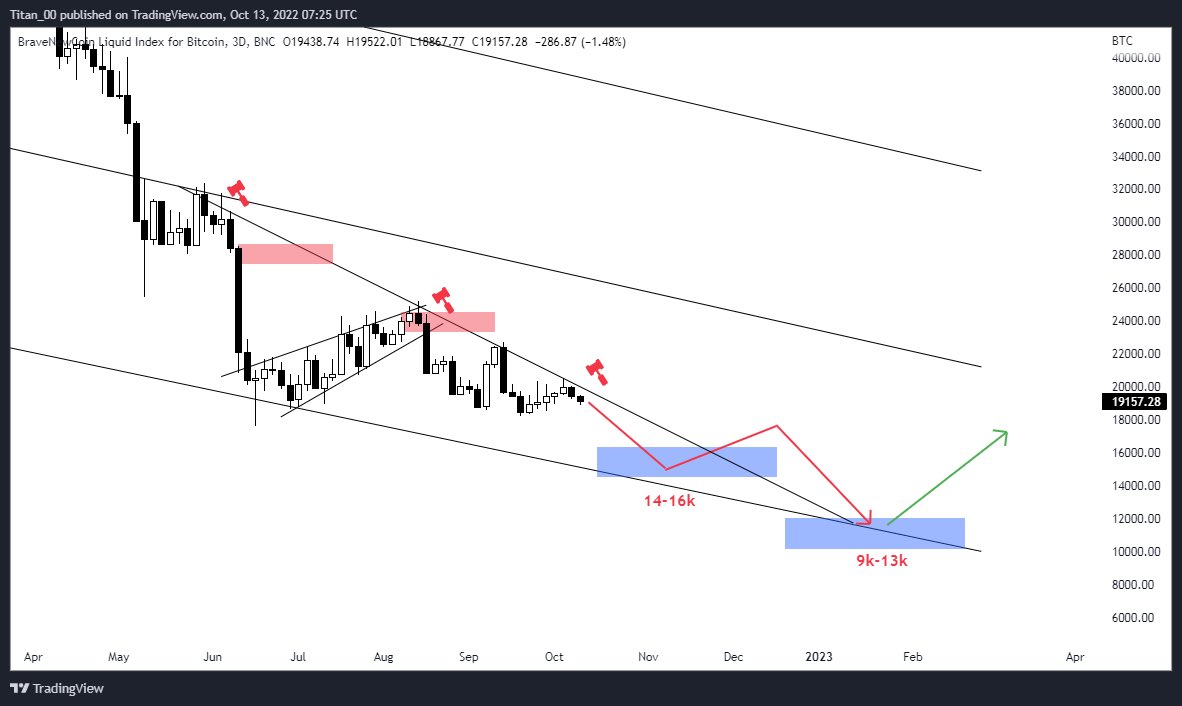 According to him, Bitcoin is predicted to reach a price level between $14K to $16K by the end of November. However, BTC will make a slight upward reversal to $18K before significantly dropping further between a price level of $9K to $13K in Q1 of 2023. The analyst has given a slight relief as BTC may project an upward trajectory above $18K by the beginning of April 2023.

How Will The Bitcoin Price React Next?

The Bitcoin price has slid down near its crucial support level after falling from $20K last week. Bitcoin is witnessing a slow and steady decline below the $19.5K pivot level and SMA-100 (simple moving average) trend line. As Bitcoin is correlated to the US stocks, its price can plummet more following the general market’s reaction.

The Bollinger band’s upper limit is at $19,400, where EMA-100 is currently trading, and it is near the 23.6% Fib retracement. To make an upward move, bitcoin investors need to buy in the dip and push its price above the immediate resistance level of $19,400. If Bitcoin successfully holds its price above this level, we can again see a $22K price range.

However, the bullish momentum is not expected to happen anytime soon as the RSI-14 trades at 37-level, hinting at a selling pressure due to the US stock market. The MACD line is also going downward and trading below its trend line. If bitcoin price falls below the $18K level, it can further push its price to the downside and trade near the next support level at $17,500.