Bitcoin price after it slashed from $44K, began its rebound along an uptrend line. The price sliced through the trend line and ignited a significant bearish trend. Moreover, each attempt of the price regaining the levels failed, hence stuck up in a deep bearish well.

A huge possibility of the BTC price shedding more than 50% arises as the Death Cross may be around the corner. It is been observed previously in 2015 and 2019 that whenever the event occurs in the 3-day chart, the price slashes by more than 50%. After a huge gap, the asset is again approaching a similar situation where-in the price could drop below $25,000.

There were mixed responses for the analyst to the prediction. While some believed a Death cross may be imminent that could slash the price close to $28,000. Some other set of followers believed Death cross may not largely impact the BTC price. But on the contrary, another factor that may lead to a significant drop is the surging hash rate. 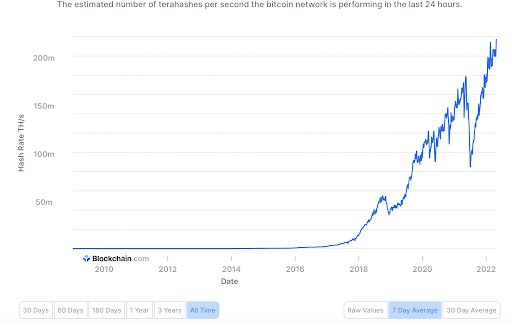 The Bitcoin hash rate has reached its peak, smashing new highs of 223.152 TH/s, making it extremely difficult for the miners to mine. The hash rate usually refers to the amount of computing and process power being contributed to mine a block of BTC. Whenever the Bitcoin hash rate increases, the computational power required to mine new blocks also increases. And hence it results in squeezing of profits.

As the rewards are paid in BTC and as the price is consolidating hard, it may be a huge loss for the miner which may even compel them to close mining too. And in such cases, as fewer miners are available to mine, it may inversely impact the Bitcoin price in the coming days. And hence as predicted by the analyst, the asset may witness a steep drop very soon.